VISIT TO THE NETHERLANDS DEFENCE ACADEMY 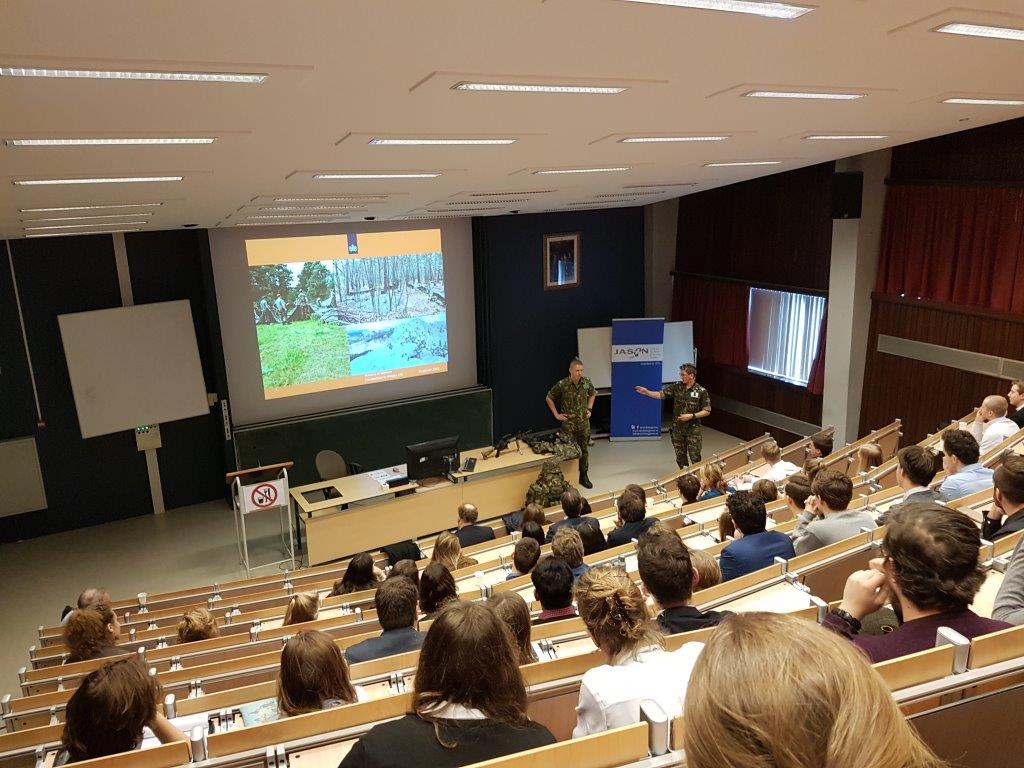 Thursday 25 January, the JASON Institute was invited by the Netherlands Defence Academy in Breda for a half day programme of interesting lectures about the officer education and training programmes, and cyber security, cyber warfare, and the European security after 2014. After we were welcomed with a lunch at the Breda Castle we headed, under guidance of Air-Commodore Prof. Dr. Frans Osinga, to the lecture rooms. Here, we started off with an introductory lecture by history Prof. Dr. Wim Klinkert who provided us with some background information of this historic venue. For example, the castle was built in the 14th century and in 1536 it became the property of Prince Henry III, making this castle the oldest possession of the Dutch Royal family. It was a fortress during the 80 Year’s War against Spain and became under French control during the Batavian Republic. After this period, it was returned to the Royal family in the early 19th century and it was turned into a military academy where they started to study warfare through books instead of primarily on the job (out in the fields. For the first time in Dutch history, military and theory met and the academy, until today, plays a vital role in the education of new military officers. This has especially been the case since the 1960’s when officers were obliged to obtain an academic qualification before they could become an officer,  as warfare became more complex and ‘military officer’ a profession.

In order to paint a general picture of how an officer training looks like, the cadets Glenn Horsten and Tim van Lit presented a short overview of the programme and its content. The first weeks of the programme are spent at the academy to get acquainted with the military skills and drills, such as using weapons, using military first aid, how to deal with Chemical Biological Nuclear (CBN) situations, and how to read a map and plot coordinates. After studying the theory, it is time to use this knowledge in practice when the cadets go out into the field. Here, among others, they learn how to command and control: getting the order, analyse it, execute the order. This way, the future officers learn to take the lead, make their own plan, finalise it, and make their own men execute the plan. Moreover, being in the bare sky and sometimes freezing cold, they become conditioned to tough situations in which they learn to survive with minimal material which is all packed in a backpack of approximately 20 kg’s.

After these introductory lectures about the location of the academy and its officer programme, we moved on to the domain of cyber security. First speaker Gen. Prof. Dr. Paul Ducheine taught us about cyber operations. Although such operations only emerged the past 15 years and is academically very novel, it plays an important role in our daily lives now that we are all deeply connected with the cyber space. This is not different in the case of our national securities which should protect and guarantee physical, ecologic, economic, social, and political securities, as well as territorial integrity. Now that technically everyone in the world could move ‘freely’ within this cyber space behind the façade of their cyber id’s, it has completely changed our lives. Ducheine gave the examples of reading the newspaper, shopping, dating, and studying. Today, internet enabled us to do such things online. Moreover, in 20 years time, the world’s biggest companies moved from oil related companies to those in the IT sector. However, beside the upsides of cyberspace, it also changed the playgrounds of (national) securities. It has created new opportunities for espionage, sabotage, theft and crimes, and cyber warfare which is answered with new types of protection, law enforcement, intelligence, and cooperation to reinforce ‘our’ cyber security.

Lastly, Frans Osinga concluded the lecture by telling about former and current security challenges, giving a concise overview of how warfare has changed over time. Since the 1990´s we had entered an era in which we tried to distance ourselves from war, using economies and diplomacy and in which we would only go to war if the UN said yes. A growing aversion to war and human casualties resulted in Europe´s movement towards soft power and the US started to fight wars from distance, with less man force on the ground and less civilian casualties because of their ability to strike very small and precise targets from a long distance. However, Europe and the US have changed its direction after 9/11 and started to go to the roots of problems and threats. They started to intervene in fragile states (e.g. Afghanistan), where terrorism, weapon logistics, and smuggling illegal commodities comes from, to promote the 3 d’s (Defence, Development, and Diplomacy) in order to stabilise such states and its regimes. Further, Osinga emphasised that despite the fact that war does not solve anything, it does change things and creates new opportunities and that it is important that we must give war a change to make things work.

Finally, Osinga touched upon the post 2014 era in which Russia plays an explicit role, saying that it is not an optimistic era in which the NATO is pressured by Russia’s global military and political presence. For example, Russia is causing unrest in the Balkan and tries to recreate a new buffer zone by making the Balkan states moving away from the NATO. Moreover, Russia is feared for the fact that its nuclear weapons are controlled by generals and not politicians, and their ability to influence national politics by means of cyber warfare, which will most likely influence our politics and security policies for the nearby future.

After an eventful day with many interesting lectures, we ended the day with some drinks at the castle while we continued to discuss the subjects of the lectures. Thank you for your presence and interest and we hope to welcome you again at our next event.