Uncertainty Prevails: Looking at Russia’s Options in the Ukrainian Crises 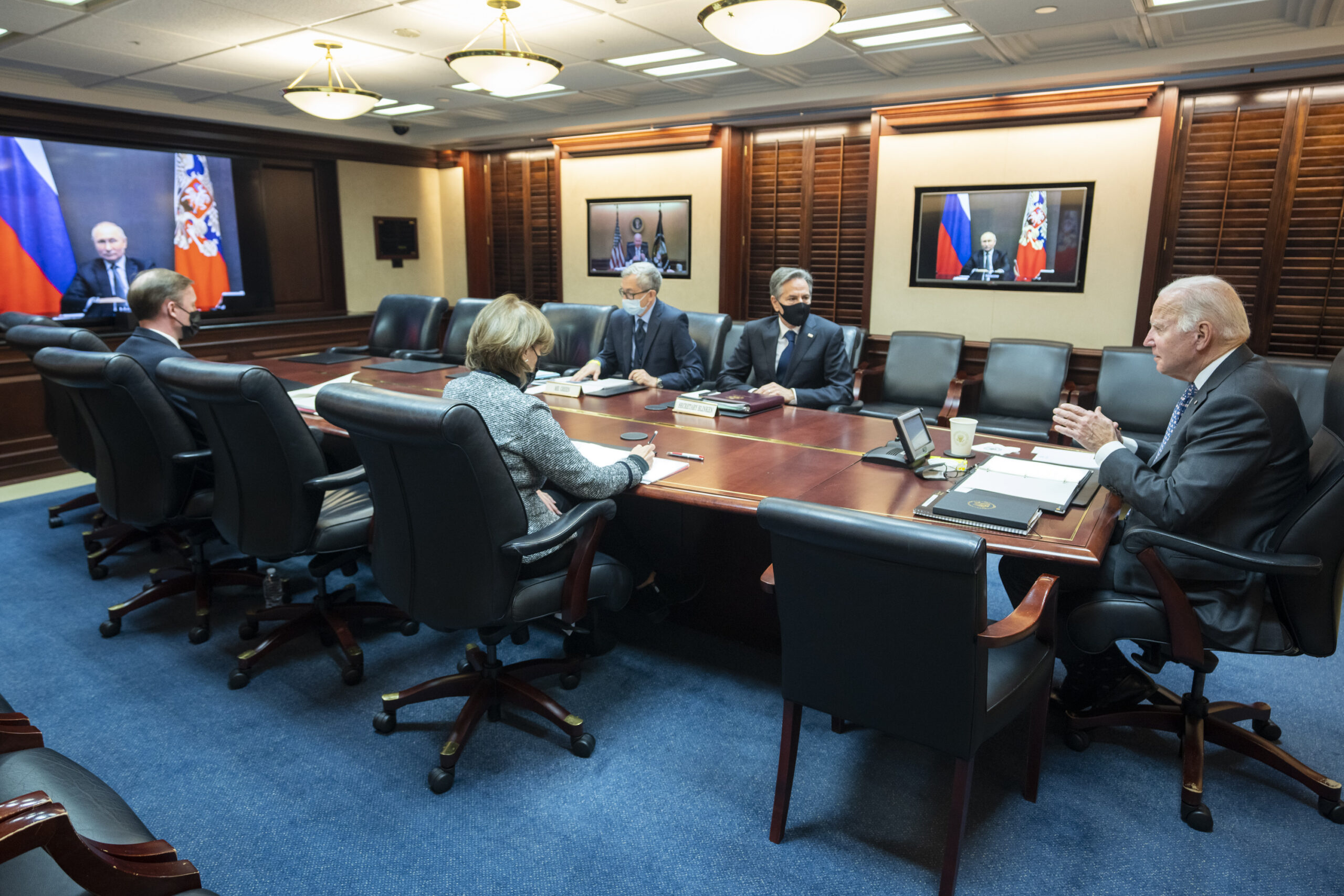 by: Lt. Gen. Jan Broeks (Retd.), Advisory Board member at the JASON Institute

By mid-November 2021, the United States Intelligence community started sharing their indications on Russian military build-up on the Russian-Ukrainian border with the European Allies. This did not come “out of the blue”.  As a consequence of the spring exercise cycle in the Southern and Western Military districts, a similar build-up was observable. In concluding these exercises, a large amount of material and weaponry remained in the vicinity of the Ukrainian border.

Since early November, a substantial military build-up could be observed in several locations in Russia itself, but also close to the Ukrainian border, and on the Crimean peninsula. Reportedly some 100.000 military with main battle tanks and advanced rocket systems. On January 20, Russia announced that amid this build-up near the border with Ukraine and massive joint war games with Belarus, it would also conduct manoeuvres involving the bulk of Russia’s naval potential. These exercises will involve over 140 warships and more than 60 aircraft. They will be conducted in both littoral waters and more distant “operationally important” areas, including the Mediterranean, north eastern Atlantic and the Pacific Ocean.

Now the International Community is asking itself what Putin’s intent is, what he wants to achieve and what is he signalling by moving his forces to Ukraine’s borders. At the same time, it is clear that Putin is not aiming at a direct military confrontation with NATO. Hence, an armed conflict on NATO-territory is still remote, even if Putin’s actions result in an armed conflict with Ukraine.

The current crisis can only be assessed through a more holistic lens. It is directly related to the Soviet Union break-ups in 1991. This left Russia surrounded by independent countries. Putin has a genuine concern that if any of these states becomes a successful and prosperous democracy, the Russian people will demand the same, making this is a direct threat to his rule. He is genuinely afraid of the so-called colour revolutions in Georgia and Ukraine in the early 2000s. Putin is creating more or less control over the neighbouring states by having them run by strongmen dependent on Russia to stay in power. He cracked down on popular discontent and widespread public protests at home in 2011-2012. In 2014, when Viktor Yanukovych, the Russian-backed president, fled Ukraine after the Maidan protests, he annexed Crimea and sponsored a ‘proxy-insurgency’ in the Donbas region. In 2020, Putin backed Alexander Lukashenko’s suppression of peaceful demonstrators protesting against fraudulent elections in Belarus. In January 2022, the Russian president sent troops into Kazakhstan to halt another uprising. Putin’s highest priority is to remain in power forever, and therefore he drives the totality of Russian foreign policy, its strategy, its set of motivations and interests.

Putin also realises that he cannot sustain his powerbase on violence and intimidation alone. Therefore, he introduced a unifying purpose that would appeal to a considerable part of the Russian population. In his speech for the occasion of Crimea and Sevastopol formally joining the Russian Federation he used the concept of a ‘divided nation’.  Recently, he returned to this in his 5000-word article, entitled “On the Historical Unity of Russians and Ukrainians”, published on July 12th.  Putin argues that Russians and Ukrainians are “one people” and blames the current collapse in bilateral ties on anti-Russian [i.e., Western] conspiracies.

In 2015, Moscow released the Russian National Security Strategy, a document on the country’s priorities, interests and threats. It shows the country’s broader effort to leverage all available instruments of power to shape the international system to work in its favour. Specifically, Russia’s Grand Strategy targets three elements: creating a new, more favourable balance of power in the international system; broadening access to new markets for funding and exports; and actively exerting influence in the former Soviet region.

Russia’s overarching aim is to rearrange the current Western-oriented international system. Other powerful actors need to respect the interests of the Russian state. To this end, an international order needs to be created that would make the Russian state a partner equal to the United States, the European Union and China. Diminishing the international reach and impact of the “West” is central to this. This means challenging NATO’s resolve and solidarity amongst nations, fuelling EU discord and conducting non-attributable hybrid activity in nations. Starting from a “zero-sum game” [“I win if you lose.”] perspective Russia benefits when Western security, political and economic institutions operate in uncertainty.

The second focus for Russia’s Grand Strategy is to create cash inflows to the state treasury by accessing export markets for weapons systems and oil and gas.

The third step is for Moscow to influence and project power in the traditional sphere of influence and new areas. Russia seeks to shape the foreign policies of neighbouring states and heavily put pressure on their governments.

Putin and his military nurture this mutual dependency. Putin needs the military, as an instrument of power, to preserve his internal power and achieve his external policy aims. The military, in turn, benefits from the restoration of its prestige and military capability.

Historical evidence showed that invading enemy’s, such as Napoleon and Hitler, have caused massive destruction in Russia/the Soviet Union and the defeat of its military. This led to the principle to never fight another war on Russian territory; future wars will be waged on the territory of another state.

Crucial to Russia’s military thinking is the principle that Russia will only be more secure if this goes at the expense of the security of others and the intent to control the strategic initiative from the strategic competition through crisis and conflict.

So, Russia’s approach to security is different from the West’s approach. The West’s approach sees the military instrument as a means of last resort whilst the Russian approach to war avoidance is based on decisive, dominant superiority in preparations and posturing of forces at the outset of a crisis for strategic operations – not necessarily their employment – to reduce the number of options for an opponent to wage war against Russia.

What is Russia Demanding?

Mid December, Russia has published a set of demands to the US and NATO. These demands turn back the clock and rewrite the architecture and principles upholding European security since the end of the cold war and would end all prospects of Ukraine or any more former Soviet states joining NATO.

Moscow’s demands on NATO are clear.

A separate treaty with the US would require each side to keep their bombers, naval vessels, and missiles out of striking distance of the other party, as well as limiting all their nuclear weapons to their own territory. The US would also pledge not to set up bases in any former Soviet countries or partner with their militaries.

The response from all involved parties, the US, NATO, and NATO allies, was clear and cohesive. There will be no compromise on the key principles of European security. All countries have the right to decide their own future and foreign policy free from outside interference and the need to address NATO’s concerns about Russia’s actions in and around Ukraine.

What are the Possible Scenarios?

How will this Unfold?

Observing the dynamics from a holistic perspective still makes it difficult to predict the outcome as the force build-up continues. Diplomatic conversations continue between the US and Russia and NATO and Russia and the resumption of the talks in the Normandy-format revitalising the Minsk-II accords. Russia continues to go at Western cohesion by declaring that the US response to the Russian proposals offers more perspective than the NATO answers. It knows that these answers have been coordinated. The EU response is heavily divided, and there is no consensus between the US and Europe on possible economic sanctions.

Concurrently the Russian Duma is discussing the possibility the formally recognise the People’s Republics of Donetsk and Luhansk as sovereign and independent states. The Ukrainian president Zelensky now calls for restraint from western leaders to not provoke his Russian opponent. A balanced approach is needed. Zelensky will have a hard time selling to his country an eventual Minsk-II accord giving some sort of self-rule and autonomy to Donetsk and Luhansk. There will be western responses if the Duma decides to recognise both Donetsk and Luhansk. However, they might not be as harsh compared to what would happen after a military invasion; so, Putin might calculate this in knowing that the impact on the Russian economy will not be that huge. However, this would implicitly mean that Ukraine never will become a NATO member. Allowing Ukraine in, which has a severe security problem inside its own borders and is facing a confrontation with Russia, would make the Allies think twice!

Uncertainty prevails and continues. There is not a single board of chess where this game is played out. Different topics are discussed at several tables with different participants, but they are all related. In the meantime, there is always the risk of miscalculation or not being able to restrain oneself. Diplomatic efforts now need to build trust and a proper atmosphere for dialogue followed by confidence and security-building measures, including reducing the arsenal of heavy weaponry. The West has to increase its coordination and keep up the support to Ukraine, showing that with this Russian behaviour, Ukraine has friends and Russia has not. But undeniably, Russia or Putin is back at the table, and there is no way to go around him. He has put a line in the sand to further NATO’s expansion, despite the Western conviction that Russia does not have a veto.