Troubles in the ”Marvellous City” 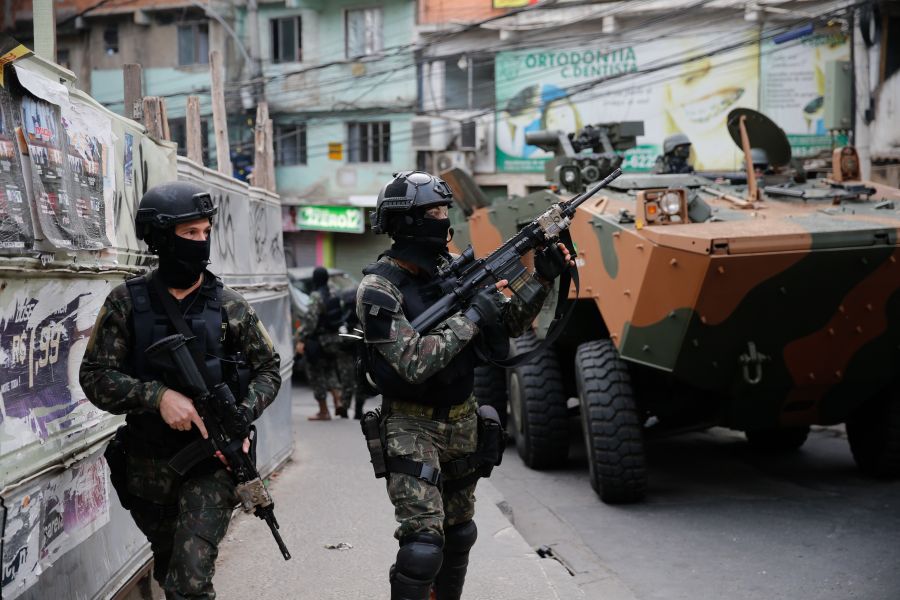 “Cidade maravilhosa” meaning marvelous city, also known as Rio de Janeiro. What first comes to mind when one thinks of this, as the locals refer to it, marvelous city, are the Rio carnival, Copacabana beach, almost perpetual sunshine and the recent Olympic Games. However, the city has also seen escalating levels of violence with national TV news bulletins broadcasting footage of heavily armed gangs robbing tourists and the death of three police officers during this year’s carnival. The level of violence led Brazilian President Michel Temer to equate it to “a cancer” and outlining that organized gangs had all but wrested control of the state of Rio de Janeiro [1]. Having received an appeal from the governor of the state, President Temer signed a decree on the 16th of February, ordering the military to step in and take charge of the security arguing that he was “taking this extreme measure because the circumstances demand it” [2].

Under the Brazilian Constitution, military intervention in a state can be activated for a number of reasons, including when a foreign country invades Brazil, when the government wants to avoid secession or when there is a “grave” threat to public order [3]. Within a number of days later, the National Congress approved the presidential decree with an overwhelming majority. However, it is important to bear in mind that the decree falls short of a full-scale intervention in the state government since the governor will continue to run the state government of Rio de Janeiro [4]. The decree assigns however wide authority on the military to reinstate order. Furthermore, it also places police forces under the command of a general who is overseeing military operations in the eastern parts of the country [5]. The intervention marks a watershed moment since it is the first time since Brazil’s return to democracy in 1985 that the federal government has intervened in a state [6].

When one dissects the level of violence in Rio it is integral to remember that it is not as severe as in other parts of the country, however, it is one of the country’s most well-known cities and the level of insecurity has intensified in recent years especially after having hosted the Olympic Games in 2016 [7]. In the years leading up to the Olympic Games, the state government invested substantial resources in security related initiatives such as the implementation of Pacification Police Units, dispatching police units into communities plagued by gangs and violence. They were followed by the launch of social programs with the aim of reincorporating the communities into the social fabric of the city and establish bulwarks against the spread of criminal elements. The initiative did initially show signs of bringing areas under state control and decreasing the level of crime, however, as the city commenced to struggle financially during a recession hitting the whole country, the initiative faltered [8].

The police budget of the state decreased during recent years due to a multitude of factors such as the recession, a downturn in the price of oil together with high levels of corruption [9]. The financial problems have only emboldened criminal gangs. The homicide rate is at its highest since 2009 and a truck is robbed every hour in the state, crime in turn affects businesses and growth [10]. Whilst the national economy experienced growth of 1% during the last year, the economy in Rio contracted by approximately the same percentage point due to a sharp downturn in the services sector and civil construction and it is expected to be among the last ones to emerge from the recession [11].

The military intervention is largely popular among the residents of the “Marvelous City” and Brazilians more generally, and the government of President Temer has touted federal intervention as the best way to address the current situation, outlining that the city and policies there could serve as a blueprint for other parts of the country [12]. However, militarized responses to rampant criminality has been widely criticized for being ineffective, leading to human rights violations. Rio’s problems are far too complicated to be solved by just the deployment of the military [13]. Criticism has been levelled towards the military for not having the capacity, training to tackle security problems that exist in Rio since public security depends mainly on investigations, and the military does not investigate. Leading a sociologist at the Violence Analysis Laboratory at Rio’s state university to ask, “When it [the military] arrives in the community, what will the Army will do? Shoot?” [14]. Nevertheless, it is highly likely that the military intervention will continue throughout the year and the next question will then be if it will be implemented in other parts of the country too.

[3]. The Constitution of the Federative Republic of Brazil: http://english.tse.jus.br/arquivos/federal-constitution

[4]. Brazil’s military is put in charge of security in Rio de Janeiro: https://www.nytimes.com/2018/02/16/world/americas/brazil-rio-military-security.html

[6]. Brazil is taking an ‘extreme measure’ to confront crime in Rio — the first time it’s done so since the country’s dictatorship fell: https://www.businessinsider.nl/brazils-army-taking-over-security-in-rio-de-janeiro-2018-2/?international=true&r=US

[7]. Brazil has committed to an ‘extreme measure’ to combat crime in Rio — and it could be a model for the rest of the country: http://www.businessinsider.com/brazil-military-intervention-rio-security-national-model-2018-2?international=true&r=US&IR=T