The Rise and Fall of the Women of the Islamic State. 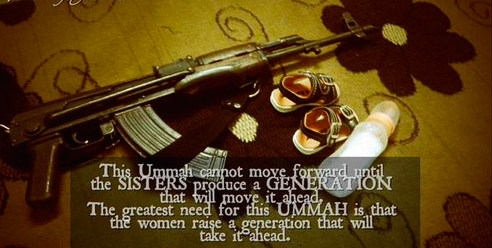 In 2015, the world was shocked when many Western women, young and old, decided to give in to the siren’s call of the newly established caliphate, comprising of parts of Syria and Iraq. Traditionally, women have been regarded as nurturing, caring and peaceful, which meant that women who travelled to the Islamic State must be naive or hoodwinked. The stories of women who migrated to the Islamic State followed the ‘Jihadi bride’ narrative all too often. The participation of these women is often reduced to the consequence of grooming and does not attribute any agency to these women, whatsoever. The women who travelled to Iraq and Syria were seen as submissive, compliant and obedient – a far cry from the actual roles these women fulfilled within the Islamic State’s caliphate. Even though the women did not necessarily partake in violent activities, they did contribute to the establishment and growth of the caliphate, choosing to do so as independent, rational actors.

The role of women in the Islamic State

Throughout the years, many women have joined terrorist or violent groups: women who joined the Rote Armee Fraktion and National Socialist Underground in Germany, the Chechen Black Widows or the fighters in Sri Lanka, India, and the Middle East. [1] The women who travelled to Syria to join the Islamic State were therefore rather an old phenomenon related to a relatively new violent organization. What were the roles of women within the Islamic State? This is an important question to examine since a large number of these women are, now that the Islamic State’s Caliphate has been defeated, pleading for a safe return to the western countries they so hastily left. If we view these women as naïve, compliant bystanders, we disregard their agency and with that, we nullify their choices and responsibility. Within the borders of the Islamic State, gender segregation was very important, which means there were specific roles assigned to women and men.

Many contemporary jihadist ideological leaders did not allow women to take part in the jihad (the religious struggle). According to research carried out in 2018, “traditional gender norms are dominant in jihadist ideology and conservative societies, and the consequential risk of losing popular support when putting women in harm’s way, might explain this reluctance to employ women in combatant missions.” [2] Often, the fact that women would undertake violent actions to propagate the existence of the Islamic State, would be used as an incentive to get men to do the job. In Dabiq, the online magazine of the Islamic State, the San Bernardino shootings were mentioned, where a husband and wife swore allegiance to the Islamic State, before murdering fourteen people. Regarding the role of Tashfeen Malik, the female San Bernardino shooter, Dabiq stated the following: “And the brother’s blessed wife accompanied him despite the fact that combat is not even obligatory upon her […] at the time of when many ‘men’ of the Ummah [muslim community] have turned away from the obligation of Jihād.” [3] This quote exemplifies the uniqueness of women partaking in violence, therefore shining a light on the roles women fulfilled within the Islamic State.

Within the Islamic State, there were not many cases of women who fought alongside men or who committed suicide attacks. However, there are cases in which women did participate in violent activities, such as the more than eight hundred girls and women who were part of the Al-Khansaa Brigade. Shortly after establishing the Islamic State’s Caliphate, this brigade was also created. It was notorious for punishing women who violated the modesty laws. This brigade was not only using violence, but also had a supporting role in upholding the laws of the Islamic State.

Many of the women who migrated to the Islamic State, did so out of their religious conviction and believed they contributed to the establishment and growth of the Islamic State. For it to expand, there was a definite need for supporting roles. Even though these roles might be regarded as supportive, that does not mean that the women who fulfilled them were innocent bystanders. The roles ranged from recruiters to medics. Roles such as nurse, doctor, and teacher were specifically needed due to the strict gender segregation: women were only treated and taught by other women. One prolific woman, a doctor within the Islamic State, was known online as ‘Shams’. She often wrote about her role and the need for educated people in the Islamic State on her personal social media accounts. [4] This closely connects to another supporting role women often fulfilled: that of recruiter.

Many of the women who migrated to the Islamic State were very active on social media and blogs. These blogs and social media accounts have all been deleted, due to the content these women posted. However, some of the content has been used in various articles and provides a source of information. The women often issued “practical advice to those wishing to travel and, as such, are key to ensuring that ever more women travel to join IS.” [5] The women talked on social media about their daily lives and the reasons they decided to leave their respective western countries. The online magazine Dabiq dedicated sections to these women. [4] The women within the Islamic State were placed on a pedestal and were promised a righteous life, adhering to the sharia law. One woman stated online that “however sisters I say this with sincerity, being a wife and taking care of your duty (kids) in a place controlled by the shariah is beautiful.” [6] It is clear that this message is directed at people who were thinking of moving to the Islamic State. This woman talked about her domestic life in a loving way, and she fulfilled her religious duty in doing so. She was of importance within the Islamic State: the message the Islamic State tried to convey was that women were important and valued, a message that resonated with many of the women who chose to migrate to the Islamic State.

One of the main roles of women within the Islamic State was the role of mother and wife. When unmarried women first arrived in the Islamic State, they were obligated to stay in a house with other unmarried women, a maqqar. When a woman found a suitable husband, she moved into a house with him. Thus, these women lead a primarily domestic life, with one woman stating that “the best thing for a woman is to be a righteous wife and to raise righteous children” and that “a normal day for a Muhajirah (female fighter) revolves around the same duties as a normal housewife.” [5] Aside from being a wife, motherhood was also an important facet of their daily lives. The women were responsible for the expansion of the Islamic State’s Caliphate by being mothers to the new generation of fighters. These ‘cubs of the Caliphate’, the children born and/or raised in the Islamic State, were trained as fighters during the heydays of the Islamic State. Mia Bloom, a scholar specialized in female terrorism and child soldiers claimed that “to ISIS, children are not just valuable propaganda: they are fullfledged militants who can kill.” [7] This shows the importance of the role of motherhood; since this was one of the few ways a woman could actively contribute to the expansion of the Islamic State.

It is a difficult case for these women to return to their home countries. Most Western governments are not actively helping them to get back to their respective western countries, but many countries do not know how to deal with them. The United Nations Security Council suggests that Member States should “consider the different roles played by women” and that this requires “special focus when developing tailored prosecution, rehabilitation, and reintegration strategies.” However, they also urge to take into account that some of these women might have been victims of terrorism. [8]

The future of female fighters and female supporters

Women who have supported the establishment and expansion of the Islamic State did so in a myriad of ways. They were part of the Al-Khansaa brigade, threw themselves into domestic life and motherhood, actively recruited new women and new fighters or carried out supporting roles within the Islamic State. These roles should not be diminished and contributed to weak, naive followers, but we should take into account the agency these women have and the support they have shown for the Islamic State. Oftentimes, these supporting roles are just as important as the roles men have fulfilled.

Many western governments are struggling with the consequences of the defeat of the Islamic State. Currently, most European governments do not actively participate in the repatriation of these women, which means that many of them remain in Syrian or Iraqi refugee camps, awaiting what their future holds. If the women return to the countries they grew up in, a thorough investigation should be carried out to assess the roles they played within the Islamic State.

Some of the women still hold on to their zealous beliefs, whereas others are pleading to western governments to let them return. If they do, we should not underestimate the roles and positions they fulfilled and the contributions they made to the expansion and growth of the Islamic State. Once we start to see that some of these women actively participated in violent extremist organizations, instead of diminishing their roles to passive participation, we can focus on the way they can return to western societies.

[2] De Leede, S. (2018) ‘Woman in Jihad: A Historical Perspective’ The International Centre for Counter-Terrorism, The Hague 9.