THE RE-RISE OF EUROPE 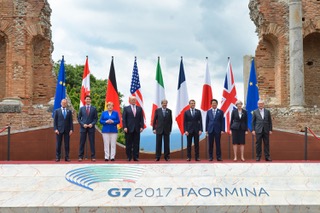 This could in fact be a blessing in disguise. Europe has suffered greatly in the last few years, as the Eurozone crisis and the banking crisis have left its marks on the continent. The decision of the British to leave the European Union has had a great impact, possibly creating incentive for other countries to also leave the European Union. However, since the election of Macron, there has been a reversal of this trend. It seems as if Merkel has realised that she should increase the cooperation within the European Union and in this case especially France.

Macron is increasingly profiling himself as a capable leader, trying to reassure France his leadership in the world, after years of financial crisis and government inadequacy. This is mostly received as a sign of relief, after the inadequate leadership of President Hollande. Even more important is France’s commitment to the European Union, which was clearly illustrated when Macron was in Brussels to meet the other European leaders and the American President, obviously choosing to take his time to greet the other European leaders, while leaving the American President waiting [3]. This and the way which Macron was shaking the hand of President Trump, has led many analysts to see Macron as symbolically establishing his leadership [4].

This in combination with the influence of Merkel, could indicate a growing European cooperation, and not a moment too soon. Having survived the challenges of the Eurozone Crisis and the rise of populism, the European Union needs to prove that the idea of a European Union is still viable. The idea of proving that the European Union can be a success has only increased in response to the growth of Eurosceptic populism in European countries.

A European Union which will have to work together on the topic of climate change has only become more important since the United States decided to leave the Paris agreement (5). It will need to work closely on immigration as well; while the number of immigrants coming through Turkey and the Balkan route has greatly reduced, immigration from Africa will continue to play a big role. Cooperation between European countries will be necessary to ensure proper treatment and protection of economic migrants.

While these issues are important, the European countries will also have to increase cooperation in security matters. Not only to protect themselves against terrorism, but also against threats from other countries. France has experienced many terrorist attacks in the recent years, it is vital for a country such a France, to work closely together with other countries, to prevent terrorist from entering and planning their attack. But most important, it will need to re-establish trust between itself and its citizens. People are putting their faith in pro- European parties, the Dutch, the French and the German elections have proven that, it is however time that this trust will be repaid.

All this cooperation will seem possible with a new wind in Europe. While I am generally not an optimist, I do believe that the European Union is standing at their cross road, that the decisions made now will impact whether or not the European Union will become a success.