The Rapid Escalation of Popular Protests in Chile 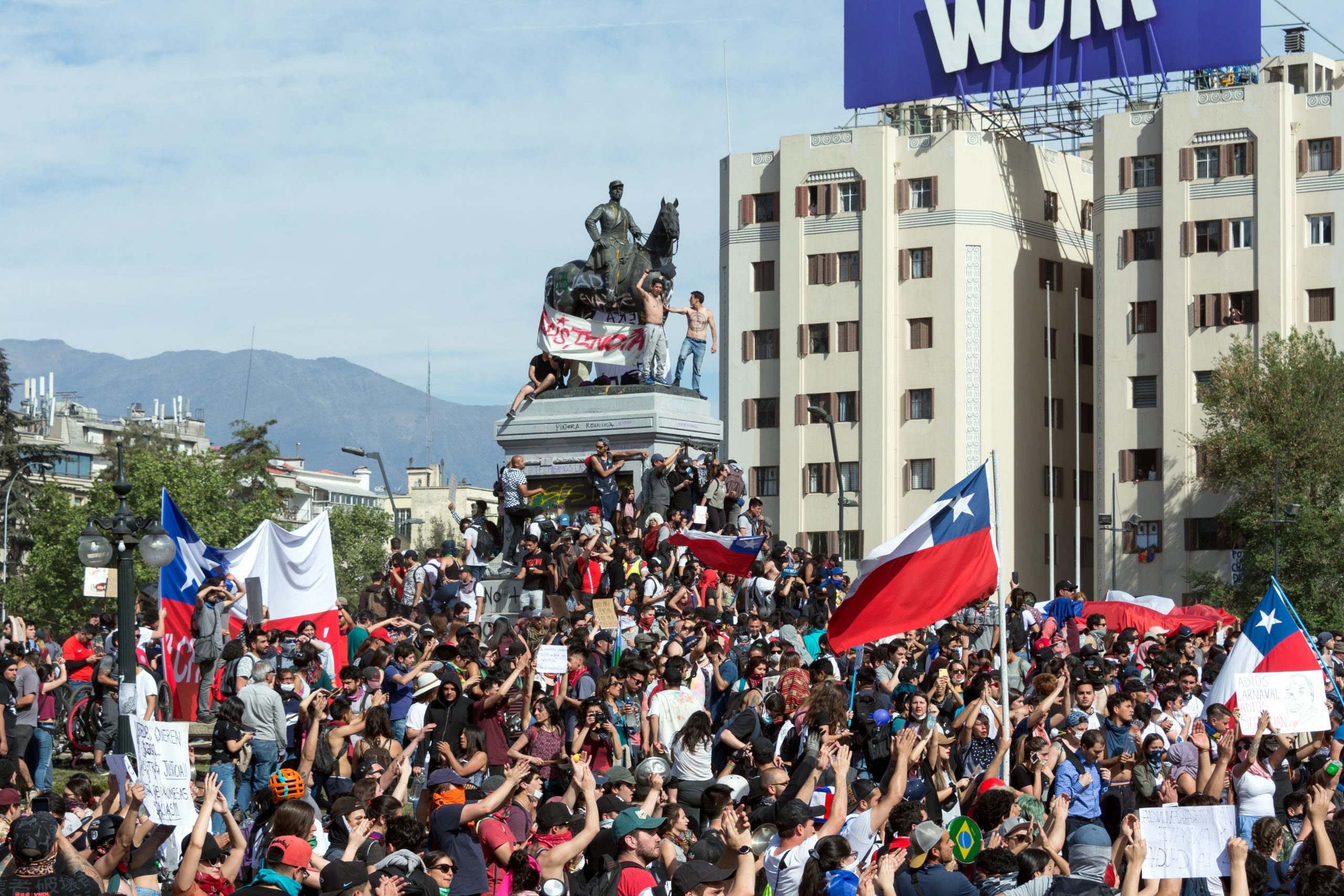 October 2019 saw the rise of a large protest movement in Chile, often considered to be the most politically stable and economically developed country in South America. The protests started as a reaction among high school students to an increase in metro fares, but soon grew to include a wider array of demands, including a restructuring of the governmental body and its social welfare policy, and the rewriting of the constitution. The latter has been especially controversial since a significant part of the current constitution dates back to 1980, when a military regime led by General Augusto Pinochet ruled the country. Thus, protesters adopted the slogan “it’s not 30 pesos, it’s 30 years,” referencing the end of the dictatorship in 1990.

Although the protests started peacefully, confrontations with the police as well as looting and arson were soon to follow in Santiago and other major cities. Aiming to gain a firmer grip on the situation, President Piñera opted to declare a state of emergency. But this served only to further escalate the situation and polarize the already divided Chile. Why was this the case, and how can Piñera’s response be understood from a historical and regional perspective?

The escalatory impact of Piñera’s response

One principle in the literature on crisis management is that during societal crises, government leaders are expected to react and “restore faith in a core set of values and beliefs”. This is meant to reassure the public that the situation is being taken seriously and is under control. In forming their response, governments should take into account ‘societal limitations’ concerning what is appropriate. Examples of such limitations include social conventions, historical frames of reference, and earlier speech acts.

When Piñera declared the state of emergency on 20 October 2019 he announced a wide deployment of the Chilean army in the streets, which together with the police included 10,500 forces in Santiago alone. The President was clear in the scope of his intervention by comparing the protesters with “criminals” and stating that “we are at war against a powerful enemy who is willing to use violence without any limits”. The fact that he gave the speech from within the Chilean army headquarters, surrounded by military officers, only added to the severity of his message and showed his willingness to use force if necessary to restore order.

The large military deployment caused fear and anxiety among many Chileans. For them, this was a reminder of the painful era of dictatorship: soldiers had not been on the streets in such numbers since 1990. The sometimes excessive use of force employed by the security forces through water cannon, tear gas and rubber bullets led to even greater popular indignation. This too was a reminder of the Pinochet regime which had never allowed meaningful protests and had met such gatherings with harsh reprisals including arrests, torture and disappearances. Citizens therefore increasingly felt the need to demonstrate that ‘the dictatorship is over’, and that in democracies people should be allowed to openly raise their concerns. This led to a broadening of popular support for the protests, which grew to include larger numbers of less radical citizens.

In sum, while certainly demonstrating that the situation was taken seriously, one might question whether President Piñera’s reaction attained its desired effect. In fact, it can well be considered a factor contributing to the growth of the protest movement, or even an escalation of the crisis. This is especially the case because he appears not to have given sufficient attention to the aforementioned societal limitations, especially in his phrasing of the situation as “war”, as well as the decision to deploy thousands of armed forces in the streets. The subsequent excessive use of violence by the security forces only aggravated existing frustration and anger.

A contextual analysis of Piñera’s response

Could Piñera’s response then be deemed a serious error of judgement? Perhaps. Although his severe reaction did not help to improve the situation, its underlying reasoning could be understood through a number of contextual factors. First, Piñera’s extreme reaction is likely to have been influenced by contemporary regional developments, such as the popular protests in Ecuador and Venezuela that resulted in violence and a collapse of public order. Such a scenario was to be prevented, arguably at any cost.

Second, it would be highly exaggerated to say that the entire Chilean population disapproved of Piñera’s actions, as a recent survey found 45 percent of the population agreed with the deployment of the army. As such, the tough reaction is likely to have matched the expectations of Piñera’s (right-wing) constituency.

Finally, the President’s resort to the military clearly fits in with a regional trend in civil-military relations. Since the 2000s, there has been a rise in ‘militarized democracies’ in which government regimes rely heavily on the military in times of unrest. This trend is fueled by leaders on both the left and right. While Hugo Chavez called for military support to protect his ‘Bolivarian revolution’ against “reactionaries” in Venezuela, Colombian President Álvaro Uribe popularized reliance on the military to ensure “democratic security” against guerrilla insurgents and drug barons. This trend was followed in countries such as Cuba, Nicaragua and Brazil. Therefore, Piñera’s resort to the military could well be explained through a prevalent regional reflex, that might well be considered ‘praetorian,’ as per Samuel Huntington’s seminal The Soldier and the State.

A reflection on the future

While Piñera’s reaction could be explained in these terms, the President was soon to realize the impact of his earlier response. On 28 October he ended the state of emergency, lifted the curfew and announced reforms in social and healthcare policies. However, for many Chileans these actions were insufficient, and the protests have barely shrunk in size. Indeed, the unstable situation has led to a full-blown legitimacy crisis for the government, with Piñera’s approval rating dropping to a historically low twelve percent. In the meantime, the violence employed by the security forces has led organizations such as Amnesty International to express their concerns over the situation, especially considering that restrictive new laws were enacted as recently as 27 November. As long as the government continues its tough ‘law and order’ rhetoric and empowers the police and army to use excessive force, it is unlikely that popular anger will subside.

While resisting calls for his resignation, Piñera did make a major concession by announcing that a referendum on constitutional change would be held in April 2020. While some have hailed this as the end of the dictatorship, others remain skeptical, pointing out that parliamentary approval of two thirds is required for any constitutional article to change – and a significant part of the senate consists of former authoritarian elites resistant to reform. It is unclear where Chile’s path is leading, but it is apparent that the country still struggles with its divisive past.