LECTURE: THE PRIVATIZATION OF SECURITY: HIGHLIGHTING BOTH THE ACADEMIC AND THE CORPORATE PERSPECTIVE. 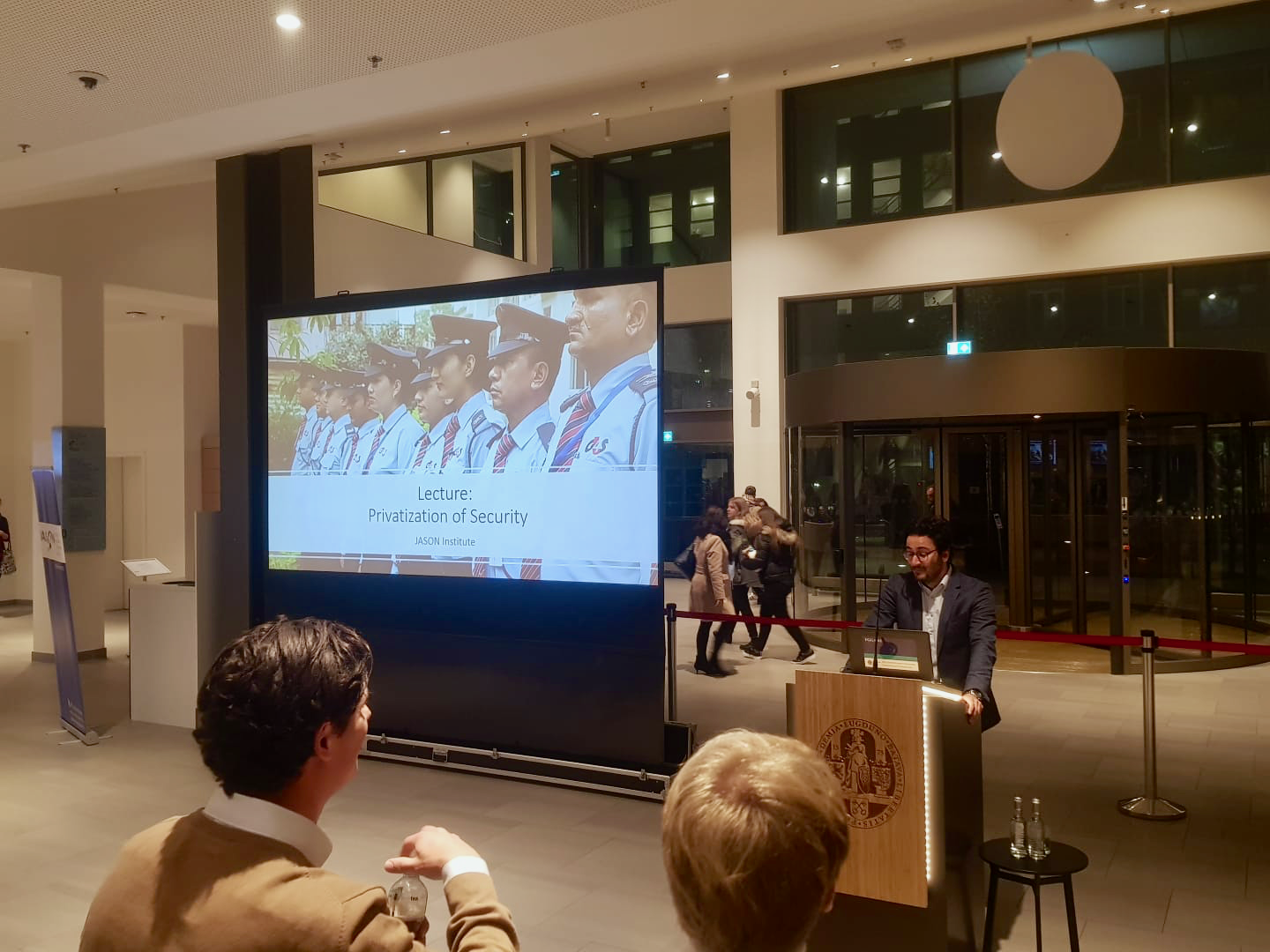 On the 27th of November, Laurens Sastrowijoto and Sjoerd Timmermans, both members of the activity committee of the JASON Institute, organized a lecture on the privatization of security. The lecture was given at the Spanish Steps in the Wijnhaven Building at the Faculty of Governance and Global Affairs.

The lecture consisted of two separate presentations by Eugenio Cusumano and René Hiemstra who provided the audience with their perspective on the private security industry. Eugenio Cusumano is an assistant professor in International Relations at Leiden University. His research is focused on the role of non-state actors in military operations and more specifically the increased use Private Military and Security Companies (PMSCs). Eugenio’s academic background, keen interest in the use of PMSCs together with excellent presentation skills made his lecture enjoyable to listen to. The next speaker of the night was René Hiemstra who is the Commercial Director of Group4Security or more commonly known as G4S. After listening to the academic perspective on the use of PMSCs in conflict zones by Eugenio, Hiemstra focused more on the raisons d’etre of human security in general and more specifically about the problem of accountability.

As the topic was discussed from an academic as well as a corporate perspective, the speakers shed light on both sides of private security debate. Eugenio Cusumano kicked off by providing the audience with an overview what PMSCs are, why they are used and what he identified as the legal, political and civil implications of using PMSCs.  Before discussing the implications, Eugenio highlighted that the private security and military industry provides a wide range of services. To be more specific, the lecturer stated that PMSCs vary from providing low-key logistical support to in-depth consultancy and intelligence-services. Finally, Eugenio highlights that only a small portion of the existing PMSCs provides military services.

One can therefore wonder why it is relevant to focus on the implications of the latter category PMSCs. This became clearer at the end of Eugenio’s lecture when he addressed the the financial, ideological and political imperatives for employing PMSCs. First, he argued that, when it comes to the financial imperative, there is no evidence that employing PMSCs is more cost efficient. Especially given that the market is dominated by a few companies, there is no competition that can drive the prices down. Secondly, Eugenio argued that the ideological imperative of employing PMSCs is mostly driven by neoliberalist sentiments. According to this theory, privatization is the key to good governance as it is presumed to be more cost efficient. Neoliberal politicians therefore argue that it should be applied in any sector, also when dealing with (inter)national security. Finally, Eugenio stressed the political imperative as the most dominant reason for the increased use of PMSCs. This has mostly to do with the limited willingness to deploy troops in times of conflict. By employing PMSCs, national troops can stay at home resulting in less “body bags”. Eugenio argues that by resorting to PMSCs, casualties of serving militants are averted while maintaining boots on the ground. In that sense, the existence of PMSCs bridges the gap between the political unwillingness to send troops to a conflict zone and the necessity for boots on the ground. In the end, Eugenio concludes that the previously discussed imperatives indicate that the need for PMSCs was constructed and that increasingly relying on PMSCs has implications on democratic control on the use of force.  At the end of his lecture, Eugenio noted that the criticism expressed in his lecture does not directly apply to G4S as this company does not deploy military personnel to fight in the battlefield.

After a quick break, the second and last speaker of the night, René Hiemstra is introduced. Mr. Hiemstra in his speech focusses mostly on why security is and should be provided by both public and private institutions. He moreover stresses that the stigma against PMSCs blurs people from forming a informed opinion towards the employment of PMSCs like G4S.

To begin with, Hiemstra argues that security really starts at the individual level. He does this by referring to Maslow’s Pyramid of Need. Hiemstra highlights that he personally perceives security in a very broad sense. Given that security is so important to live a worhty life, in the Western world we are able to call the police when one’s security is harmed. Hiemstra highlights that the luxury of having a government responsible for public security is not available everywhere in the world. The lack of public safety is seen in conflict zones where medical teams who are providing aid and education require protection from dangers. Another example is the protection of vessels that are crossing the Horn of Africa. By giving these examples, Hiemstra highlights that there are areas in the world where the government does not take responsibility for providing public safety. This turning point is, according to Hiemstra, where the private security industry comes in.

René however continues his lecture by focusing on the specific activities of G4S. He maintains that G4S is mostly active in the field where the public and private meet. To be more specific, in the Netherlands, G4S provides services at the police station that do not require police rights. He argues that nowadays, most of the work at the police stations is done by private contractors. The reasons for outsourcing these activities to private contractors according to Hiemstra is the decrease in costs and the increase in quality and efficiency. It is interesting to note that on this topic, Hiemstra and Eugenio differ significantly.

Hiemstra continues by touching upon the main counter argument given when it comes to outsourcing security, accountability. By comparing accountability of actual police officers with private contractors, Hiemstra states that the corporate nature of G4S allows for a more stringent form of accountability. To be more specific, Hiemstra argues that the concept of accountability is merely theoretical by questioning whether accountability even ever happens? He disconfirms this by highlighting that there every year, 200 police officers are fired based on criminal charges, while this is never discussed in the news. Hiemstra states that this in an indicator that public officials are not easily held accountable. At the same time, since G4S is a private institution, scandals will directly affect the stock price. Hiemstra stresses that the G4S’s reputation is everything and that they are therefore devoted to preventing misconduct among their contractors.

Finally Hiemstra highlights that the commercial existence of G4S depends on contracts. This means that if the employer is not satisfied with the services, the contract will not be renewed. In other words, by means of its corporate structure, G4S is strictly held accountable for any mistakes.

After taking questions from the audience, the lecture on the privatization of security has come to an end. I really enjoyed listening to two diverging stories on the increased use of private security companies and its consequences. It was interesting to be exposed to the divide between corporate and academic perceptions with respect to the privatization of security. When speaking on behalf of the activities committee of the JASON Institute, we would like to thank René Hiemstra & Eugenio Cusumano for their time and we would like to thank you for attending the lecture and for participating in an interesting Q&A session.