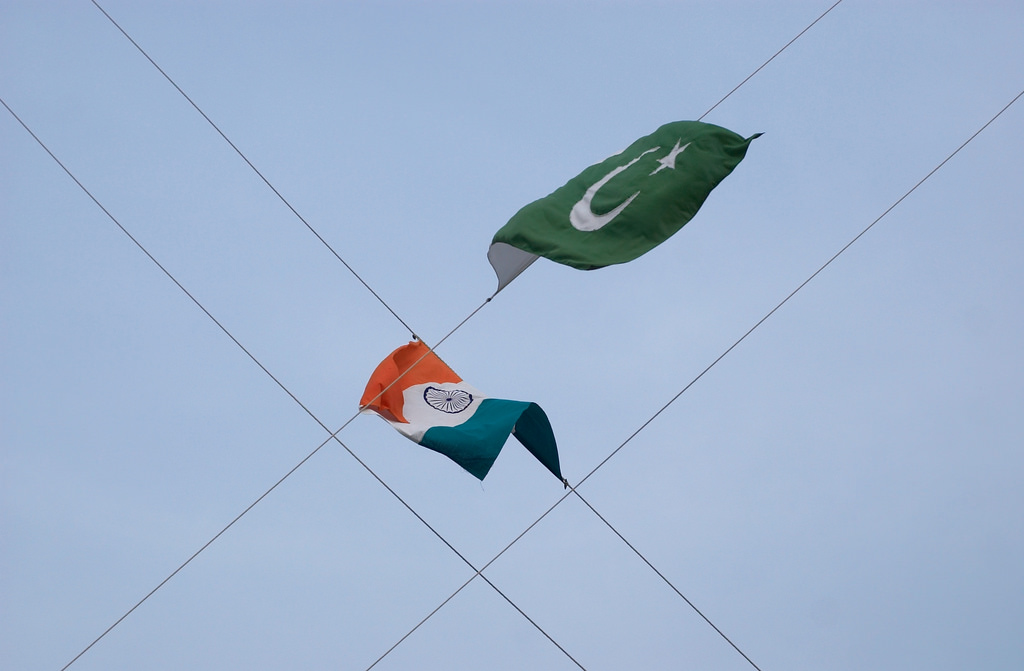 Currently the world’s gaze turns to North-Korea when addressing the threat of nuclear weapons, but this isn’t the only Asian state we should be watching carefully. The hostile relationship between Pakistan and India also brings with it nuclear danger. These two neighbouring countries have a long history of adversarial relations, derived particularly from the conflict over the Kashmir region. Since 1998 both countries have nuclear weapons, exacerbating an already precarious situation. As noted by Sameer Lalwani, an expert on the region: “It’s the only place in the world where you have two nuclear powers regularly, almost on a daily basis, shooting at each other”.[1]

The past few months, a lot of accusations were made back and forth by the two countries. Past September, India lashed out at Pakistan at the UN General Assembly accusing the country of harbouring terrorists.[2] Last month Pakistan’s Defence Minister in turn accused India of supporting anti-Pakistani terrorist groups in a proxy war. Additionally he confirmed that Islamabad prepared to use its nuclear weapons against India, to ensure its survival.[3]

In order to get a better understanding of the nuclear threat coming from hostile Pakistan-India relations, this article will first briefly address the issue of the region of Kashmir. This region plays an important role in the countries’ adversarial relationship. Subsequently, the danger of nuclear weapons in this adversarial relationship will be discussed.

The animosity between India and Pakistan dates back to the partition of British-India in 1947; It was then that a predominantly Hindu India and Muslim Pakistan were formed. The newly created states both claimed control over Kashmir, a Himalayan region that borders India, Pakistan and China. Kashmir was free to choose which country to join and initially remained independent, but it’s local readers eventually decided to join India. Pakistan however has always contested that, insisting that the region belongs to Pakistan because it has a Muslim majority population.[4] Major wars have been fought over Kashmir and militant and separatist groups of both countries have carried out violent attacks over the issue. After the September 2016 attack on an army base in Indian-administered Kashmir, in which armed militants killed 19 Indian soldiers, India declared that it would respond militarily if there was another terrorist attack launched with the support of Pakistan.[5][6]

In 1998, both Pakistan and India became nuclear powers. The presence of nuclear weapons in an already hostile and turbulent region brings with it a serious threat. Namely: a nuclear response by Pakistan to the use or, perceived use, of a strategic doctrine called ‘Cold start by India. Cold start was supposedly implemented by India after 2001, when it became apparent that India’s army was unable to rapidly mobilize. Under the post-2001 strategy of ‘Cold start’, India is able to swiftly undertake offensive operations, in response to a perceived Pakistani provocation. It allows India’s army to enter deep into Pakistan, giving the latter little time to respond. Pakistan believes that the most credible way to stop such an invasion is by the first use of tactical nuclear weapons. The country has been developing low-yield, short-range tactical nuclear weapons intended for targeting such a swift invasion. In order to be swiftly deployed, these tactical weapons have to be in battle ready mode, which could lower their threshold.

Since Pakistan’s weapons are in ready mode in order to prevent a cold start invasion by India, they can be swiftly mobilized. This brings with it the risk that they are used in a chaotic situation before it becomes clear whether there is an actual threat coming from India. Militant attacks or shootings along the unquiet border could lead to such a chaotic situation. [7][8]

The deterioration of bilateral relations, terrorism and attacks along the border heighten the risk of unintended escalation. There is the danger of India responding  militarily to a terrorist attack it perceives to be from Pakistan, with Pakistan in response deploying its nuclear weapons. This would subsequently trigger a nuclear response by India. Another possibility is that Pakistan, with its first use doctrine, uses its tactical nuclear weapons in response to a perceived invasion from India.

Due to the precarious situation caused mainly by the dispute over Kashmir, and the presence of nuclear weapons in both India and Pakistan it is important that international political actors actively encourage dialogue between the two Asian countries. The United States has recently been quietly spurring the rivalling countries to normalise ties, but a more active involvement from the UN could also help ease tensions.[9] The UN’s role in the Kashmir dispute has been quite limited in recent decades, whilst it’s possibly more suited to play the role of quiet neutral mediator than the United States.[10]

[7] Senate Select Committee on intelligence. (11 May, 2017). Worldwide threat assessment of the US intelligence community. Retrieved fromhttps://www.intelligence.senate.gov/sites/default/files/documents/os-coats-051117.pdf