The Meek Shall Not Inherit the Earth: Comparing the Strategies of Syrian and Yemeni Rebels 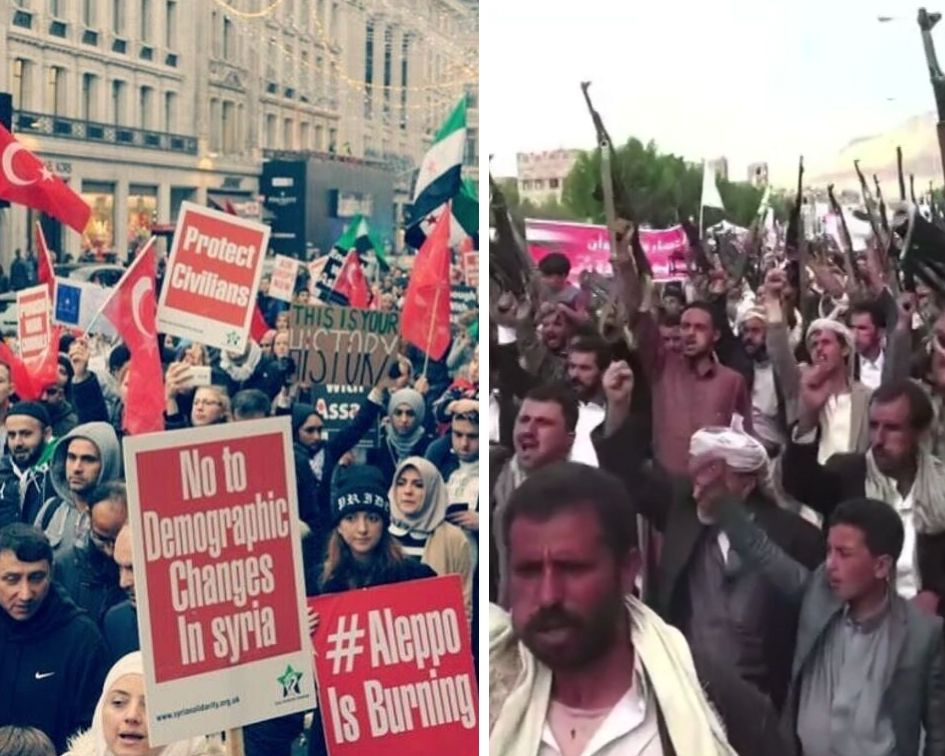 When vast swathes of Syria rose up in rebellion in 2011, many commentators predicted that Assad’s regime would fall. Eight years later, not only is the grueling civil war winding down, but Assad looks set to win it.

Much less attention was paid to Yemen’s civil war, even after the capture of its capital by the Shia Houthi insurgents in 2015, ousting the Saudi-backed Hadi government. But Yemen’s northern neighbors, Saudi Arabia and the UAE, were confident enough in their overwhelming military might that they named their subsequent anti-Houthi air campaign ‘Operation Decisive Storm’. Four years later, despite a devastating ongoing bombardment and blockade, the Houthis remain firmly in power in Sana’a, while the coalition has stalled and fractured into bitter infighting.

How has Syria’s opposition movement, having held so much promise and international support, withered to the point where its adherents are scattered or confined to the Turkish/Islamist-dominated provinces of Idlib and Afrin? How has the Houthi movement, internationally isolated and impoverished, managed to not only cling to its gains, but also to fight far better funded and armed enemies to an embarrassing stalemate?

Some have been quick to blame Iranian military and financial support, though this has been limited compared to the lavish funds and arsenals of the Saudi coalition, and even the foreign military aid provided to Syria’s rebels. A far more decisive factor in the relative success and failure of these movements appears to lie in their different application of resources, particularly modern technology, to even the balance of asymmetric warfare. The fact that one strategy has worked and the other has not should tell us a lot about the potential future of insurgencies in the 21st century.

With its background in the popular Arab Spring uprisings, it was perhaps unsurprising that the Syrian rebellion should elevate social media activism to attract humanitarian assistance. Many of those who initially protested against the regime were activists without military training. Moreover, the protestors could point to the example of Libya, where a weak, leaderless opposition had succeeded in securing a NATO air campaign on its behalf, bringing down the dictatorship by publicizing its endangerment. Consequently, even as the peaceful movement dissipated and full-blown civil war raged, the prevailing narrative trumpeted by Syrian opposition activists was that of defenseless, innocent and apolitical civilians being targeted by the regime’s army. The aim of this strategy was to galvanize Western publics into supporting a military intervention similar to that in Libya, with the establishment of no-fly-zones to blunt the regime’s air superiority, and even a bombing campaign against regime forces.

The emphasis of weakness and virtuous, apolitical pacifism as a source of legitimacy remains a prominent feature of opposition propaganda. Foreign journalists reporting from Aleppo in 2016 noted that the tightly controlled media atmosphere of the rebel-held territory was solely focused on ‘local activists’ who aimed their stories of civilian suffering and vulnerability towards a Western audience. Rebel fighters – despite their prominence in resisting the regime’s forced entrance into the city – were nowhere to be seen, nor was any mention made of their ideological commitments or affiliations.

Indeed, the most iconic figure to emerge from the siege was not an armed resistance leader, but seven-year-old Bana al-Abed, whose Twitter account accrued thousands of followers, including prominent Western media figures. Bana epitomized the narrative of innocence in the face of oppression, even as her platform was used to lobby for further military intervention in Syria.

In contrast, Yemen’s Houthi movement seized the nation’s capital after years of insurgency. The Houthis have shown little interest or faith of courting international support for their cause, mainly due to firm ideological opposition to Western powers. Given that their Gulf state enemies are closely aligned with Washington, appealing to American humanitarian sensibilities would likely be a forlorn venture anyway.

Houthi strategy has therefore been to apply modern technology to traditional guerrilla principles. While their Saudi and UAE enemies have deployed mercenaries and expensive advanced weaponry, the Houthis have replied by fostering grassroots support in their area of control, and applying cheap, accessible technology, namely drones, in a way that neutralizes their opponents’ advantages. Though massively outgunned, Houthi forces know how to hit their enemies where it hurts, targeting Saudi oil, water and travel facilities deep inside Saudi Arabia. In a propaganda coup this August, Houthis even struck a UAE-backed military parade in Aden.

The implications are simple and clear: no amount of money and muscle thrown at them by the Gulf States will dislodge the Houthis. The UAE appears to have taken the hint, withdrawing its direct forces from the country, and US backing for the Saudi campaign is becoming increasingly untenable as the prospect of decisive victory slips away. The Houthis have won greater Iranian support with their proven effectiveness, even opening an embassy in Tehran.

Who does tomorrow belong to?

The lessons of Syria and Yemen’s insurgencies will be important ones. Even in a world with enormous wealth and power disparity, resource vulnerability and accessible technology remain Achilles’ heels for the Great Powers.

A relatively benighted and embattled regime like Syria’s can counteract the effects of social media campaigning by relying on its own propaganda, and the fact that the narrative of victimhood has done little to spur the international community into action. In contrast, a rich, well-connected state like Saudi Arabia has struggled when faced with a weaker force determined and imaginative enough to exploit its human and material resource weaknesses.

Yemen may well stand as testimony to Voltaire’s claim that victory belongs not to the big battalions, but the sharpshooters. Syria on the other hand, has exposed the weakness of humanitarian mobilization.