The Last Floating ship on the Ayungin Shoal, The Philippines 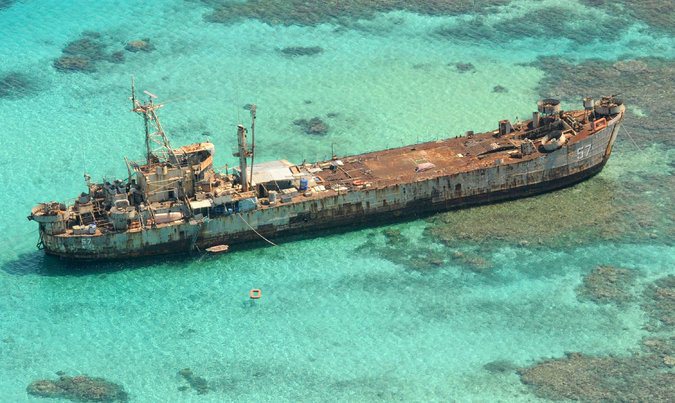 Invasion is not a new concept for the Filipinos: the archipelago is prone to invasion, and the Philippines hospitality does not help either. In fact, too much hospitality is one of the possible reasons why the Pre-historic Philippines was invaded in the first place.

Philippine history is part of the school curriculum, in which the grade schools are taught that the Philippines was a Spanish colony (1565-1898) for 333 years and that there was a brief British occupation (1762-1764) in Manila, the capital of the Philippines.  Later, The Philippines was a United States Commonwealth (1898-1946) for 48 years and during World War II, the country was occupied by the Japanese for 3 brutal years from 1942-1945.

Fast forward to the 21st century, where colonization and invasion are seemingly a thing of the past. Weak sea security is a good reason for a prosperous, industrialized country such as China to build artificial islands on other territories, while this act is nothing less than an invasion.

Filipino fishermen, who are dependent on fishing for food and income to provide for their family, cannot go fishing in the disputed areas in the West Philippines Sea. The reason is that the disputed sea borders are claimed to be Chinese territory or a part of South China Sea. In addition, China imposed an annual fishing ban which further solidified their claims on the territory.

Historically, minor sea conflict is nothing new for the Philippines. In 1610 in Playa Honda, modern-day Botolan, the United Provinces of the Netherlands and Spanish Philippines clashed during the Battle of Playa Honda as part of the Eighty Years’ War. However,  today’s sea conflict between the Philippines and China is not minor. It involves trespassing the sea border and disrespecting an international border and it is not a bold statement when one says, “China is building its artificial islands on the West Philippines Sea” because they are. Vietnamese, Filipino and Malaysian fishermen are deemed forbidden to go fishing in areas that were claimed by China. If they do, they will be chased by Chinese coastguards armed with advanced weaponry to intimidate the fishermen or anyone they deemed trespassers. Filipino fishermen were distraught by this intimidation.

On the other hand, China clings to the nine-dash line rule which stipulates a historic claim that the majority of the resources from the South China Sea belongs to mainland China, albeit under the United Nations Convention on the Law of the Sea (UNCLOS), China’s historic claim to disputed shoal has no lawful basis. Still, China refused to accept the arbitrator’s decision and continued building man-made islands within the Scarborough Shoal. It is clear that the artificial islands built by China will be used as military zones: the islands have anti-ship cruise missiles, anti-aircraft batteries and missile defense system jam packed with Chinese military troops.

Although a credible, international ruling body such as the Permanent Court of Arbitration has ruled in favour of the Philippines, China does not seem to fret.  They sent massive ships within the West-Philippine sea to guard their claims. The Philippines, on the other hand, are resilient and have BRP Sierra Madre (formerly the USS Hartnett County), a dilapidated, decommissioned ship.

When it comes to guarding its territory, the Philippines is lagging. Because the country’s security budget isn’t huge, the Philippines is too dependent on outside forces, such as the Mutual Defense Treaty in 1951 between the US and the Philippines to defend its territory. Nonetheless, BRP Sierra Madre has seen better days. It is no longer functional in terms of combatting invaders and transporting weaponry, the only function it has now is serving as a naval outpost for the Philippine Navy on the Ayungin Shoal.

On March 7, 2021, China sent about 220 Chinese vessels within the Philippines EEZ, it is believed that these Chinese vessels have militias on board. Meanwhile, a local Filipino reporter was assigned to be on the scene to gather information about the situation, en route to the disputed territory, the reporter’s team was chased by a Chinese navy, and this act is a form of one of the intimidations used by China to induce fear.

The Philippine government has been saying that Ayungin Shoal is part of the Philippines, but they seem to be tight-lipped about how the fishermen were being treated in their territory.

Engaging in war is probably not aspired by any country, it is costly and  people have learned from the past that war brings nothing but chaos. China might be intimidating other countries such as Vietnam, the Philippines, Malaysia, and Brunei through sea disputes, but starting a war will make their investments on the islands go to waste. Nevertheless, China seems to stop at nothing. Likely, the sea territorial dispute will not end anytime soon. The islands built by China keep on adding up and for China to achieve their end goal, it would be best to resolve conflicts and engage in a dialogue so each respective country involved in the sea dispute will have a common ground.

As for the Philippines, they are right in filing a case against China at the International Court. Their sea territories are at risk, and winning the case they filed against China created clout. As a result, people become aware of the situation. Moreover, The Philippines need to allot more budget to their defense. According to SIPRI (Stockholm International Peace Research Institute) Military Expenditure Database, in the year 2020 1.0% of its GDP or about 3733 in US$ m was invested.

The Philippines need to step up their defense strategy, modernize their military equipment, deploy navy ships on their coastal borders, guard the fishermen’s fishing ground and  as the last Floating Ship, the BRP Sierra Madre may take her final rest.