THE JULY APOSTASY OF 1965 IN GREECE; A ROYAL COUP LEADING TO THE REGIME OF THE COLONELS 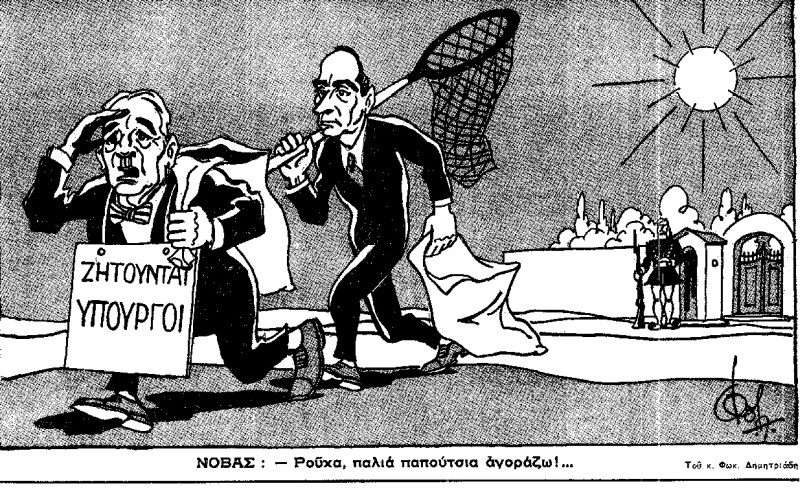 The Greek State has repeatedly been faced with political crises in the majority of its modern history. During the 1960s, Greece was shaken by political clashes and violent social confrontations; incidents that were sealed with the military coup d’état in 1967. The institutional diversions, however, started much earlier and were concerned with electoral notes, murders of political actors and Royal arbitraries. At the same time, the economy was rising and the Greek society was affected by international current events such as youth uprisings and the music culture.

In national politics, the Center Union party won the general election in February 1964, collecting 53% of the total votes and 171 seats in the Parliament. Mr. George Papandreou, on the aftermath of the electoral results, created a one-party government. However, in July 1965, while the internal economy had been steadily rising and the unemployment declining, Prime Minister Papandreou and King Constantine were involved in a personal disagreement regarding the placement of the government’s Ministers, that would change the modern political history of the country, leading to a period of political abnormality.

King Constantine’s persistence to elect favorable Ministers in critical posts such as the Ministry of National Defense brought him in an open confrontation with the Prime Minister Papandreou, resulting in Mr. Papandreou’s resignation on July 15, 1965. Following the resignation, 39 MP’s resigned from the Center Union party to join the Royal plans for ruling the State. Their action gave them the characterization of renegades (“Apostates”). The day after Mr. Papandreou’s resignation, King Constantine formed a new government including three renegades; Mr. George Athanasiadis who was positioned as the new Prime Minister, Mr. Stavros Kostopoulos who was posted as the new Minister of National Defense and Mr. Ioannis Toybas who was placed as the Minister of Public Order.

The aftermath of the Apostasy

The public’s reaction to the political events was direct; thousands of citizens all over the country went on protests, collectively shouting against the King and his actions. The tension of the protests was such that they resulted in heavy clashes between the public and police forces, leading to the death of a 25 year-old student, Sotiris Petroulas, who became a symbol for the fight against the King.

In the middle of the political crisis that had been unfolded following the Apostasy, some right-wing nationalist fractions of the Greek military forces organized a military coup d’état on April 21, 1967. The coup established a military dictatorship, known as the “Regime of the Colonels”. The dictatorship lasted for seven years and consisted of a series of far-right military juntas that ruled the Greek State with an iron fist. The official justification of the military regime was the fight against a hypothetical communist conspiracy that had infiltrated the State’s bureaucracy, academia, press and military to such an extent that military drastic action was needed to protect the country from communist takeover. During the period of the dictatorship, long-standing political freedoms and civil liberties that had been taken for granted and enjoyed by the Greek people for decades were instantly suppressed. Surprisingly, the democratic elements of the Greek society were opposed to the junta from the start, inspiring international protests and leading to the collapse of the establishment both ideologically and politically on July 24, 1974.

The importance of the Apostasy for international politics

The apostasy of 1965 and the establishment of the military junta that followed offered the ground for comparative research with other areas in the world. For example with Syria, Afghanistan or Iraq, that suffer a power vacuum as a result of the long-standing Civil War and massive poverty. The rise, however, of class struggle in all countries, such as that of the Greeks against King Constantine, Iraqis and Syrians struggling for the re-establishment of democracy in their country or even the Venezuelan protests earlier this year repeatedly show the dynamic role that the citizens can play against such efforts of weakening democracy.