The influence of the indigenous 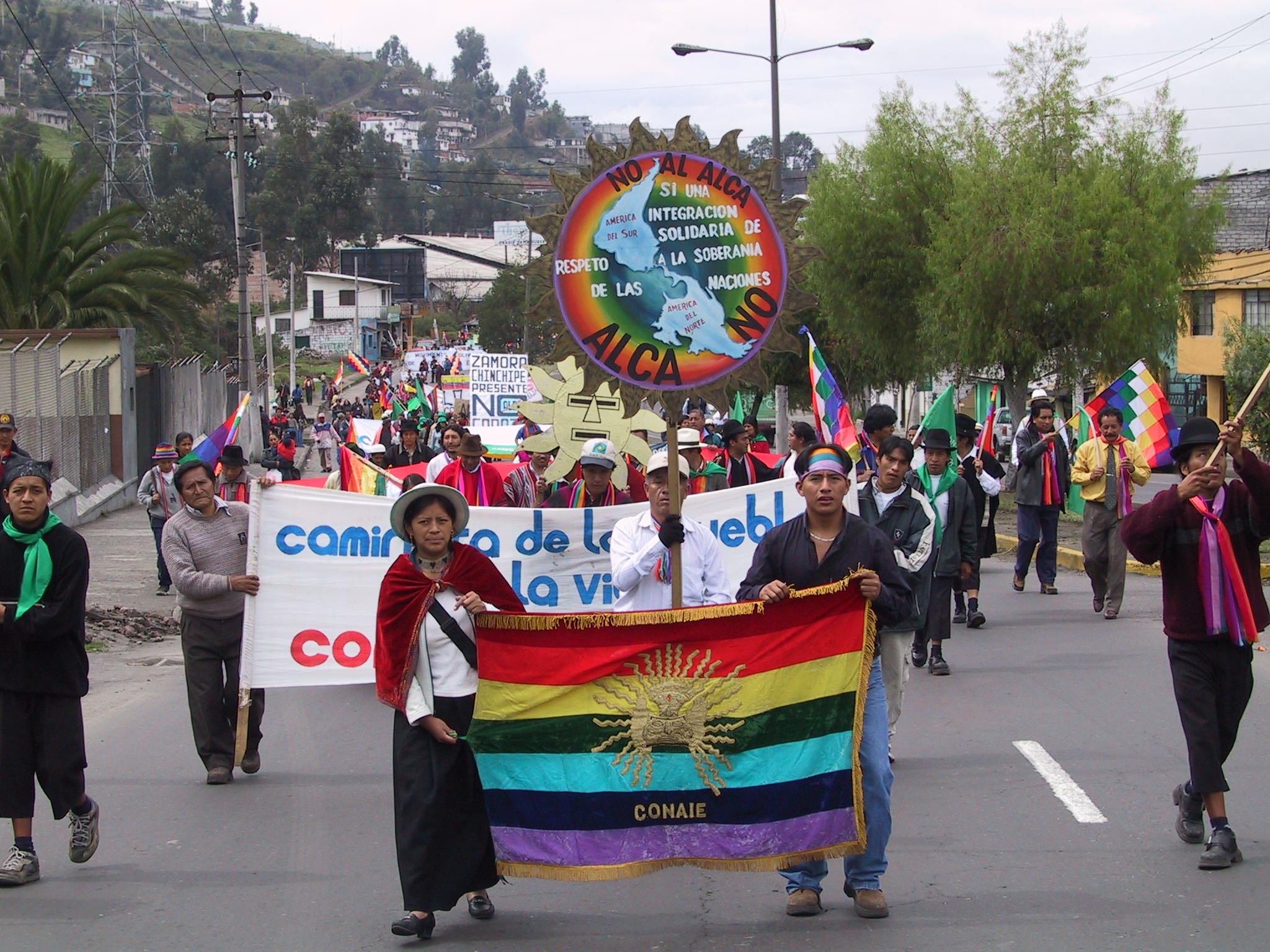 ‘Indigenous groups expected to play a key role in Ecuador’s protests.’ ‘‘Join our fight:’ Indigenous people in Brazil speak out against Amazon rainforest fires.’ ‘Indigenous peoples go to court to save the Amazon from oil company greed.’ These are just some of the headlines from the past few months that all seem to suggest the same thing: indigenous people are increasingly seen as powerful political actors. Is this part of a larger trend? Are indigenous groups actually gaining power in Latin America and what do globalization and environmentalism have to do with this?

From colonialism to the present day

When the Spanish colonists first arrived in the fifteenth century, approximately 52.3 million indigenous people were living in Latin America.[1] This number rapidly declined soon after the colonialists’ arrival, mainly as a consequence of the spread of European diseases and harsh working conditions in mines and plantations. Some communities fled to the Amazon rainforest, to remote sites in the Andean mountains or to the most Southern point of the continent. Today, the total estimated indigenous population in Latin America amounts to 45.3 million, ranging from 62.2% of the national population (Bolivia) to only 0.2% (El Salvador). In most countries, indigenous populations are still marginalized and widely discriminated against. Governments are often largely made up of people with a European or mestizo (mixed European and Indigenous American) background. Besides, most indigenous populations live in rural areas and are much more likely to be poor or extremely poor than the non-indigenous population. The main reasons for this are the lack of access to social services and the social exclusion and racism they often experience in the search for jobs.

When we look specifically at indigenous communities living in the Amazonian rainforest, we can observe that their position has further deteriorated due to globalization. Here, globalization meant the arrival of large Western companies which started exploiting the area for natural resources. Because of the expropriation of their land, indigenous communities suddenly became unable to provide for themselves and had to rely on the jobs available in a capitalist society. For many communities this meant further marginalization, as education is essential for climbing up the capitalist ladder of progress and education was only available in Spanish, a language many indigenous people did not master.

The positive influence of globalization

After the first few attempts (1960-1980) to scare away the ‘oil men’, in which a number of Western representatives of fossil fuel companies were speared, the communities sought to adapt to their new circumstances. In order to remain independent and preserve their culture, the communities engaged in two practices: attempting to gain control of the resources of their land that were being extracted, and ecotourism.[2] The latter, facilitated by the effects of globalization, gained particular attention of international NGOs. These were not only NGOs that advocated for indigenous rights, but also groups that promoted environmentalism. For many indigenous communities this alliance between indigenous rights and environmentalism appeared to be an excellent opportunity for more support. With new international backing, many communities regained some level of independence.

However, for a large group of indigenous people who called themselves los afectados (the affected ones), these moves towards independence could not prevent them becoming stuck in a cycle of dependence that was far removed from their traditional way of life. Their voices were not heard and their predicament was not recognized; they still lacked power and representation in their own governments.

Fight them with their own means

In the 1990s, some educated indigenous people realized that they could fight the oil companies through their own Western system: by filing lawsuits. The lawsuits against Chevron/Texaco filed by Ecuadorian and Peruvian indigenous communities in a US court are an example of this. Even though these were not always successful in legal terms, it can be argued that they successfully changed perceptions of indigenous people. Instead of being seen as victims, the communities were now increasingly seen as forceful actors to be taken into account while making decisions. This was the result of a long-existing dilemma between two contrasting desires among indigenous communities: the desire to preserve their own culture, separate from the rest of the world, and the desire to acquire political influence and representation so they could fight for their own rights.

An important shift can be identified here. While the communities have succeeded in preserving most of their culture, they now feel comfortable to reach out to international actors, to communicate their appeals in Spanish and to demand political attention for their cases. A change is also apparent among governments, with indigenous people increasingly being recognized as autonomous actors who should be listened to. A recent example of this is the Ecuadorian President’s promise to start negotiations with protesting indigenous groups about improvements in their livelihoods.

CONAIE, the national indigenous federation of Ecuador, has become an influential actor in the country, striving for greater rights for the indigenous population. One of its main goals is the declaration of Ecuador as a pluri-national state, in which multiple groups have the same rights as part of a participative democracy with a decentralization of power. Best known for their large scale popular uprisings, CONAIE and affiliated groups have already caused three former presidents to step down. What makes them so powerful?

According to anthropologist Gabriele Eljuri, their strength lies in their capacity for mobilization and the culture of resistance that the indigenous people have developed from the era of colonization. Because of their strong sense of community, they can form strong protest movements numbering thousands of people. What characterizes the latest protests is coordination with other societal groups such as students, senior citizens, farmers and craftsmen, something which also demonstrates their further integration into broader society.

From this it can be concluded that globalization has had both positive and negative consequences for indigenous communities in Latin America. In this article I have mentioned a few of these, such as the exploitation of land by foreign fossil fuel companies, the development of ecotourism and support for indigenous communities from international NGOs. The increased willingness among indigenous communities to speak out and demand attention from their governments seems to have altered their reputation and position the most. This is demonstrated not only by the protests in Ecuador, but also by indigenous communities in Brazil demanding greater attention be paid to forest fires in the Amazon. However, there is still much to be done to improve the living conditions of indigenous people, as well as to make sure their voices are heard and their needs are respected.