The Future is Papua: What we can learn from West Papua’s suffering and its solutions 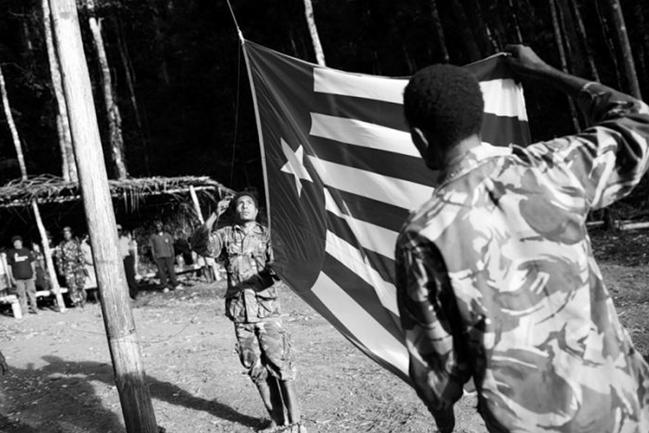 If you are a popular liberation movement looking to gain international attention, 2019 generally will have been a good year for you. Were you hoping to translate this attention into tangible political gains however, you might well have been disappointed.

The short-attention span of mass media has allowed almost every uprising, protest movement and political upheaval to have its place in (or near) the headlines. But the extent and length of coverage has largely depended on the media savvies of movement activists, and how much of a threat they pose to global capital’s status quo.

The trajectory of the Indonesian province of West Papua’s recent popular uprising has been demonstrative of this trend. A long-simmering struggle against oppression and inequality exploded into global consciousness in August, only to be largely lost from view by December, despite the committed struggle of Papuan residents and ongoing repression from Indonesia’s central government. Dozens have been killed and hundreds arrested in demonstrations that originated after soldiers of the majority Javanese Indonesian army racially abused Papuan students. As early as January this year an independence referendum garnered 1.8 million signatures in West Papua, but it was this viral footage that sparked mass protest and caught international attention [1].

As a leading post-colonial power with a steadily growing population, Indonesia can be considered demonstrative of a world in which the line between developing/developed nations becomes decreasingly definable. The relationships between Java, the nation’s dominant power-centre, and the minorities that populate the country’s sprawling and resource-rich islands stand as potential examples for a world that is becoming increasingly economically unequal, politically divided and culturally alienated. Papua could be seen as Exhibit A [2].

Indonesia’s very existence as a nation originated in little more than the common feature of Dutch colonial occupation. Though most of the country shared the struggle to eventually overthrow this rule in 1949, Papua, then known as Irian Jaya, did not. The Dutch held the territory separate, partially in recognition of it’s distinct cultural, racial and religious make-up, partially because it was rich in gold, copper and other resources that had replaced spice as the archipelago’s primary asset. Indonesia’s subsequent annexation of Papua in 1962 was couched in the language of anti-colonial liberation and national unity, even as native Papuans found themselves robbed of their own wealth.

It is a pattern we are increasingly experiencing on an international scale, from Northern Syria to Donbas to Kashmir, wherein nationalist fervor and ‘humanitarian’ concern form the justifications for actions that enrich elites and disenfranchise the majority. Having once been told to tolerate the loss of their independence in the name of ‘liberation’, Papuans are now advised by their current colonizers that their demands for equality are undermining the ‘unity’ of Indonesia [3].

The nature of Indonesia’s occupation has defined the nature of Papua’s resistance, and again offers a glimpse into how such struggles could look if global trends continue.

Indonesia may have had anti-colonial ideas when it annexed Papua in 1962. But by the time Jakarta’s rule was legitimized by a heavily controlled referendum in 1969, the new Suharto regime was firmly in the business of selling off natural resources to international corporations.  With huge metal and timber supplies, and an impoverished, isolated population whom the government and corporations viewed as inconvenient aliens, the island has seen its ecological and cultural heritage stripped bare over the years [4].

Unsurprisingly, the slow-burning Papuan guerrilla war against Indonesia has frequently manifested in direct attacks on mines, infrastructure and the workers who operate them. By attacking corporate property, the Papuans have shown their understanding of the nature of the regime oppressing them, but also perhaps the hopelessness of taking on the state’s military power head on. The Indonesian army meanwhile, the ostensible protector of the country’s citizens, is openly deployed in defense of foreign corporate interests against a people it clearly considers foreign, hostile, and, according to the language of its soldiers, barely human [5].

In this sense, Papua can again serve as a foreshadowing of greater tendencies, as peoples around the world rise up explicitly against the alliance of multinational corporations and military force. Whether it is the opposition to the Keystone oil pipeline in America, or the massive protests against cross-border corruption in the Middle East or South America, resistance to a military-capitalist complex is rising.

As resistance to this axis heats up however, so does the response, in the form of faux-populist chauvinism designed to distract the disaffected and divert their anger, as well as to generate support for an increasingly illegitimate ruling class.

In the case of Indonesia, the regime’s answer to the ever-widening contradiction between a kleptocratic elite and the rest of the population has been to promote racist, othering beliefs about the regime’s primary victims. Papuans are mocked and demonized for their racial characteristics, and for their Christian faith. The conflation of Islam with Indonesian identity has had the long-term effect of undermining a traditionally secular culture and exposing the whole country to the blights of sectarianism and radicalization. But as long as it helps alienate Indonesians from the minorities that their government wishes to oppress, it will continue. Around the world, other regimes are learning this lesson.

Hopelessly outnumbered and outgunned, it is hard to see how the people of West Papua can win equality, let alone autonomy, without major international support. But here another trend can be seen. The slow, grueling process by which Papuans are defending themselves is not enough to captivate international audiences, not when so many other crises are vying for attention. Jakarta knows well that restricting media access to the island and taking a slow, suffocating approach could be enough to strangle resistance without much foreign objection.

If the rest of us do not wish to see similar tactics employed closer to home in the future, it would be wise to not let them work for Indonesia now. The world must pay attention to Papua.

[4] Jo Chandler, 2019, Refugees on their own land: the West Papuans in limbo in Papua New Guinea, The Guardian, https://www.theguardian.com/world/2019/dec/01/refugees-on-their-own-land-the-west-papuans-in-limbo-in-papua-new-guinea