The First Climate War: Insight into the War in Darfur 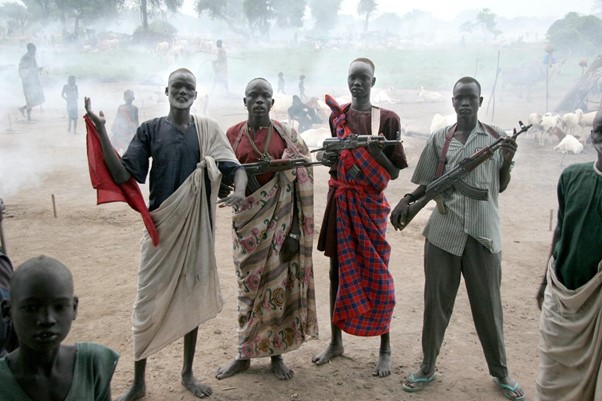 Darfur, a region in the Western part of Sudan, has been in a state of emergency since 2003. The region comprises several groups, with the Fur, Masalit and Zaghawa as the largest groups. These tribes share their region as dars. A dar is the Arab word for “homeland,” and within the Darfur region several tribes all possess their own dar. Traditionally it is a welcoming region, where indigenous groups and Arab migrants have coexisted for centuries. At the start of the 21st century, however, this peaceful coexistence came to an end. As a result of tensions between indigenous populations and the government of Sudan, the war in Darfur has developed over the years into one of the bloodiest conflicts in modern time, spanning nearly two decades since its start in 2003.[i]

The conflict originally comprised several groups, including the Fur and Zaghawa militant groups, who organised a revolt against the standing government. Between 2001-2002, the Darfur Liberation Front (DLF) was formed, consequently organizing several attacks and undermining central security. A related group, the Sudan Liberation Movement (SLM) denounced oppression of Sudan’s marginalized groups, calling for a secular state and self-determination for Darfur and exercised significant influence on the DLF.[ii] Consequently, the janjawid, an Arab guerrilla group, was created to combat ethnic-Africans. UN reports suggest that the janjawid is aided by the Government of Sudan in their discriminating attacks against the African tribes.[iii] Severe crimes against humanity have taken place, yet the UN  abstains from stating genocide as an end by the Government or its officials.[iv]

Now, the conflict in Darfur is seen in a different light. Specifically, the war in Darfur is increasingly understood in the light of climate change. The general notion is that the decline in rainfall and land degradation increased and intensified already existing violent struggles over pastures, water and farmland, proportionally resulting in a large scale civil war.[v]

Prior to the outbreak of the conflict in 2002-2003, a thirty-year period witnessed a significant and plausible connection between environmental change and patterns of violence.[vi]  The UN Secretary General states that “within the context of climate change, competition between communities and countries for scarce resources, especially water, is increasing, exacerbating old security dilemmas and creating new ones.”[vii] As a result, the strategic use of water scarcity as ground for rivalry and competition breeding is around the corner. Although at times contested, it is widely understood that resource scarcity is the prime mover of environmental conflict.[viii] An important remark to make is that scarcity is a relational concept, it only makes sense in relation to abundance. Specifically, in environmental conflicts, one group will have relatively more resources than the other, thus referring to a circumstance rather than a quantity.[ix]

Resource scarcity in the Darfur region has increased substantially in the past few decades. The conditions of drought and subsequent decrease of ‘wet years’ is the result of what experts consider to be one of the “largest regional climate changes experienced on earth during the last half-century.”[x] The 1950s witnessed many ‘wet years,’ yet these were followed by a relative increase in the amount of ‘dry years’ in the twenty years after. Post-1980s, only a modest rainfall recovery has been experienced, combined with a great deal of ‘dry years.’[xi] This has proven detrimental to the Darfurian economy.

Namely, the agricultural system is the  primary source of income for 65% of Sudan. Rainfed agriculture accounts for over 90% of total agricultural practices, with the other ten per cent depending on irrigation for growth. This part of the economy totals 47% of the total labour force, and even higher percentages occur in rural areas. In addition to the dependency on rain, farms are also operating below productivity potential. More so, public investments into these areas and practices is negligible which consequently diminished the position of the average Darfur farmer.[xii] Due to the high dependency of Sudanese and Darfur farmers on rain, farm productivity was respectively 68% (sorghum), 79% (groundnuts), 51% (sesame), and 42% (millet)  of the African average between 1998-2017.[xiii] These factors render the Darfurian economy into a weak position. Climate factors, however, are not only limited to precipitation. Even for rainfall, due to its inherent unpredictability, it has been discovered that it is increasingly less effective in irrigating crops.[xiv] The “increasing rainfall variability” will result in increased frequency of both floods and droughts. In effect, this signals a variety of factors. Specifically, a loss of productive land, water and pasture as a result of expanding desertification, a shortened growing season with higher chances at crop failures, higher likeliness of conflicts, and overall damages to agricultural land and infrastructures.[xv] In short, the “climate stressors,” among which temperature increase, rainfall variability, droughts and floods, will continue to be the biggest climate challenges for Darfurian farmers.[xvi]

A different challenge to face in Darfur is the territorial and ethnic spread of ethnic-Africans in comparison to ethnic-Arabs, signalling a change in relations. Previously relatively peacefully coexisting groups have become newly turned rivals, changing the dimension of the conflict. Due to the existing five different vegetation zones within Sudan, dry to wetter areas from North to South, farmers in zones one and two migrate to lower located areas with more precipitation. As a result, already tense situations surrounding land productivity and yield, are raised through increased presence of farmers with relatively fewer territories for each farmer.

Among scholars and experts there is a significant discussion on whether climate change is the main source of the conflict. Specifically, some experts admit that rainfall has decreased over a fifty year period, yet state that this is not necessarily the main instigator of the conflict.[xvii] The provided argument focuses on a short-term trigger as source of the conflict, thus refuting the claim that it is the first climate change war.[xviii] This claim, however, overlooks the fact that climate change is a long-term process. While the few years prior to the conflict experienced no significant deviation from the mean rainfall data, the post-1980s period experienced large periods of drought. More so, by focusing on a long-term change, it allows us to grasp the process in the lead-up to the conflict. As De Juan explained: “environmental change can lead to migration. (…) Migration can change demographic constellations and increase resource competition in areas of high in-migration. (…) Both factors taken together can increase the risk of violent interethnic resource conflict in subnational regions that experience long-term increases in the availability of water and vegetative resources compared to areas where the availability of these resources is decreasing.”[xix] In effect, this signals a trend in which different tribes adapted to ecological hardship, but reached a plateau from which they were unable to recover and consequently migrated to Southern Darfur. The quest for better livelihood opportunities pushed people from Northern and Eastern Darfur to Southern Darfur, creating the conflict that we witness to this day. This migratory movement pattern, in practice, translates to non-Arab and Arab groups putting the other at fault for over-extraction of resources, changing the division of land and aiming to establish a dominant ethnicity in the region.[xx] Migratory patterns southward as a result of the increasing impact of climate change on land cultivation and agricultural practices has thus created the first conflict with a very distinct variable related to climate change. It is for this reason many refer to the War in Darfur as the “first climate change war.” Yet, how is climate change becoming an increasing source of conflict in the future?

It is clear that in many instances the role of climate change is greater than initially supposed. The Greater Aural Region in Cambodia experienced social unrest as a result of the Paris Peace Accords from 1991, wherein it was decided that certain practices had to be changed. With a large rural population, managing the relationship between conflict, changing economic development and  climate change responses is complicated as many individuals are dependent on resources.[xxi] The main reason that climate change is evolving into a source of conflict is for its function in human security. When that security is at stake, society is highly likely to respond. Mainly due to the fact that the threat to human settlements, i.e. drought, floods, lost lives and dislocation e.g., have high potential for generating violent conflict. “The links between security, vulnerability and conflict are poorly understood,”[xxii] yet increasing evidence is coming to light that the role of climate in these conflicts is larger than previously understood. As in the case of Darfur, the significant climate changes have the potential for creating tensions and violent conflicts between groups within states. That link is not present as of late, yet has a high likelihood of being established in the foreseeable future. The main issue for vulnerable societies, groups and states is to strengthen environmental security to the best of their abilities, to ensure a relatively lower impact of the changes global warming will bring.[xxiii]

[iii] UN, “Report of the International Commission of Inquiry on Darfur to the United Nations Secretary General,” 3-4.

[xxii] Zografos, Goulden, and Kallis, “Sources of human insecurity in the face of hydro-climatic change,” 327-328.