STRUGGLE FOR POWER, GLORY TO UKRAINE 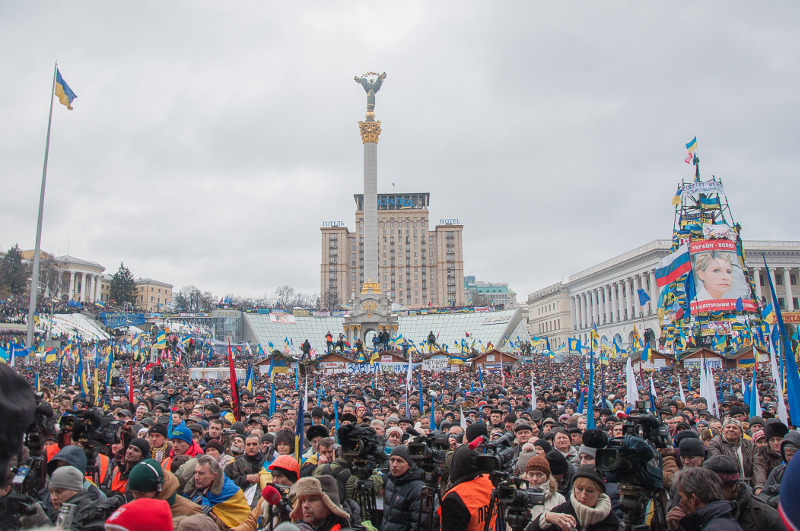 Ukrainians have always taken politics personally – their increasingly cynical political humour is a mark of a profound idealism. These days you can hardly hear people talk about anything else beside the ongoing protests; the amount of sophisticated political analysis surrounding you in the streets, cafes and public transport makes you wonder why none of Ukraine’s current leaders seem to be capable of the basic strategizing at least.

“I want to move towards the future, while you are dragging me into the past!” heatedly says a young man standing next to me in the metro. His opponent, an older woman, is cautious: “Don’t you realize you’ll be nothing but a slave in Europe?” An older man carrying a huge Ukrainian flag chimes in: “Well, you think we’ll be anything else in Russia?”

The Orange Maidan in 2004 was united around the charismatic figure of a pro-European Yushchenko, who proved to be so dreadfully inefficient that he ended as the least popular president in the history of independent Ukraine. The next elections firmly established the presidency of Yanukovich, Yushchenko’s despised rival from 2004. People have changed and matured since that year, yet again they find themselves at the same place, protesting against the same person – almost ten years after the first Maidan. And they’ve learned from their mistakes.

The Euromaidan is the most apolitical political event, and the most idealistic product of mass disillusionment. People are not united around a person this time; moreover, the attempts of certain opposition leaders to speak to the crowd were only allowed after they promised, “No politics”. No personal propaganda, no warming up the crowd for the 2015 presidential elections. So firmly was this sentiment expressed that all opposition leaders still seem to be somewhat lost at what to do further. While no joint action plan has been produced, each of them is trying to balance a delicate line between gaining popular recognition and not doing anything too drastic that could bring a serious blow to their political career.

Not that the current regime is very willing to work out a plan either, with or without the opposition (preferably without), seemingly hoping that everything will sort itself out, perhaps with the help of some force. While the opposition leaders seem genuinely confused (if not busy conducting separate negotiations with the President, as some rumours suggest), it is not clear at all what the motives of the ruling elite are. It is a mystery why the President took a U-turn after the years of pro-European rhetoric; why it is necessary to violently disperse peaceful protesters and to assault journalists, inviting both the world leaders’ and own people’s condemnation; and, finally, how the Customs Union with Russia fits with the future plans for the country and for the President himself. He’s got the 2015 elections in sight as well, after all.

One of the ways the protests have changed the capital of Ukraine is that people of Kyiv have learned to respond to “Slava Ukraíni!” (“Glory to Ukraine!”) with “Geroyam slava!” (“Glory to the heroes!”). This greeting with the obligatory response has been popular in the Western Ukraine since the times of Ukrainian Rebel Army, a nationalist organization fighting against the Soviet regime during the WWII. Despite the somewhat controversial history of the catchphrase and for the lack of many political mottos or leaders’ names to chant, it has become popular at Maidan. People draw a line, however, at the more sinister “Slava natsii! – Smert’ vorogam!” wishing death upon the enemies of the nation. This protest, while united around Ukraine and its future, is not seeing militant nationalism as a part of it. Pride in the country and nation is best combined with friendship with other nations, with Russia being one of them.


Speaking of nations, the Euromaidan has managed something that the EU itself has been having trouble with. The EU flags carried by the masses of people as a powerful uniting symbol is not something the EU can boast about daily. Neither are the numerous groups of people coming forward to show their solidarity and pride in being European – so far almost twenty European countries have gathered their small Euromaidans and the number of participating cities is growing steadily. Also, it is rare that the European identity is defined so clearly and is considered an essential and desired addition to the national one. All that has been initiated by the state that is not only a non-member of the EU, but has no illusions of becoming one soon. This will remain a part of the legacy of Euromaidan; hopefully, some democratic changes and recognition for human rights will stay, too.