Report: The Intelligence Behind Peace Missions: The UN Mission in Mali 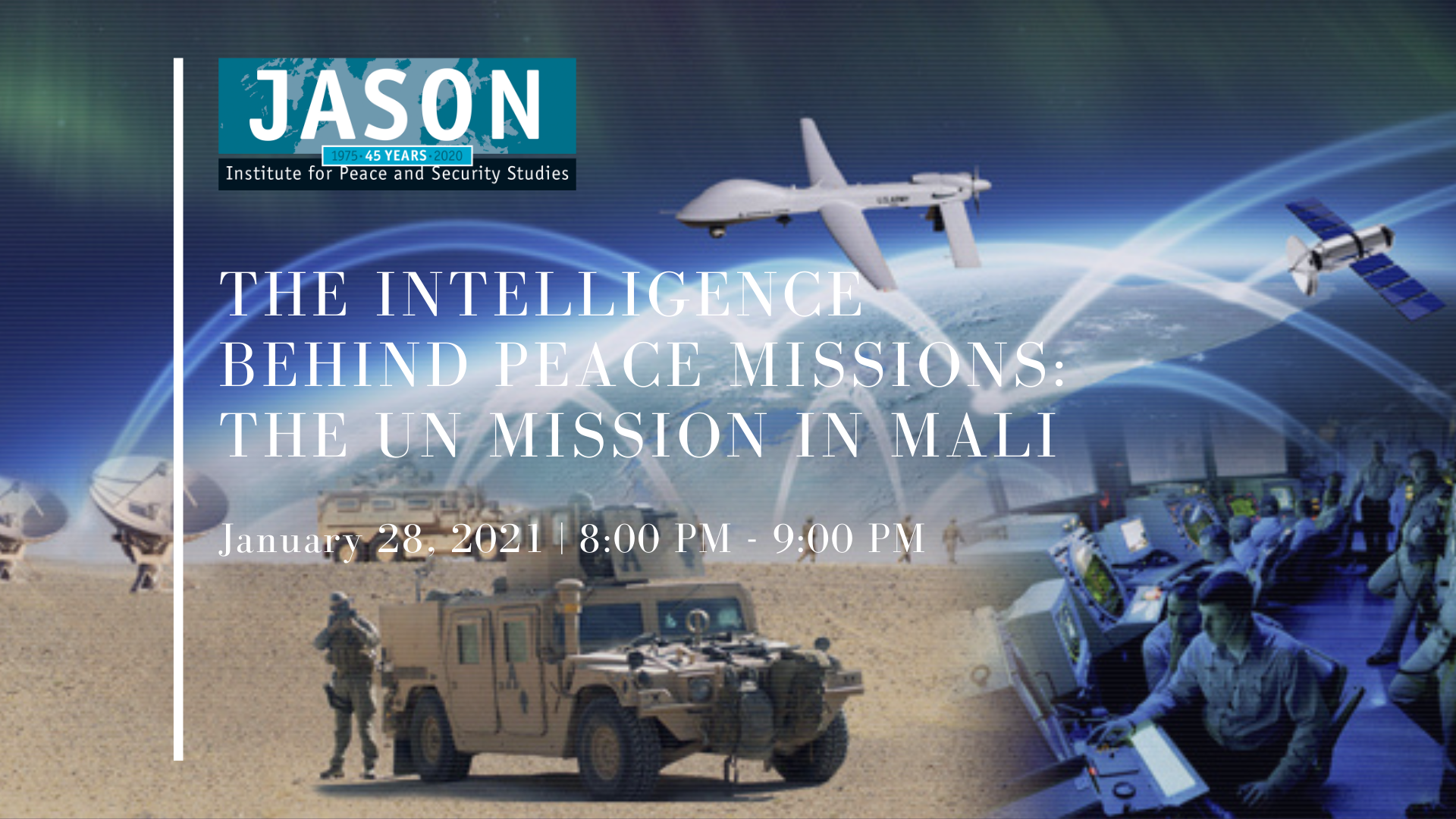 On the 28th of January, the JASON Institute for Peace and Security Studies kicked off the new year by hosting a webinar about UN intelligence in peacekeeping missions. We first discussed UN peacekeeping in general. The second part of the webinar was dedicated to intelligence gathering in the MINUSMA mission in Mali. For this webinar, Jason was fortunate to have welcomed two experts in the field who both agreed to share their experience and knowledge.

Major Ellen Regeling was able to provide us with a political overview of this complex topic since she works as a Peacekeeping-Intelligence Program Officer at the United Nations Headquarters in New York. Before her time in New York she has, inter alia, worked as a Senior Information Analyst at the Joint Mission Analysis Center (JMAC) in Bamako, Mali for the MINUSMA mission and was thus, able to shed light on our case study from a more civilian perspective.

Lieutenant-colonel Maarten Alderden was also stationed in Gao, Mali for the MINUSMA mission. As the Commander of the Intelligence, Surveillance & Reconnaissance Company (ISR-Coy) he led a multinational team of nearly 80 people. Mr. Alderden’s task included the gathering and processing of intelligence to support the military commander of the mission. Due to his experience, he provided us with boots on the ground insights from a military background.

Mrs. Regeling started by explaining the particularities of the UN as an international organization in relation to intelligence gathering compared to nation-states. Intelligence has long been a forbidden word in the UN habitat. Since intelligence is usually a prerogative of nation-states Mrs. Regeling described the challenges to get the member states on board. Mr. Alderden added that the actual intelligence collection and execution, however, was quite similar to “normal” missions since they have the same goals: to support the forces and the mission in general, limit threats and mitigate negative impacts.

Mr. Alderden used many metaphors to illustrate how he sees his job. For instance, he compared intelligence gathering to a weather forecast. One can base their decisions on its information but ultimately neither is 100% certain since the event lies in the future. Nevertheless, Mr. Alderden stressed the importance of intelligence since they allow one to make better decisions and avoid going blindly. Mrs. Regeling named some challenges the UN experiences like the safety risk for human sources and privacy issues.

We then moved on to the MINUSMA mission. This case study was chosen since it is the first peacekeeping mission with a significant sophisticated intelligence apparatus. Mrs. Regeling explained the motivation of establishing a peacekeeping mission in Mali in general after a coup and terrorist threats. Due to the high-threat environment demanding many casualties there was a great need for intelligence coinciding with the political willingness of NATO countries to contribute.

Both Mr. Alderden and Mrs. Regeling named many challenges that the UN personnel faced on the ground. For instance, the size of the country made it impossible to cover the entire territory with drone imagery and hence, only a small radius around the bases was covered. Moreover, a lack of funding means that many troops can only commit to self-sustainment. Mr. Alderden expressed the frustration in his team when the gathered intelligence was not acted upon due to a lack of resources.

Furthermore, the local population seemed to have developed a UN fatigue over time that Mr. Alderden personally experienced during his time. The People seemed less willing to talk to the UN anymore which influenced the quality of human sources. He was able to mitigate this fatigue through handing out goodies which created an immediate response. Mrs. Regeling noted that the civilian personnel was often unable to speak to the population directly due to the unsafe circumstances which created frustration on both sides as well.

Another organizational challenge were the differences between the skiing and non-skiing nations, so the Europeans and non-Europeans. Mr. Alderden explained that despite working for the same mission the differences in equipment for patrolling and in the training led to different numbers in casualties which in turn created tensions. Mrs. Regeling added the high expectations of Western technology that were not always fulfilled.

Despite all these challenges both agreed that the mission had a positive impact on the UN through creating internal procedures, guidelines and more training on intelligence.

At the end of the webinar, the attendees had the opportunity to ask question to both of our experts. However, due to time-constraints we were unable to go over all the questions, but Mr. Alderden and Mrs. Regeling proposed to stay longer and answer them in the chat which shows their dedication. We would like to thank both our experts and all attendees for their participation and contribution to this successful event!

You can rewatch the webinar here: