REPORT: The Crisis in Yemen, Conflict of Proxies 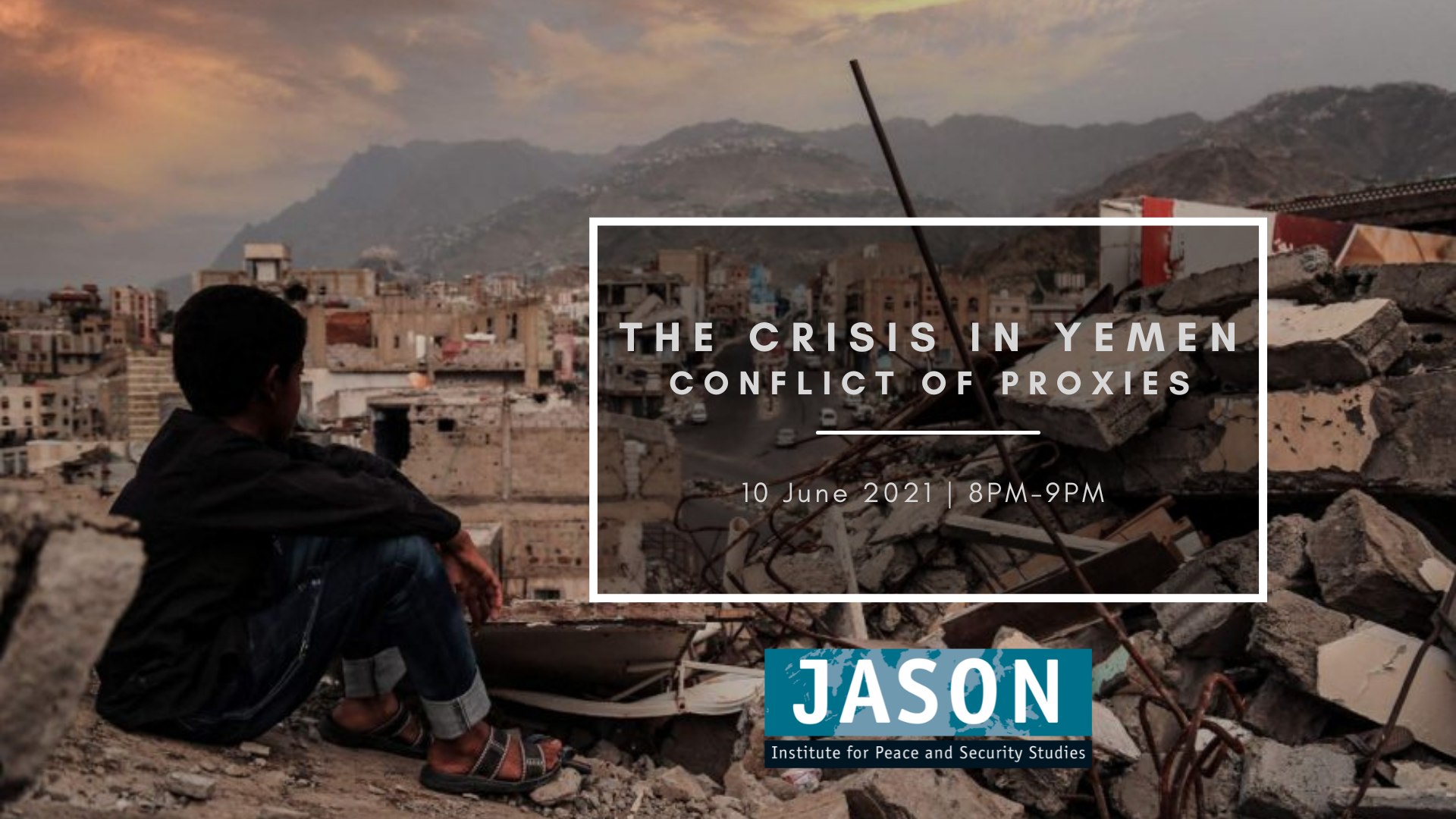 On June 10th, 2021, the Activity Committee of the JASON Institute for Peace and Security Studies organized a webinar about the Humanitarian Crisis in Yemen. Despite the fact that the crisis in Yemen barely receives any media attention, it cannot be denied that Yemen is a failed state representing the biggest humanitarian crisis in the contemporary world. We had the pleasure to invite three guest speakers on the matter to tell us all about their point of view.

We were delighted to welcome three specialist speakers who could share their views on the topic: Ms. Helen Lackner, Dr. Hiltermann and Mr. Peter Derrek Hof. Ms. Lackner is a British researcher, academic and author whose expertise lies in the area of historical, political and social developments of Yemen.  She is also the author of ‘Yemen in Crisis: Autocracy, Neo-Liberalism and the Disintegration of a State’. Our second speaker, Dr. Hiltermann is a lecturer in Politics in the Middle East at the Brussels School of International Studies and also the Program Director of Middle East and North Africa at Crisis Group Brussels. The third speaker, Mr. Hof, is the Ambassador of the Dutch Embassy in Yemen. After finishing his studies in International Relations and Political Science his career started at the Dutch Ministry of Foreign Affairs.

Three main topics are discussed in the webinar: the conflict and history of Yemen, the current humanitarian crisis and a perspective on the future. The webinar started with a dynamic conversation between the webinar’s host and the guest speakers. The speakers were asked for their reasoning behind joining this webinar. The overall answer was that the crisis in Yemen is not globally exposed enough and for solving the problem there needs to be more attention from the international community. Therefore, the only way this problem can be solved is by putting the problematics higher on the international agenda.

After a few general questions concerning the conflict, Ms. Lackner and Dr. Hiltermann were asked about the history of the population groups, their social differences and how this resulted in a humanitarian crisis. The two speakers gave clear answers on the questions. Firstly,  Ms. Lackner elaborated on the relationship between the Yemeni tribes and Saleh and the differences between the South and the North. After this Dr. Hiltermann answered questions about the Houthi group and their aims, how this group had a powerplay relationship with the Hadi and the consequences for other countries like Iran and the US.

Next on, the humanitarian crisis itself and the future of Yemen were discussed. Mr. Hof was asked about how the country and people coped during the COVID-19 pandemic and the role of foreign powers and of NGO’s. Over the course of the webinar, Dr. Hiltermann discussed the Stockholm agreement and the directions that the international community should bring in the current negotiations for ending the war, given the fact that the UN and the US still support the GCC Initiative. Furthermore, possible ways for resolving the war and crisis were discussed by all guest three speakers.

During the Q&A, there was one question about the oil tanker in front of Yemen and the possible consequences it might have for Yemen and the current crisis, which was answered by Mr. Hof.