Report: NATO’s New Strategy: The Strategic Concept as a Roadmap for the Next Ten Years 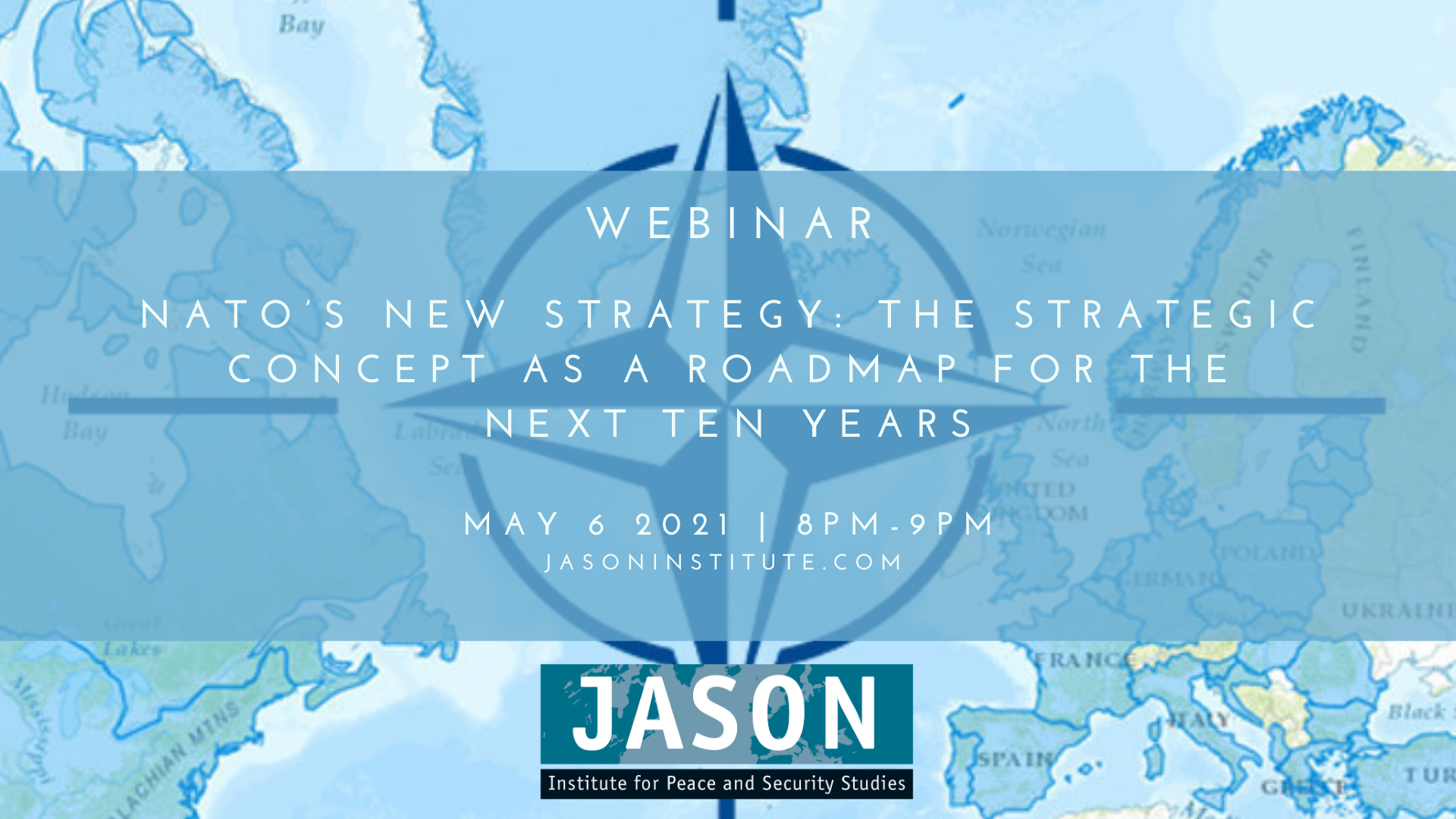 The Activity Committee of the JASON Institute for Peace and Security Studies organized a webinar about NATO’s new strategic concept on the 6th of May. We discussed NATO’s external security environment as this has dramatically changed over the last couple of years. Furthermore, we discussed the new security threats that have emerged to the Alliance such as the rise of China. The audience enthusiastically seized the opportunity to ask questions during the Q&A.

Colonel Mr. Niels Woudstra was our guest this evening and an expert on NATO as having formerly served as a Captain in the Dutch Navy for nearly forty years. He also taught as an assistant professor of operational analysis at the Faculty of Military Sciences of the Netherlands Defence Academy. Currently, he serves as Deputy Head Permanent Military Representation to NATO and the European Union. During the webinar Colonel Mr. Niels Woudstra was able to provide us with a clarifying overview and his insights.

Colonel Mr. Niels Woudstra took us along the recent history of NATO starting on 9 September 2001 after which Article 5 was invoked for the first time. He pointed out that this was a turning point as it was the first attack by a terrorist organization with almost a military like character on a NATO member state. Colonel Mr. Niels Woudstra then went on to talk about the developments in 2010 as the strategic concept called Active Engagement Modern Defence was created. Moreover, he emphasised that in this document Russia was still mentioned as a partner. Furthermore, NATO defined three core tasks for itself: collective defence, crisis management and cooperative security. Yet,the annexation of Crimea by Putin which occurred in the spring of 2014 meant the end of said partnership with Russia. These events showed NATO that it had to change from crisis management to collective defence. However, at NATO they realised they were not deemed fit anymore to fight or deter a peer competitor. In the fall of 2014 during the summit of Wales the member states took their defence pledge. The Netherlands promised to spend two percent of the GDP on defence. Unfortunately, the Dutch forces are in a deplorable state, because this percentage has not been met until this day.

However, NATO has adapted since 2014. Examples are the project of the NATO Command Structure Adaptation and the Enhanced Forward Presence. NATO also started the enablement of the area of responsibility of Supreme Allied Commander Europe (SACEUR). This is because military transportation from the west to east turned out to be difficult, because of bureaucratic or physical obstacles.

Moreover, new evolutions have been set in motion. During the summit of 2018 there is no mention of China. Now, China has been placed high on the agenda. The prospect of a more favourable US administration to international cooperation in 2020 allowed NATO to look into even further adaptation and renewal which can be found in the report NATO 2030 United for a New Era. Eight topics were selected by the headquarters mentioned in the report: reinforce our cohesion and solidarity; strengthening our resilience; preserving the technological edge; enforcing a large political commitment of the NATO members; ensuring the West stands firmly for the rules which base international order; helping partners with training and capacity building; focusing on climate change and finally to see the light to the new strategic concept.

On the 14th of June, President Biden will attend the NATO summit in Brussels during which Article 5, the pledge to solidarity and unity of the member states, will be discussed and reaffirmed. Furthermore, the new strategic concept will be given the green light. The weakness of NATO is the consensus decision making which means that it will take time to start the process, but therein lies its strength at the same time. An approved concept will be carried by thirty nations.

Colonel Mr. Niels Woudstra gave his assessment on the new plan and underlined China as a new hybrid threat, whereas Russia will continue to be a threat. Colonel Mr. Niels Woudstra underlines cyber in particular as increasingly threatening and space as a new NATO acknowledged domain. Ultimately, he argues, we have to change our minds about territorial defence. The rise of hybrid warfare, the new domain of space and cyber warfare mean that physical areas are no longer adequate. The concept of collective defence needs to be adjusted accordingly. This means we also have to rethink the meaning of Article 5. Furthermore, more attention must be paid to the Arctic being opened up for commercial traffic whilst undergoing the effects of climate change while the strategic importance is increasing. These are the main topics Colonel Mr. Niels Woudstra expects to be mentioned in the strategic plan of 2022. He ends by stating that these newly emerging focus points are the proof that NATO remains ever adaptive.