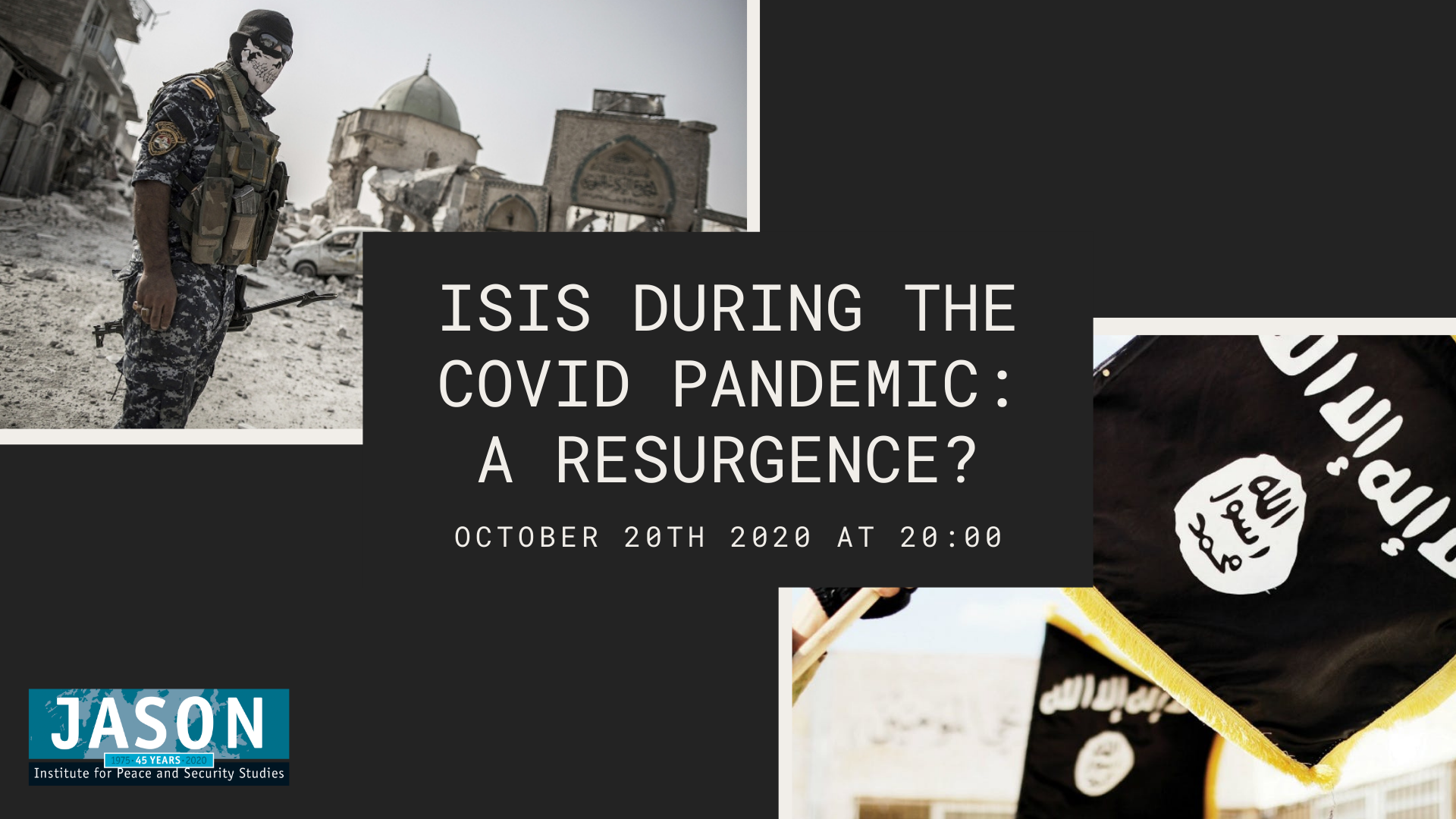 On the 20th of October, the JASON Institute organized its first event of the academic year. The topic of this webinar was the Islamic State. We spoke about the current state of IS, their operations, and the impact of the COVID-19 pandemic on the terrorist group. For this webinar, JASON was very glad to welcome two experts on terrorism, insurgency, and the Islamic State.

The first guest speaker was Pieter van Ostaeyen, a historian and Arabist who studied Medieval History at the KU Leuven. Ever since the outbreak of the conflict in Syria in 2011, Pieter van Ostaeyen began reporting on foreign fighters and extremist groups, including The Islamic State. He works as an independent researcher and has done work for organizations such as Bellingcat and the International Centre for Counterterrorism (ICCT). More recently, he has researched the operations of the Islamic State in Africa. The second speaker of the webinar was Dr. Colin Clarke, an adjunct senior political scientist at the RAND Corporation, where his research focuses on terrorism, insurgency, and criminal networks. Besides working at the RAND Corporation, he is an associate fellow at the ICCT and works as a lecturer at Carnegie Mellon University.

We started the evening by questioning the narrative that ISIS has been ‘defeated’, which could be heard as the Islamic State lost the final parts of their territory in Iraq and Syria earlier this year. Dr. Clarke noted that this is mostly a political statement and that most academic researchers would not say that IS has been ‘defeated’. He argued that IS is still very active, both in Syria and abroad, and that the group has enough financial resources to last at least another five to ten years. Mr. Van Ostaeyen agreed and highlighted the fact that IS is no longer a single organization, but rather a collection of semi-independent groups spread across the Middle East, Africa, and other locations. Although IS is not as big as it once was, both speakers agreed that its threat is not gone.

Still, the loss of territory has impacted IS in several ways. Dr. Clarke noted that IS has lost some of its appeals to potential new members, as “success is sexy, but a caliphate in tethers is not”. Thus, the recruitment of foreign fighters is nowhere near the level of the early 2010s. Moreover, Pieter van Ostaeyen mentioned that IS now has a harder time generating income from natural resources, as they no longer control the oil fields. However, this has not changed the way in which IS operates. IS sticks to their tactic of the ‘Management of Savagery’: destroying a place, making use of the chaos that ensues, and installing and enforcing their own way of working and living in those areas. IS is not likely to change these tactics, as they have proved to be very successful in the past.

On the impact of COVID-19 on IS, Pieter van Ostaeyen mentioned that the group initially claimed that the novel coronavirus was a punishment from Allah for the infidels and that members of IS would not be affected. However, this narrative soon disappeared. Mr. Van Ostaeyen claimed that the COVID-19 pandemic will not have a big impact on IS, since the states in which IS operates do not possess adequate means to tackle the pandemic. So, the pandemic goes on, and the Islamic State goes on. Dr. Clarke added that the border restrictions imposed by many countries could have an impact on the recruitment of foreign fighters, but that this recruitment was already on a low level before the pandemic.

At the end of the webinar, the audience had the opportunity to ask question to both of our experts. One attendee asked about the potential for future collaboration between the Islamic State and Al-Qaeda. Both Dr. Clarke and Mr. Van Ostaeyen stated that the possibility of cooperation between the two groups at the highest level is very unlikely. However, there might be some room for on-the-ground cooperation related to small-scale attacks. Other viewers were interested in the future: which branch of IS has the most potential to grow? And could the operations of IS in Mozambique and Tanzania spread to South-Africa? On this note, both Mr. Van Ostaeyen and Dr. Clarke warned us that a spillover to other countries and regions is likely, and that while the message that IS has been defeated might have been spread, the fight against the Islamic State is far from over.

You can watch the full webinar on our Vimeo, click here!