PLANKTON AND CLIMATE CHANGE – CAN PLANKTON SAVE OUR PLANET? 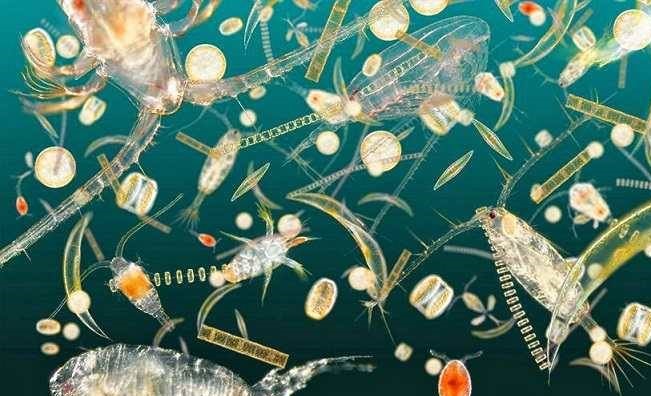 At first glance, you’ll probably think: how does this topic relate to peace and security studies? Well, to be honest, I think that topics surrounding man-made climate change should be on top of the bill for JASON magazine as the biggest threat to our planet is exactly that. Not the Islamic State with their attacks, not Kim Jong-un with his childlike behavior and not even Trump, who is as unpredictable and impulsive as the last gentlemen I’ve recalled. No: it is man-made climate change: we are causing a sixth mass extinction on this planet. Really. All by our selves.

Now that we have reached a point of mutual understanding about why this topic is a perfect fit for JASON magazine I will begin writing about plankton. About lots of them.

Only recently people started to look intensively at the major players in the oceans with regard to carbon absorption and marine life stability, which resulted in the recognition of the importance of having an abundance of plankton in our oceans. The next paragraph will explain why this is the case.

Plankton consists of two general categories: phytoplankton and zooplankton. Phytoplankton are unicellular and therefore extremely small, whereas zooplankton is big enough to be a suitably sized food for predators such as commercially important fish and great whales. Although they are both relatively small, plankton contributes in a major way to our world’s carbon reduction: they have the capability to ‘pump’ the carbon dioxide out of the atmosphere into deep sea. How? By feeding themselves with CO2 rich nutrients and excreting these at great depth, as these plankton can rapidly migrate vertically, by hundreds of metres per hour. In this sense, you can see plankton as a biological pump, absorbing the carbon dioxide out of our atmosphere into the layers of the deep sea. [2]

Not only do they have a major role to play when it comes to absorbing CO2 out of our atmosphere; plankton is also the very basis for the entire marine life ecosystem when we look at the food chain. Without plankton, this entire system will collapse. The last time the plankton ecosystem collapsed it took the Earth’s oceans 3 million years to recover, which shows us the far-reaching effects of changes in the plankton population. And unfortunately, major changes are happening within the plankton population.

As climate change accelerates, the world’s oceans are absorbing more and more carbon dioxide. This can be viewed as a greenhouse gas blessing, but in reality, this is not exactly the case. Around ten years ago, the Leibniz Institute of Marine Sciences in Kiel, Germany, discovered that Phytoplankton (the smallest species) are actually getting a boost from waters with a higher temperature (22.5 degrees) compared to water with a lower temperature (16.5 degrees). These phytoplankton are therefore increasing in numbers, resulting in them absorbing even more CO2 out of the atmosphere. But as a result, the acidity of ocean waters is increasing. This is due to more rapid transport of CO2 into the depths of the ocean which takes place as phytoplankton absorb more and more CO2. [3] Especially the zooplankton (the bigger plankton), with calcium carbonate skeletons, and the marine life in deep waters will be affected by the more rapid CO2 transportation into deeper waters, because they cannot manufacture calcium carbonate in acidic waters. [4,5,6] This is causing an environment in which the zooplankton, and the other marine life, cannot survive.

The following scenario’s will/ can happen to plankton and other marine life if this process continues:

1) They will suffocate due to the lack of oxygen in the oceans, which is a result of the rise in water temperature

2) They will heavily mutate in the acidic water, making it impossible to survive, resulting in …

3) The decline of zooplankton/ krill, which, in smaller populations, will not be sufficient to feed the rest of the marine ecosystem.

Building on these predictions, the overall impact of these scenarios should be obvious: the economy surrounding commercial fishery will completely collapse (an economy which is worth over 24 trillion dollars worldwide), the majority of life in our seas will be dead (in time this will also make sure that the plankton system will collapse), which will then result in the increase of CO2 levels in our atmosphere, which will finally also make sure that the majority of life on land will be lost as well. There are already scientists that have found evidence to support the thesis that if current amounts of CO2 will continue to be released into the atmosphere, by 2200 the oceans’ acidification will so bad that the complete collapse of the marine ecosystem will happen (Colt & Knapp, 2016). In order words: if we continue the path we are now walking, we will cause the sixth mass extinction on our planet, all by ourselves.

Solutions: all the way or no way

The solution to this challenge is extremely logical: the amount of CO2 emitted into the atmosphere should drastically decrease. If we humans can land on the moon, we should also be capable of living CO2 neutral. But this will only happen the moment we realise the importance of climate change in regard to the existence of the world as we know it today; our contribution to this major challenge and the different mindset we need to establish in order to fight this battle.

If we do nothing, our planet will continue to exist but it will probably look like Venus, with a temperature of 250 degrees, Stephen Hawking warns. Currently, we are close the the tipping point where global warming becomes irreversible. Therefore it is really the case that we have to go all the way, change our thinking and behavior, or go no way, which is the certain path to extinction. Therefore, start riding your bike (more often) and eat less meat. Build a company that produces edible cutlery (bakeys.com), or invent a machine that takes CO2 out of the air (climework.com). Clean up our oceans (theoceancleanup.com) and plant more trees (justdiggit.org). Just do everything in order to fight the biggest international security issue of all times, because all our lives depend on it.

P.S. Do take a look at all the great initiatives I’ve put in breaks in the last alinea and be inspired by the possibilities. We can do it, but our time is now. Not tomorrow. Now.