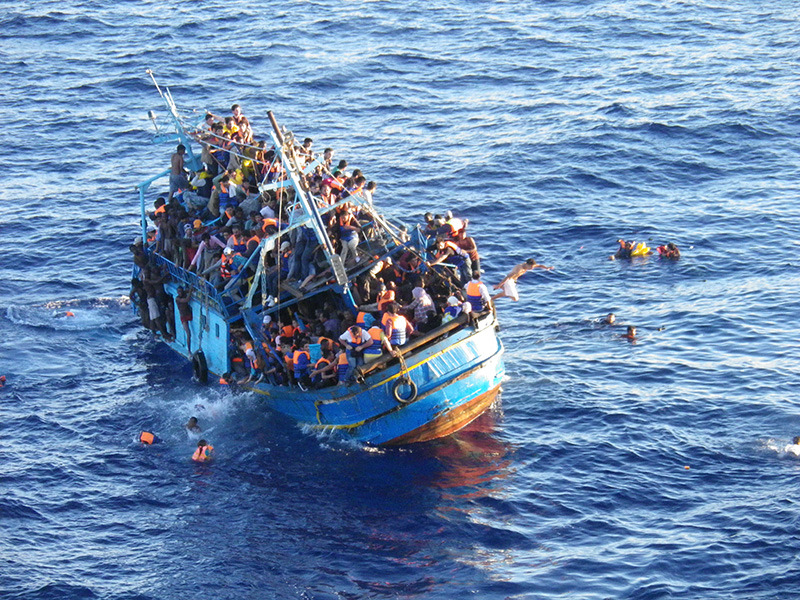 The Mafia, those masters of fear mongering are not a frequent item on the news outside of Italy but as this article will show the mafia does impact all of Europe and in ways you may not immediately expect. In the mafia Islamic State may have found an unlikely ally in their bid to use the refugees traversing the Mediterranean as a Trojan horse for their attack on Rome.

The fear must be all consuming for those ready to depart under the cover of darkness to set sail for Europe. But no matter how terrifying it must be for a mother to get on a tiny boat with her children and clearly too many others for the final stretch of a perilous journey, there is another even more potent fear that pushes them onward onto the sea. Fear of rape, murder, torture and unspeakable horrors; fear that there is absolutely no future where their homes once were. [1] Precisely that fear has in the past months driven countless people from their homes fleeing the brutalities of Islamic State in hope of a better life in Europe.

When against all odds these people manage to reach Europe they do so on an island that likewise has been long ruled by fear. For the past two centuries (exact dating is impossible due to the secrecy surrounding such affairs) the mafia has held Sicily in an ever-tighter stranglehold squeezing money out of the people in every possible manner. From the ruthless murder of those opposing them, the destruction of countless age old palaces, contamination of farmlands with toxic waste, rigging of elections to violently beating down labour uprisings the mafia has left no stone unturned in an effort to procure money and above all power. Not unlike IS the mafia’s main weapon is the fear they set into the heart of people by their monstrous brutality. [2]

Now that the coasts of Sicily have become the epicentre of the immigration to Europe the mafia has gotten its claws into this new business opportunity. One can see why, in the eleven months that military operation Mare Nostrum set out to rescue stranded irregular immigrants and bring them to safety well over a 100.000 people have been saved. [3] The lion’s share of these immigrants was subsequently brought to shore in Sicily. An astounding 90.000 have arrived in the port of Catania alone and since there are no facilities to house, process and keep safe such amounts of people ad hoc solutions had to be found. [4] Because of the economic crisis the hotels in Sicily have been struggling to fill their rooms so that many a hotel owner offered to transform their business into makeshift shelters for the stranded newcomers. [5] To compensate these businesses the Italian state vows a 30,- euro fee per day per immigrant to pay for everything from shelter, food and healthcare to psychological help. [6]

With thousands of immigrants in Sicily this adds up to a large amount of money, large enough to raise the interest of the mafia. Hotels have traditionally been favourite over-world investments (and money launderers) of Cosa Nostra and now with the constant flow of cash coming from Rome it has become interesting even outside of tourist seasons. Hotels-gone-refugee-camps work without any anti mafia certification and there has been constant concern that the mafia rather than the immigrants may be profiting from the money meant for their housing.

That the mafia is benefiting from tax money in itself is always frustrating but in this case it also means that the refugees go without the most basic care that they so urgently need. For a family that has fled a part of the world torn apart by war and that has undertaken a perilous journey spending months in fear of death, rape and all sorts of hardship psychological aid is no luxury but a bare necessity. With the mafia pocketing the funds for this care the families are robbed of this service. Children and young adults spend their formative years in an environment full of trauma and void of hope.

Without a doubt this is a humanitarian tragedy but it may very well be a security nightmare as well. As Islamic State has recently established a foothold in Libya right at the border of Europe and on Twitter threatened they would be coming for Rome using the torrent of illegal immigrants as a Trojan Horse, the people who took desperate measures to get away from IS risk in the end becoming a tool, a weapon of that very extremist agenda. [7]

Not only does the mafia make off with the money that the state pays but it also goes after the last penny the refugees may have by demanding extortionate rates for the most basic needs like transport. In these dire straits refugees try in any way conceivable to make some money to take care of themselves and their children be it with almost unpaid labour or with prostitution. [8] In any way they find themselves at the whim of the mafia. The situation these refugees now find themselves in is one of fear as it was before, but where once they had hope to find a better future in Europe they now have been deprived even of that hope, leaving nothing but despair.

These people, especially young adults when deprived of professional council are vulnerable to being taken advantage of by the psychological exploitation that is radicalism. Especially traumatised children and young adults who have to live in cramped conditions without council or anything to keep them occupied in a constructive manner are prone to fall victim to such escapism. IS does not need to fill boats with valued IS loyalists and send them to Europe. All they need is recruiters in Sicily who prey on the weak, hopeless, disillusioned and downtrodden there. With 32.000 desperate people staying in refugee camps and countless others out on the streets as we speak IS can hope to find some that will join their ranks, right behind enemy lines.

Whether you agree with the more extensive Italian mission Mare Nostrum or rather with the downscaled European version Triton in any case the money that is being spent by European taxpayers should be used to benefit the security of our Mediterranean borders as well as to minimise the humanitarian disaster unfolding on our doorstep and certainly not to enrich an organisation that is detriment to the security of Europe and responsible for the suffering of countless people among which the refugees. The mafia and IS have unwittingly formed a sort of unholy alliance, each helping the other in achieving its goals. IS creating a refugee storm that provides a viable business for the mob while the mafia in turn creates a fertile breeding ground for IS recruits in Europe.

In no way should this article give fuel for xenophobic rhetoric or imply the refugees in themselves are willing agents of IS. Neither should this be read as a call for a complete stop on immigration or search and rescue missions in the Mediterranean. Rather it should draw attention to the criminals on our side of the sea that are profiting from the misery of these people and with it threaten the security of all of Europe. This should be read as a call for action to all of Europe to not only deal with the crisis on the water but also to form a joint and comprehensive plan how to manage the situation once the refugees do reach our coasts so as not to rescue them from the grasp of the human traffickers just to hand them over to the next gang of ruthless criminals.

After public outcry following the drowning of 366 people of the coast of Lampedusa in 2013 the Italian state started Operation Mare Nostrum. Using up to a thousand military personnel from both Navy and Air Force to search the Mediterranean Sea for refugees in distress. [9] [10] The operation was hailed by humanitarian organisations for saving over 140.000 lives while others criticised it for having a suction effect on illegal immigration. Due to the high coast of the operation to Italy (9 million a day) there was constant request for a joint European mission. [11] From November 2014 the European Frontex operation named Triton replaced Mare Nostrum. Triton is a much smaller operation focussing solely on the Italian territorial waters and not actively searching for refugee boats on high sea. [12]

[4] Barker, Memphis. “What Happens to African Migrants Once They Land in Italy during the Summer?” The Independent. 23 Aug. 2014. Web. <http://www.independent.co.uk/news/world/africa/what-happens-to-african-migrants-once- they-land-in-italy-during-the-summer-9681473.html>.

The relatively few refugees that actually manage to reach Europe after their ordeals are far from in safe haven for the Sicilian mafia has in them found a new way of profiting from the misery of humanity. To add insult to injury the mafia may inadvertently be lending a helping hand to extremists like IS and thus threatening the security of Europe.