Over the Mirage and into the Mountain 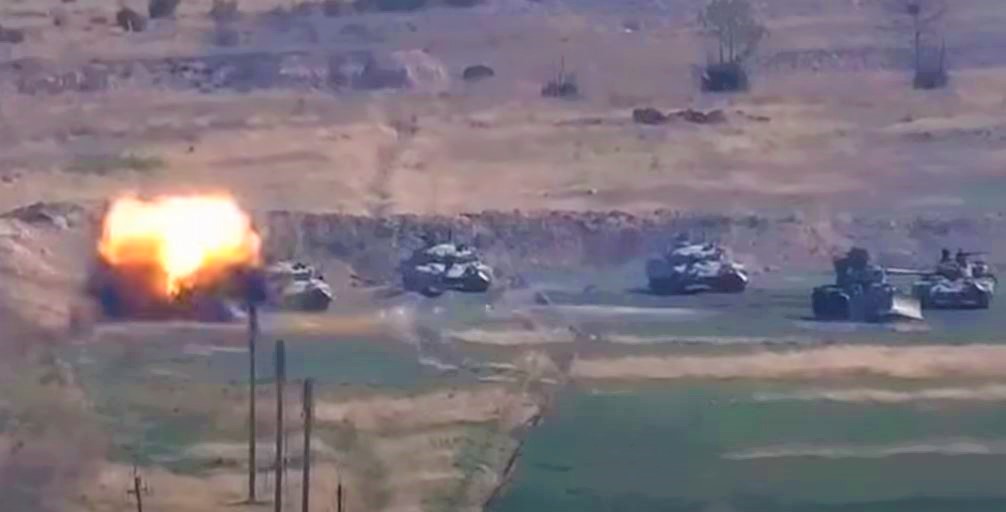 Over the Mirage and into the Mountain: Why Turkey’s drone victory in Libya need not presage another in  Nagorno-Karabakh

When the frozen conflict between Armenia and Azerbaijan over the disputed Nagorno-Karabakh region erupted once more this  September, it opened up a testing ground for the new dynamics of  World power. Having lost control of the territory in the 1990s war,  Azerbaijan is now banking on its oil wealth, military build-up and investment in regional alliances to tip the scales in its favour. With  America’s presence in the region waning, the war could prove an example of how conflicts unfold in a multi-polar world.

Most decisively so far, Turkey is using the fighting to test the viability of both its regional ambitions, and its growing output of military technology, much of which is now being utilized by the Azerbaijanis.  Following recent successes in asymmetric warfare abroad, Turkey is now pitting its strategy, specifically its dominance in drone technology, against a regular, entrenched military in a conventional interstate conflict.

So far the media narrative of the conflict, especially the one pushed by Turkey and Azerbaijan, has emphasized the key role of drones in  Azerbaijan’s offensive strategy, gathering intelligence, destroying enemy equipment and guiding assaults [1]. But as the conflict continues to drag on, and Azerbaijan’s forces face growing casualties for limited gains, the role of drones as a game-changer in conventional war seems in doubt. The answer to this might lie in the differences between the current conflict and the one in which Turkey first tested their new strategy: Libya.

For years now drones have been deployed with some success in the war against guerrilla forces such as ISIS or Al-Qaeda. Whether this strategy is effective in the long-term is debatable, and its ability to minimize civilian casualties is doubtful, but it has decreased the cost in money and manpower to its executors, and has thus become a  growing investment for countries like Turkey which seek to have greater regional reach at lower risk [2].

Having used drones for targeted assassinations against Kurdish separatists, Turkey proceeded to apply them en masse when it intervened on the side of Libya’s recognized government, the Government of National Accord (GNA), in its losing battle against the rebellious Libyan National Army (LNA). The Turkish intervention rapidly reversed the fortunes of the GNA,  pushing LNA forces away from Tripoli, then seizing back half the country as far as the outskirts of Sirte in a mere matter of days. Much of this success, recognized at the time, had to do with the application of drones by Turkish advisors [3].

Turkey’s Libyan triumph provided the country with a massive confidence boost, one that probably gave them the determination to see a resolution to the Nagorno-Karabakh conflict within the year.  The problem however, is that Libya makes for a very bad testing ground for strategies, and has done so long before the Nagorno Karabakh conflict entered its stalemate.

Turkey isn’t the first power to see strategies that brought swift success in Libya translate into hard, wearying attrition in different environments. In World War 2, success against the Axis armies at El Alamein and Tobruk convinced Churchill that wrapping up Italy, the  ‘soft underbelly’ of Europe, would be just as easy. Thus thousands of  Allied troops were condemned to spend the rest of the war pushing their way up the mountainous peninsula against a relatively small  German defensive force [4]. In 2011, the relative ease with which lightly armed rebels and NATO airpower overthrew the Gaddafi regime convinced many that the embattled Assad regime in Syria would face a similar fate, thus rendering negotiations irrelevant. The result has been an interminable civil war in which the regime has largely wrested back control [5].

Even those who were convinced that Turkey’s drone war in Libya was a game-changer for armies everywhere noted that Libya’s unique geography, wide, flat expanses of sparsely-populated desert,  made it ideal terrain for mobile forces and bad for defenders, who are exposed to bombardment and outflanking. Few settlements or natural defenses mean that retreat is the best option for survival in a  desperate situation. A small, non-militarized population produces small, mercenary armies for whom retreat or even switching sides is a viable option. With an almost exclusively Sunni Arab-Berber population, opposing sides need not fear sectarian massacres should they or their homes fall into enemy hands. Thus, when faced with the prospect of being picked off by Turkish drones, LNA forces were quick to abandon their gains [6].

Unfortunately for Turkey and Azerbaijan however, Nagorno Karabakh is nothing like Libya, and Armenia’s army is not the LNA.  Far from demilitarized, Armenia is a nation forged in the memory of the 1915 genocide that wiped out the majority of their population, a  memory that Turkey’s president stoked recently by referring to  Armenians as ‘remnants of the sword’. The deeply sectarian nature of the conflict is leading Armenian forces to fight against the odds to defend settlements that would face ethnic cleansing should they be abandoned [7].

They have one advantage in that Nagorno-Karabakh is a tough,  mountainous region, within which the Armenians have spent almost  30 years digging their own defenses. Even with drones picking off armour and artillery from behind, they have for the most part held off Azerbaijani frontal assaults where it counts, and are making their enemies pay a high price for every mile lost. Where Azerbaijan has advanced, it has been in easier, lowland areas with little Armenian civilian presence. Otherwise, vast material advantages and cutting edge technology have not made a decisive difference so far, and there’s no indication that they will any time soon [8].

As Azerbaijani troops continue attacking fortified Armenian positions and bombarding civilian centers, there are better examples to consider than Libya. Ever since the first day of the Somme in 1916, we have known that massive barrages alone cannot dislodge entrenched defenders, and ever since the Blitz we have known that aerial bombardment of civilians doesn’t destroy civilian morale. Such precedents are more pertinent to Nagorno-Karabakh than UAV  success in Libya.

Turkey may yet see its new tactics triumph in Nagorno-Karabakh, but the chances of it being decisive are low, and all three countries look to be in for a long, costly slog before we find out.