NATO and the Future of Warfare – An Interview with Sven Koopmans 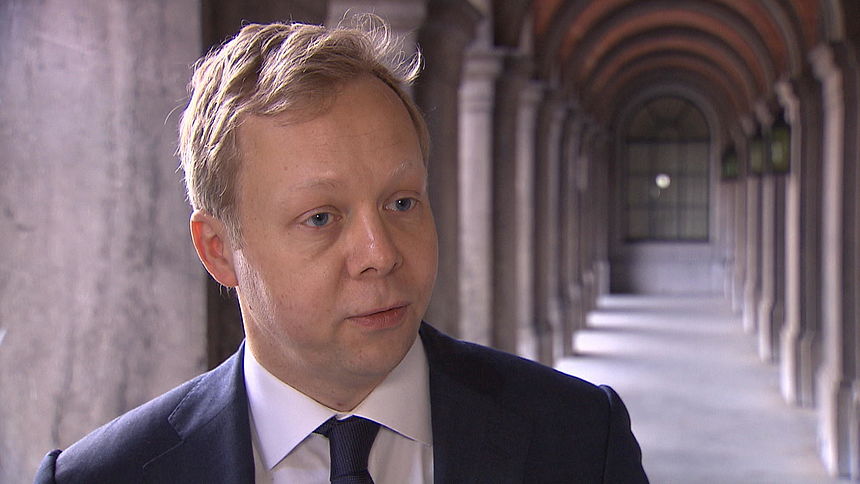 Sven Koopmans is a diplomat and former member of parliament for the VVD, the largest party of the Netherlands. Recently, he was appointed as EU special representative for the Middle East Peace Process. He has extensive experience as a peace negotiator, working for the United Nations and being instrumental in negotiations between parties in conflict areas from Africa and the Middle East to Eastern Europe. Before that, he worked as a lawyer specialised in International Law and he holds a doctorate from Oxford University. He is the chair of the Dutch delegation to the NATO Parliamentary Assembly . This is an assembly of parliamentarians from all NATO-countries that regularly meet to discuss NATO’s organisation, its future, and potential threats.

Relevant to the question whether NATO has the capacity to deal with 21st-century threats, is identifying what those threats are. Last year, Koopmans submitted a motion about the necessity for the Netherlands to take the initiative to work on both regulating and containing new potential weapons of mass destruction. Supported by the vast majority of the parliament (merely two of the 150 parliamentarians voted against), the motion is a household name within the Ministry of Foreign Affairs and Ministry of Defence. The most important result of this motion was that the cabinet agreed to pursue the objectives outlined in it. Minister of Foreign Affairs, Stef Blok, confirmed that soon he would meet with experts to prepare Dutch proposals about the containment of these new types of weaponry. That is the most critical part, besides bringing this modern weaponry threat to the attention of NATO’s secretary-general Jens Stoltenberg and the members of the NATO-assembly.

“It is fine to talk about the Russian threat, but if in the future we face the threat of AI-powered, non-manned hypersonic missiles, drone swarms and very advanced forms of robotics, then traditional armies and soldiers simply do not matter: our challenges are much bigger.”

“With a new form of warfare comes a new form of threat. Conventional actors don’t merely pose that threat, but unlike nuclear weapons, these new weapons are also accessible to non-state actors such as terrorists. NATO-members need to be alert to this and need to prepare themselves for this before it becomes an even more widespread problem. Terrorists are already attacking civilian and military targets using unmanned drones. NATO has to invest in solutions to these new forms of warfare, and fortunately, I have been able to put this on the agenda, which is a step forward. It is vital that these threats will eventually be regulated by an international treaty.”

Is this where Cybersec (an annual recurring NATO conference about cybersecurity) comes from?

“Cybersec is obviously not something that was created because of my initiative of bringing this change in the way warfare is conducted to attention, but Cybersec does show that NATO takes these developments seriously and tries to find multiple ways to anticipate it correctly. It is imperative. But when I talk about new ways of conducting warfare and modern weaponry, people mistakenly tend to associate that with cybersecurity and cyberwarfare. And that is a significant threat, and we need to be alert to that. Fortunately, a lot is done to combat this, and cyber defence is a high priority among many NATO-countries.

Another area people often think about is forms of hybrid warfare, such as “little green men” on Crimea or fake news. And all these things are new forms of warfare, and all these developments are incredibly important.

But what I am talking about, and what I foresee as an enormous threat, is a little bit different. Perhaps it is even more critical. It is the aforementioned development of new hardware to wage war, such as drones and robotics. That will radically change the way war is conducted.”

An even larger diversion from traditional warfare with boots-on-the-ground?

“Absolutely. It is still necessary to have an army in the traditional sense of the word, with soldiers, officers and generals. But at the same time, we need to understand that the traditional conduct of warfare is over. Not just the way we have seen it with insurgencies, but also in the sense that country will have to reconsider deploying soldiers to a warzone if all they will be facing there are robots. If the adversaries of soldiers simply cannot die, soldiers in the traditional sense of the word, will erode in their effectiveness.”

Judging from your earlier comments, NATO anticipates these developments and tries to find answers to them proactively.

“Well, there is room for improvement. It is a massive challenge for everyone, not just NATO-members. Slowly but surely, governments and people start to realise the certain impact developments in this field have. But I feel the need to keep reminding people to look beyond research and development, or simply addressing the issues without proactively attempting to solve them. And we need to look beyond the ‘classical’ cases, if you will, such as cybersecurity and hybrid warfare.

Personally, I think the issue is that when we’re discussing the danger of drone swarms, the conversation rapidly steers towards the ethical side of things. For example: should a human be controlling whether the drone attacks or not? That is a very important discussion, of course. Yet we need to broaden this debate, and I do not see enough of that yet. What are we going to do when our opponent uses these technological weapons against us? What if they do not have a human controlling the drone, but AI operates it? Are we prepared for that, and are we willing to sacrifice response time for ethical considerations when our opponent blatantly ignores this?

It’s nice that you’re ethical, but if we only focus on  this side of the debate, we may all end up dead.

As such, I believe we should expand the debate to more difficult questions. About whether we have enough resources to defend ourselves against those types of attacks effectively. And whether we’re investing not just in our offensive capabilities, but also still in our defensive capabilities.”

Aren’t AI- and other unmanned technological inventions regarding warfare already significantly developed by powers such as the United States, Russia and China? Are we still in time by only starting to address this now slowly?

“Some powers indeed are very well developed, including brushing aside certain ethical questions. Yet we all lack understanding about the strategic and political implications of these new forms of warfare. And it is worth asking yourself whether even powers such as Russia, China and the United States can confidently defend themselves against attacks by drone swarms or hypersonic missiles.

Take, for example, aircraft carriers. In the relatively recent past we, as Europe, were happy when there was an additional NATO-aircraft carrier. And we still are, but what happens when drone swarms or submerged drones assault it? Is the carrier still able to defend itself, or is it rendered useless? We need to be able to protect ourselves against these attacks physically. And this has great consequences not only militarily, but also geopolitically.”

There have been public debates about this question, whether great powers, especially the United States, can defend themselves against this type of warfare. It is difficult not to see a paradox in the isolationist policies of Trump such as the withdrawing of U.S. soldiers from Germany when instead your plea argues there should be a dialogue between NATO-members to share best practices and cope with a potential type of warfare we have never seen before.

“It is incredibly important we strengthen NATO and our alliance with the United States. And although Trump stationed soldiers elsewhere in Europe it is a poor signal Trump withdrew troops from Germany. This undermines the coherence of NATO; we simply need to work together to face challenges from the future.

It is why, when, with colleagues, I had a meeting with Mike Pompeo (the U.S. Secretary of State) a while back, I proposed to jointly look into the dangers of these new technologies falling into the hands of non-state actors such as terrorists. He was very receptive, and one week later I was able to go to the Pentagon to lay out these ideas.

The U.S. understands they need to be able to defend themselves against certain dangers and need to cooperate with other sovereign actors to realise that defence. Perfect examples are the way that we, as a collective, agreed not to use chemical weapons anymore. The ratification of the Chemical Weapons Convention shows how binding global agreements against certain forms of weaponry are. This is a source of inspiration when it comes to trying to regulate certain types of unmanned weapons such as drone swarms or AI-guided robotics.

Treaties could also help to limit the sale of material that terrorists could convert to weapons, such as the sale of drones, which are then converted to mobile Molotov cocktails, just to name an example.

These are precisely the things we can talk about at the NATO-assembly. Last June I organised a meeting of the NATO-assembly to discuss just that: ways to prevent these types of weapons from falling into the wrong hands. We had to postpone it due to the pandemic, but I hope it will take place next year.”

Aside from the threat of modern weaponry, do you reckon there is a threat from movements in NATO-countries that consider the organisation something from the past?

“Fortunately not one country is permanently defined by its current administration, although certain developments indeed are worrying. Several weeks ago, I wrote an opinion piece for a Dutch newspaper, in which I emphasised the importance of NATO and its members.

Some politicians in the Netherlands are now testing the waters by proposing to ‘try to find alternatives to NATO, by which they mean: ‘without the United States’, probably because of recent actions by the Trump administration. Others propose an even more isolationist agenda and suggest countries, such as the Netherlands, to withdraw from NATO completely. That would be absolutely disastrous because even Europe as a whole cannot do it on its own.

Of course, we should invest in European defence, but Europe cannot defend the entire continent by itself if, say, the Russians really want to try it. Europe isn’t strong enough to do so. The United States is vital in this. Not to mention the presence of NATO in the rest of the world, as around the globe, there are challenges and adversaries to peace and security as well.

I do want to emphasise Europe should invest more in its defences. And there needs to be more defence cooperation among European countries. There already is close cooperation between European member states, such as large scale military training with German and French forces, and this should not only be continued, but expanded.

But a European army is not just unrealistic, but also very dangerous. It is unworkable because no country would want to give up its sovereignty to that degree over its defence and armed forces. It is dangerous because it would give a signal to the United States that we want to radically change the organisation of European defences, without them. European security will be eroded because of internal division.

A good defence is mainly essential so that, paradoxically, no fighting will break out. Nobody wants a war, at least NATO and Europe do not. And in order to prevent a conflict from spiralling out of control or certain dangerous actors from acquiring destructive weaponry, we need to keep cooperating and strengthening NATO, whether that’s by treaties or by increasing its defensive power.”