Montenegro’s ‘highway to nowhere’: China’s backdoor into Europe and NATO﻿ 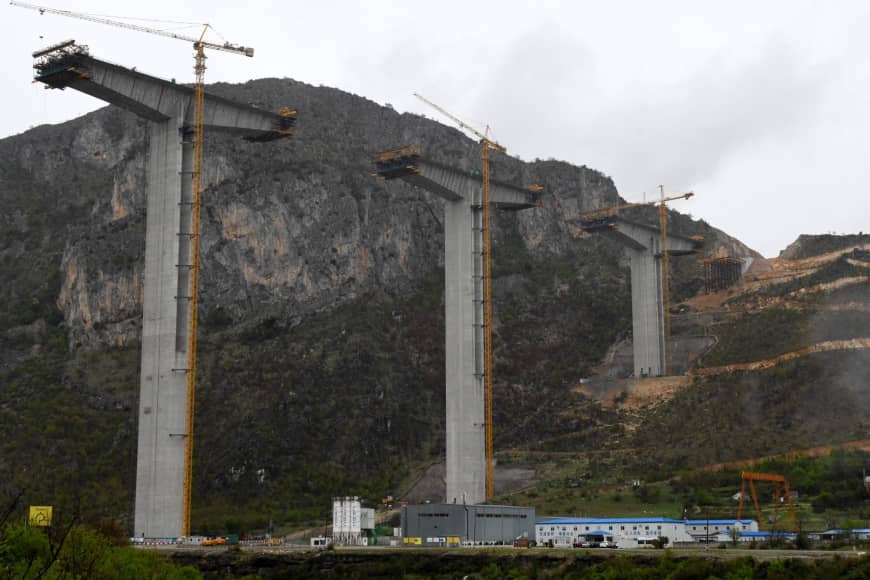 March of this year saw the successful integration of the Italian port city of Trieste into the Belt & Road Initiative (BRI). Italy is the first G7 state to join president Xi’s trillion dollar megaproject, which was a reason for Beijing to celebrate. The Italians have plenty of reason to be excited about the revival of the port as well, since Trieste had lost its importance over the years to alternative ports in the Adriatic.

At this moment, China is in Europe and it is here to stay. The Chinese investments in Italy are not categorised as a direct risk to European security, even though it is hard to assess what the consequences of these investments will be. In this Sunday read, I will address China’s investment in another European country, Montenegro, and the construction of the disputed ‘highway to nowhere’ in the Moraca region. I will also explain why and how these investments materialised and the debt risk that comes with them.

Montenegro is at a crucial point of its trajectory towards full EU membership. It has been a member of NATO since June 2017 and could become a full-fledged member of the EU by 2025 at the earliest (if it commits to European demands, among others about the rule of law and good governance). This means that at this moment the Adriatic Republic only has access to irregular EU funds that come with strict conditions.

These funds were not available for the construction of a highway between the coastal town of Bar and the Serbian border village of Boljare. The highway is planned to run over Montenegro’s Moraca river canyon, some of the roughest terrain in southern Europe. The project was attempted twice, once by a Croatian company and the second time by a joint Greek-Israeli association. Under both circumstances, the project collapsed as no bank guarantees were given in time. Two studies, one conducted in 2006 and the other later in 2012, concluded that the highway would not be economically viable. According to URS, a renowned American construction firm that carried out one of the studies, this had to do with a combination of low traffic numbers and marginal local economic forecasts creating the risk that no return on investments would be guaranteed. Therefore, no loans were granted.

Until Beijing appeared on the stage and offered a loan of 809 million euro. The loan was accepted by the Montenegrin government. But why? Why did the government take a loan for a project that does not appear to be economically feasible? And why is China willing to jump into a project that others back away from, on an investment that seems to be a lost cause?

The planned highway can partly be seen as a prestige project. According to Vatroslav Belan, adviser to the Deputy Prime Minister of Montenegro, this project will revitalise the economy and restore a sense of prestige. It reminds people of the glory days of Yugoslavia and the grand socialist projects under Tito. Ever since the wars of independence of the 1990s, Montenegro’s economy has not fully recovered. The government sees in the Chinse investments an opportunity to create “a pathway to the modern world’’. The ruling Democratic Socialists party hopes that this move will be rewarded by the Montenegrin electorate during the next elections.

But why did China offer a loan in the first place? First of all, one of the reasons to dive into this risky investment is that it provides them a win-win situation. Whether Montenegro will be able to repay the loan or not, Chinese investments in the Balkan will be paying off. Not only is China strengthening infrastructure needed for its cargo and trade routes with Central and Eastern Europe (CEE), these investments are also benefitting China by generating political goodwill with their economic partners in the region.

After being handed a controlling interest in the Greek port of Piraeus and vowing to revitalise the Italian port of Trieste, the former Yugoslav republic serves as another point of entry for Chinese goods into Europe. In the game of Weiqi, you win over time, over many turns, relatively to your adversary and by using the tactic of surrounding them. China’s gamble for Montenegro might pay off, as another Chinese Weiqi stone seems to be surrounding Europe. Montenegro, as well as other Balkan states, are China’s backdoor to Europe and the EU. As was stated in an article by POLITICO: ‘With several Balkan nations in line to join the EU in the coming years, China could have several more close friends at the decision table in Brussels.’

But what if Montengro, lacking EU support at this point, fails to repay the loan? What if the tiny Adriatic Republic becomes entangled in debt? That is where the real risk come into play.

Montenegro is among the most vulnerable nations to accept Chinese loans. The loan for the first part of the highway will likely result for Montenegro’s debt to rise to 80% of its GDP. This has caused EU officials to fear that the tiny Adriatic republic will become entangled with China’s ‘debt-trap diplomacy’. This is similar to a scenario that unfolded in Sri Lanka when Chinese investments reached $1 billion. The government was forced to hand over a port in the Pacific Ocean as part of compensation efforts. A similar situation also happened in Djibouti, where as a result China opened its first military naval base abroad in order to ‘protect Chinese investment’. A Munich Security Conference report stated that about 40% of Montenegro’s total external debt – the highest measured percentage – is destined for China. There seems to be evidence that China invests where it knows that the loans are highly wanted, but unlikely to be paid back.

Montenegro is rich in islands and ports. What are the implications, for NATO, the EU and European Security as a whole, if Montenegro falls into a ‘debt-trap’ and China demands compensation in the form of a port? It might apply the same rationale as it did in Djibouti, wherein a military presence is claimed to be necessary to guard Chinese economic interests in Europe. A chain of events, that has already been set in motion, combined with a chain of wrong decisions, by the EU, the US and the Montenegrin government, can lead to China’s first ever military presence on the European continent, on the territory of a NATO member. It seems that a Weiqi master knows how to be patient.