MEET THE MAN WHO PUT REALISM BACK IN TRUMP’S FOREIGN POLICY. 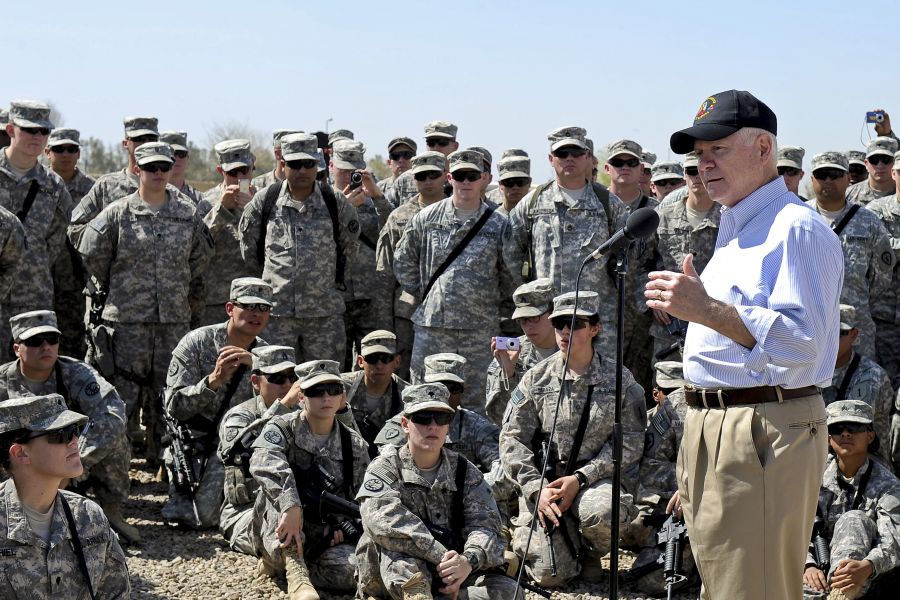 Trump was elected in office with his now famous message of America First. According to Trump America should be done with its foreign entanglements, with its wars in jungles and deserts thousands of miles away, with its vast spending in cross-Atlantic partnerships in which allies relax and sit back, just done with that leadership role that only seemed to cost America its shiny flair. Now, more than a year into his presidency, the US have not withdrawn from NATO, the US have sent  additional troops to the Middle East, and the US are still all over the world reaffirming allies that the US will still be there, standing right next to them. Trump might have scratched his head a few times in the past year, wondering how America’s foreign policy still ended up so much the same. Meet Robert Gates, the man who put realism back in Trump’s foreign policy.

It is now more than a decade ago that George Bush invited Robert Gates to his ranch to discuss the possibility of accepting the job of secretary of defense. The US were trapped in two wars in the Middle-East and not only did the strategy of Donald Rumsfeld not work, scandals over prisoner abuse in Guantanamo Bay and Abu Graib detention centers left him politically damaged. It was time for a change in leadership. His father, H.W. Bush, recommended him a respected colleague he had worked with more than a decade ago: Robert Gates. Gates was the president of Texas A&M University, but don’t get fooled by his friendly appearance: this man was a veteran of Washington. Having worked in the national security apparatus serving under six presidents, most recently as the Director of Central Intelligence at the end of the Cold War, Gates had a lot of experience. He accepted the job and consecutively became the 22th secretary of defense. This would be his last time serving the U.S., but also the most important one and the one that would, more than a decade later, enable him to become an architect of Trump’s foreign policy elite.

For Gates, the US have a role to fulfill in the world, but a role in which military power should be a weapon of last resort.  If the US decide to use their vast military power, they should do it with force and with responsibility. ‘The U.S. military’s ability to kick down the door must be matched by our ability to clean up the mess and even rebuild the house afterward’, he famously said. He served not only under Bush but also under Obama, and when he left office in 2011, he was not only the longest-serving secretary of defense, but also the best, according to Foreign Policy [1].

Fast forward to winter 2016 and a newly elected Donald Trump was tasked with the difficult task to put together an administration that would support him in pursuing his political agenda. He decided to invite Gates to the Trump Tower to discuss potential candidates. This discussion led to a selection of very important picks: in the following months, Rex Tillerson, John Kelly, Herbert McMaster and James Mattis would be accepted by Congress. Four persons closely tied to Gates and his vision of the role of the US in the world: one of global American commitment, with hesitance to use the military, but to do so with overwhelming power if other options are missing. The press quickly provided them with a nickname because of their differences with Trump: they became the grown-ups in the cabinet.

Rex Tillerson became secretary of state, but his appointment wasn’t not out of the blue: with ExxonMobil he was a client of RiceHadleyGates, the consulting firm of Condoleezza Rice, Steve Hadley and Robert Gates. Gates was the person advising Trump to take on Tillerson and he gave a formal recommendation speech at Tillerson’s Senate confirmation hearing. John Kelly? He was a senior military assistant to Gates and was also introduced by him to the function of Secretary of Homeland Security. He later even got a promotion and currently spends his days as a stressed out Chief of Staff to the president. Herbert McMaster became the National Security Advisor after the quick downfall of Michael Flynn in February 2017. He got his promotion to general in 2008 because of a personal intervention by Gates. Finally, Jim Mattis has also been a close subordinate of Gates and got promoted by him to supervise the Joint Forces Command in 2007 and Central Command in 2010. Besides maintaining strong personal relationships Gates maintains with these four men, Gates has been vocally supporting them too throughout the year in the media.

Gates has been effective in pushing Trump to surround himself with people Gates knew very well in his long career and who mostly share his vision on American leadership in the world and the role of the military herein. And no, Trump can’t be totally tamed by some grown-ups. His foreign policy is often still very much based on ad-hoc decisions and his tweets make leaders shake both across the Atlantic and the Pacific. But, where would he have been without them? Trump’s strong language towards his allies has been softened, the chaos in the White House has significantly decreased because of major efforts of Kelly, and American troops are definitely not leaving all corners of the world. It is true that many aspects of Trump’s policy that the grown-ups were opposed to – like his stance towards the Iran Agreement and the Paris Agreement and his travel bans – still became reality. But we also know that these four are men with experience and men who dare to stand up to the president. Ask yourself, where would we be if these four grownups wouldn’t have been talking sense to him all that time?

Now that Tillerson is finally relieved from his duties, and rumors are that the same might happen to McMaster, we see the influence of the grownups waning. In the long haul, Trump senses that surrounding himself with people with a similar opinion to his is much easier. But that doesn’t take away the fact that Gates was able to surround the impulsive Trump with very experienced and realist advisors for already more than a year. We do not know what will happen to the Trump administration over time but we can say that overlooking the chaos there was at least one true grown-up: Robert Gates.