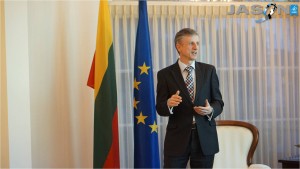 It was on the 13th of January 1991 that ‘The January Events’ took place. During these events, Soviet forces invaded Vilnius in reaction to the Lithuanian Restoration of Independence (March 11th 1990), and cracked down on protestors—killing 13 and injuring over 1,000. Past Tuesday, 25 years after the start of these events, JASON Institute visited the Lithuanian Embassy to discuss the economic challenges and, yet still present, the Russian threat to Lithuania and the other countries within the Baltic States. Ambassador Darius Jonas Semaska opened with referring to this special date, but stated that far from quenching the spirit of independence, the Soviet [or Russian] actions only cemented Lithuanian resolve for self-determination.

During the brief introduction about the history of Lithuania, the ambassador went on about the January Events, in which he was present. Initially, in the first few years after 1991, Lithuania and Russia actually had a cordial relationship – Lithuania believed they could restore ties with Russia in a post-Cold War World, through good dialogue and bilateral negotiations that went quite well. However the ambassador observed that, since then, there has been an increasing effort by the Russian leadership to restore its old sphere of influence, and to have the world recognize its right to the areas around Russia.

Before continuing about the Russian threat and the state of defense of Lithuania (and the Baltic States) at the moment, there are interesting economical developments that influence the relationship with the EU and Lithuania’s other neighbors, such as the use of Euro starting January 1st 2015. Although the Ambassador noted that this switch of Value is only for the ‘image’ since the Litas was already tacked to the Euro from 2002. The ambassador was a great advocate of liberal market economics, free trade, and—during times of crisis, the endurance to accept financial austerity measures. He stated that, due to the Lithuanian discipline of keeping the market free , it’s economy has experienced relatively good economic growth even since the crisis

DEFENSE AND THE RUSSIAN THREAT
Taking a look at defense, Lithuania is a small player. (8,000 total—3,000 of which fighting force). The majority of the defense expenditure is invested in a small expeditionary force which has long contributed to the NATO mission in Afghanistan. Lithuania hopes by showing this commitment to NATO, it will in turn ensure that NATO sticks to its promise (article 5) should that be necessary. This because Lithuania still does not have top-tier fighter jets, and is still depending on NATO Baltic Air Policing Operations – as last year alone there were 150 incidents of Russian aircraft intruding in or near Lithuanian airspace.

An interesting discussion started as representatives of the Georgian Embassy present during the visit, asked Lithuania questions about the similarities with Georgia and the chance Russia might again call upon the pretext of “protecting Russian citizens” to justify an invasion. The Ambassador of Lithuania pointed at the differences: the Russian-speaking population in Lithuania is relatively small compared to the other Baltic states (6% compared to Estonia’s 25-30%) and – in Lithuania, almost all Russian-speakers are Lithuanian citizens (in 1990 and 1991, Lithuania offered free citizenship to all Russian-speakers within its borders; and 99% accepted the offer). So Russia should not be in a position to use “Russian citizenship” as pretext. Nevertheless, Russia has been trying to build a ‘5th collumn‘ in Lithuania. For instance, the Russian consulate general in the Port of Klaipeda is disproportionately staffed (250 staff for a city of 160,000) and has in recent years been trying to organize demonstrations against the Lithuanian government. In foreseeing any future changes in the security order, as Germany stated security in Europe can only be reached with, not against Russia, the Lithuanian Ambassador argued that the key precondition to a security order was a contractual relationship, in which both countries stick to their commitments (specifically regarding borders and sovereignty). As such, Lithuania would certainly be open to a more productive and harmonious relationship between the EU and Russia, but emphasized that it is up to Russia to first respect the fundamental agreements over sovereignty.