LECTURE: CLIMATE CHANGE AS THE MAIN SECURITY ISSUE FOR THE NEXT CENTURY? 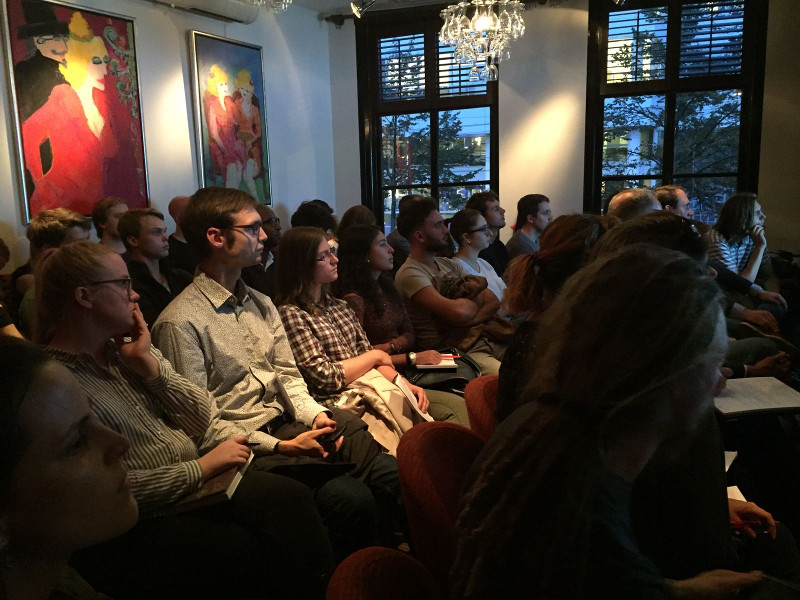 In recent years, many foreign affairs experts have attempted to demonstrate the linkages between climate change, migration and potential conflicts. Dr. Louise van Schaik opened the lecture on climate change by asking the participants to challenge themselves and to question what is written in newspapers or what politicians say about climate change. There are certain facts that are undeniable when talking about the issue, but – at the same time – (the securitization of) climate change can also be misused to set an agenda. Dr. Louise van Schaik therefore argued that it is important to remain critical of the use of climate change in political discourse. When looking at climate science there is a certain consensus on what effects climate change can have on our planet. Temperatures are expected to increase with two degrees Celsius in 2100 and sea levels are also expected to rise. This can certainly cause more extreme weather events in the future. Dr. Louise van Schaik further elaborated that industrialization and other human processes have caused this impact on the climate system. She then asked what this meant for the risks and threats that are related to climate change. Firstly, there might be more pressure on food production and water supply. Due to climate change water scarcity increases, which results in less water for food production. Secondly, land degradation can occur which can have a tremendous effect on low laying island (they simply cease to exist). Thirdly, migration patterns may emerge as a result of climate change. Dr. Louise van Schaik delved deeper into this third point by mentioning that within the literature on migration and climate change scaremongering seems to prevail. The literature speaks of millions of climate refugees that will seek a new home as a result of climate change. She argued that although this might certainly be the case, one cannot look into a crystal ball and predict these kind of numbers with certainty. The research on this topic so far is really thin. There is evidence for regional migration and it could arguably cause tensions and conflicts in the regions affected. However, real indications of a max exodus or that people who currently flee to Europe do so because of climate change are minimal. Climate change is accepted as a threat multiplier and the challenges of food and water scarcity are related to it as well as to conflict risks. However, the magnitude of this challenge and its relationship with other conflict risks factors, migration patterns are still underexplored. It’s a topic that requires a lot of research and simply needs more evidence. Nonetheless, there is a clear recognition that climate change poses a risk to humanity.

Dr. Frank Biermann continued and argued that migration might indeed be one of the potential impacts of climate change that might be observed at some point in the coming century. Natural scientists argue that the human species have pushed the planetary system so far outside its originally developed boundaries, that earth’s environment is switching to alternative modes of operation which may prove irreversible and inhospitable to humans. Dr. Frank Biermann stressed that this is not meant to be alarmist, and is something that will not happen today or tomorrow. Natural scientist see this as the long term evolution of the planetary system. Dr. Frank Biermann further argued that the international community is ill equipped to deal with this challenge as “ we are still dealing with 193 nation states that make little progress in developing new institutions that can deal with the issue of climate change“. One has to think the unthinkable: that climate change cannot be prevented and that we have to work on adaption on a global, national and local level.

With regards to migration there are many studies that try to predict how many people might actually be affected by climate change. These numbers range from 200 to 300 million people that are likely to be affected. Dr. Frank Biermann acknowledged that these numbers are on the higher side, as he argued that “ they [the numbers] are all based on certain scenarios and assumptions, but we simply do not know how our social and economic systems will be in 2050 and 2100. We simply don’t know what is possible in terms of adaptation“. Additionally, the definition of migrants within the context of climate change is also important when counting the number of people affected. As Dr. Frank Biermann stated “Do you – for example – count every civil war refugee, because the civil war might be caused by climate change?” But -on the other hand – bashing the alarmist doesn’t mean that we should say: “all is fine”. There is no arguing that there are low-lying countries that do not possess the technical and financial means to deal with the issue of climate change.

Dr. Frank Biermann stressed that discussing climate change is a difficult debate because it links many discourses and interests. For example, the debates on terminology of climate refugees are already highly contested. Do you call climate-induced migrants ‘refugees’, ‘voluntary migrants’ or ‘environmentally displaced persons’? Every discipline has its own reasons to use certain terminologies. The Geneva Convention on refugees does not include climate migration. Therefore lawyers would argue that you cannot call these people refugees. He further argued that it also is a political issue, as a refugee has a higher need of protection than a migrant. The issue of climate migration is interlinked to all kinds of political agendas. For example, with regards to the northern state agendas northern governments might seek to avoid framing climate migrants as “climate refugees” due to potentially huge financial and political costs. Furthermore, within the security agenda mass migration is becoming framed as cause of potential conflict (in Southern countries), and even as a (immigration) threat to Northern countries. There are more positive debates however, that frame climate-related migration as a type of adaptation that increases the resilience of communities. Within these debates it is argued that migration has always been present throughout the course of human history starting with the first humans originating from Africa. This debate focuses on the positive aspects of migration (income, diversification, etc.). Dr. Frank Biermann concluded that although one can be skeptical about the actual numbers that will be affected, there is no denying that when one looks at the current predictions and current policies, global warming may indeed cause a large refugee/migration crisis. So what can governments do about it?

Dr. Frank Biermann proposed a new governance system for climate refugees. It is a solution that would be specifically tailored for the needs of climate refugees and would call for early action from the international community. This system would entail a decision-making procedure that would identify certain places that are threatened by climate change in the long term (50-100 years). Once identified, the countries threatened can approach the international community for assistance. There would be no need to wait for extreme weather events to strike and regions to be flooded. Climate change is after all a phenomenon for which we can prepare and plan. As such, this procedure should consist of planned relocations and long-term resettlement programs rather than emergency responses and disaster relief. Unfortunately, such an international mechanism that decides on what to do in these kind of situations does not (yet) exist. Dr. Frank Biermann underlined the necessity for international burden sharing and argued that it should be key within this new governance approach. The international community should not wait until 2050 or 2100 as it will be too late for an organized response. Planning and the development of a related institutional setting must begin now.