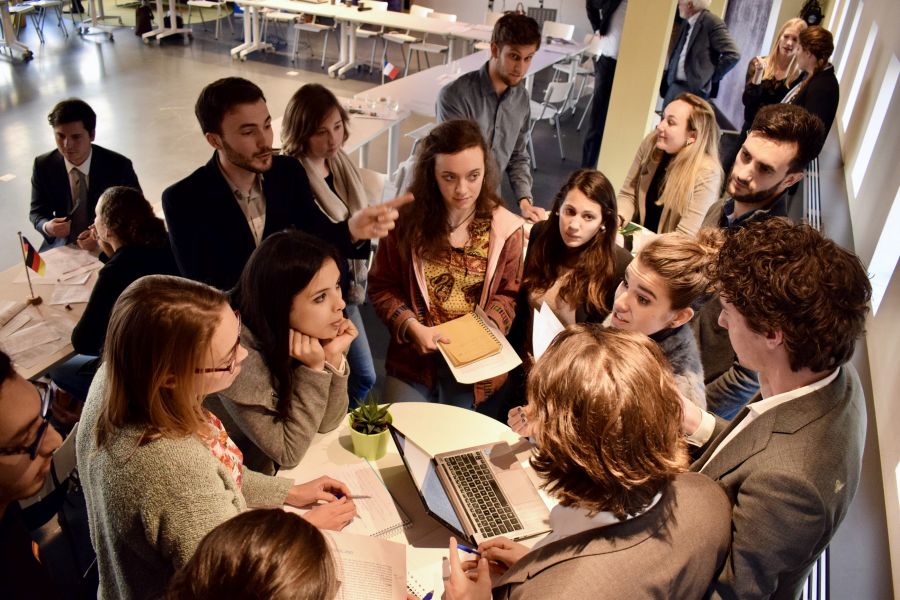 On the 3rd of November, the JASON Institute organised a conference on migration to Europe. The day started with two key-note speakers. Our first speaker was Fransje Molenaar, who obtained a PhD from Leiden University and is one of the Faces of Science for the Royal Netherlands Association of Arts and Sciences’ (KNAW). She currently works for the Clingendael Institute as a research fellow, where among other topics she studies human smuggling industry in Africa, with a particular focus on the Sahel and Libya. Fransje Molenaar introduced the migration crisis, focussing on the EU policies and the different flows of people. As she is an expert in African migration streams, her focus was mainly on Niger and Libya. She explained the country of Niger as being an area of transit; many migrants travel through Niger to reach the north of Africa. Libya, on the other hand, is the gateway to Europe. She also mentioned that the EU established anti-migration policies in Niger, but that these negatively affect the population and that the money made available for Niger does not benefit the country yet. On top of that, migrants are in danger because of human trafficking and the increasingly dangerous trip. According to her, these are issues that are not discussed sufficiently in the current debate on migration. She urges not to only view the migration issue from the EU point of view, but also to focus on the conditions of the migrants.

Lily Sprangers was our second speaker, and she works as a full-time manager for the Leiden Asia Centre. This independent research center focuses on themes such as human rights, the relationship between Asia, China and Europe, and culture and lifestyle. Previously, Ms. Sprangers was director and one of the initiators of the Turkey Institute, which aimed to increase the public knowledge of contemporary Turkey and its position in the world. Ms. Sprangers discussed the EU-Turkey declaration and focussed mainly on the Turkish point of view of this deal. She started off by explaining that Turkey has always been a country that received and welcomed many migrants, even throughout the history of the country. With the war in Syria, Turkey again received over three million Syrian refugees, which is a huge amount for a country to handle. The EU also recognized this and wanted to help relieve Turkey’s burden. The “Turkey Deal” took place. At its core, the agreement aimed to address the overwhelming flow of smuggled migrants and asylum seekers traveling across the Aegean from Turkey to the Greek islands by allowing Greece to return to Turkey “all new irregular migrants”. In exchange, EU Member States would increase resettlement of Syrian refugees residing in Turkey, accelerate visa liberalization for Turkish nationals, and boost existing financial support for Turkey’s refugee population. However, as Ms. Sprangers argued, the deal only produced very modest results in the EU. Resettlement of Syrian refugees barely took place and Turkey still carries a huge burden.

After the two lectures, the floor was open to questions from the audience. Someone asked Ms. Molenaar about the difference between the migrants in Libya who decided to stay in the country, or leave to the EU. Ms. Molenaar responded that not all migrants want to stay, but some are forced. According to her, it is profitable if smugglers keep the migrants in one place and use them for human trafficking or forced labour. Smugglers even search for migrants and pick them up from the streets. When they are finally able to escape, they often want to go to Europe to escape the terrible conditions in Libya. Furthermore, a question about Turkey was raised. It was asked whether the Turkey Deal is a settled situation or that there might be a next stage. Ms. Spranger answered that there is probably not going to be a next move. Both the EU and Turkey do not want to stop negotiations, because there are implicit benefits for both parties. She argued that for the EU, the stream of migrants has been stopped. This has had political benefits. For Turkey, the deal is a way for the country to be able to act as a major player in the world. Moreover, Turkey cannot afford to be on bad terms with the EU.

The two lectures had ended and everybody could have lunch at the venue. After lunch, the workshops took place. Every participant had been appointed to two workshops of thirty minutes. There were six experts that had organised the workshops and wanted to bring about their expertise on different aspects and issues of migration. The experts of the day were Mark Klaassen (Leiden University), Jan Marinus Wiersma (Clingendael), Marjolein de Ridder (Dutch ministry of Foreign Affairs), Yuri Schutte (Dutch ministry of Safety and Justice), Rena Netjes (Journalist) and Beste Isleyen (University of Amsterdam).

After the workshops it was time for the highlight of the day; an interactive simulation with several rounds of negotiation. Participants were appointed to different countries to simulate a negotiation on a declaration on migration. There were different negotiation rounds in which countries could make up their own declaration and later negotiate and pair up with other countries to deliver a joint declaration. The end goal was to reach consensus on a new declaration on the migration issue. Several EU countries were represented, as well as Libya and Turkey. This made it very interesting and dynamic. Especially Turkey, France and Germany got entangled in a heated discussion about EU Visa’s for Turkey.

All in all, it was a very interesting and interactive day. Everybody enjoyed the lectures, workshops and especially the simulation. The day was concluded with drinks and a chance to network. The JASON board wants to thank all participants, speakers and experts for participating in this fantastic conference!