IRANIAN PERSPECTIVE ON THE MIDDLE EAST 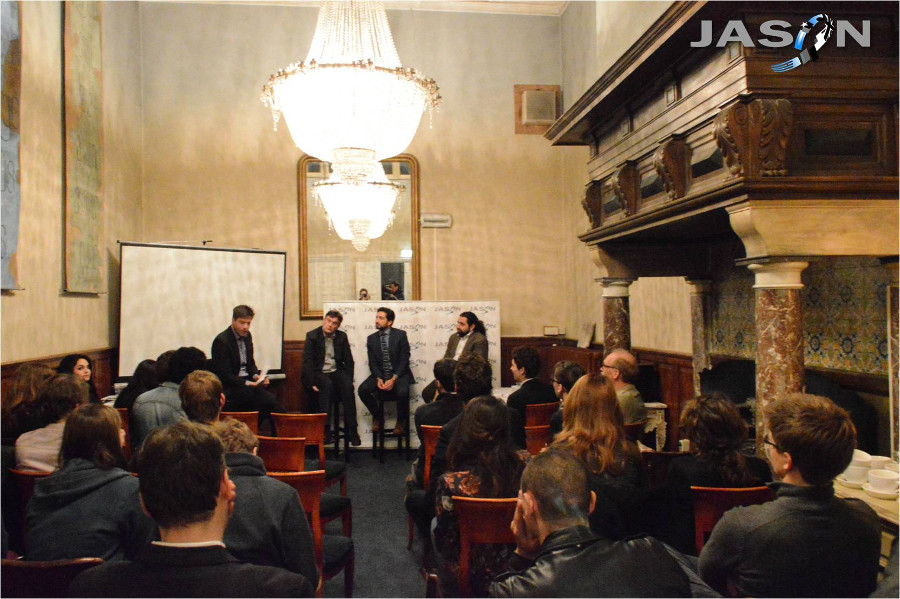 Report – On Monday December 1st 2014 over more than 50 students, (Young) Professionals and several representatives of Embassies gathered at the Haagsche Kluis, Den Haag, to learn more and debate about the Middle East in the upcoming decade seen through the perspective of Iran. As was written in The Economist on November 1st, Iran’s position in its region, increasingly influential until recently, is becoming more precarious. What could we expect from Iran in the upcoming decade?

After welcoming all the participants – ” a more than full house ” – moderator Bart Hoogeveen (Clingendael Institute, red.) introduced the three speakers of the night: Shervin Nekuee ( Sociologist and Editor-in-Chief of IranGeo.net), Damon Golriz (Publicist and Researcher The Hague University) and Georg Hintzen (Research Coordinator Governance and Security). By touching up on the many current debates in the West about the Middle East, Bart Hoogeveen contextualized the evening’s topic of debate.

FRAMING IRAN
The first to speak was Shervin Nekuee. Starting with a personal anecdote about a meeting with a friend and former diplomat from Iran in Paris in April of this year who was visiting his son – both exiled from Teheran by supporting Moussavi – Nekuee displayed clearly the position of Iran within the Middle East. After the hostage crisis (the diplomatic crisis between Iran and the U.S. starting in 1979) the West keeps on framing the Islamic Republic within the framework of a possible nuclear threat or a “possible friend”. But, according to Nekuee, there is a lack of knowledge in the West about Iran and its weaknesses and strengths. That the state is not coherent and sure not homogeneous leads to a lot of competition between the different groups within Iran and makes these groups smart and thus a strength of the Islamic Republic. Nekuee foresees that some countries in the Middle East will show stability in the next decade and it shall be those countries that will take a leading role in the power play.

STRUGGLES BETWEEN SUNNI AND SHIA KEY TO FUTURE PATH OF MIDDLE EAST
Second speaker, Geor Hintzen, broadened the perspective by giving the participants a view on the playground in which Iran is operating. With the up rise of ISIS the once settled boundaries in the Middle East are now questioned. However a lot of the inhabitants of countries in the Middle East such as Iraq, seem not to see themselves as an Iraqi but as a member of one of the religious groups like Sunni or Shia – also because of the strong social systems of for example Hezbollah in the South of Iran. The environment in which the Middle East is searching for an identity, is “an intricate mesh of socioeconomic, geostrategic and religious factors” in which the Sunni – Shia struggle is one that will determine the future of the Middle East, according to Hintzen. Besides the diversity of the region and within the Islamic Republic, Hintzen pointed at what he calls the most overlooked factor in the possible scenarios of the Middle East: the Middle East is drying out. No longer depending on oil will change the settings in the Middle East: but Iran’s nuclear programme is a clear strategy for adapting to a future without oil. For the upcoming decade it seems there are only negative choices to make although the key would be to know the wants and needs of the groups in the region. Hintzen stated: “The people in the Middle East should learn to talk to each other again, make compromises and learn to live with each other like they did for centuries.”

POSSIBLE SCENARIOS FOR THE MIDDLE EAST IN THE UPCOMING DECADE
It was final speaker Damon Golriz who outlined three possible scenarios for the future. He sees the hardliners are currently gaining more ground in Iran, what could lead to a closed society where conservatives have a greater power – a first scenario. The results of the elections planned for the Summer of 2015 will show if the conservatives indeed win power over the moderists in the Islamic Republic.
A second scenario “is perhaps the biggest wish of the West” for it foresees more power for the “so-called moderates and reformers” of Iran. This would mean Iran would try to build a better relationship with the West as it softens the idealization of domestic policies and the opens up the economy. However, this scenario does not seem close because, as stated befor, Golriz sees the hardliners win more ground.
How likely would be the collapse of the Islamic Republic? It’s the third scenario Golriz outlined and the catalyst for a collapse could be the death of Ayatollah Khamenei. The death of Khamenei together with a possible coup and the call for more liberal democracy – the democratic values are already known with the Iranians living in the bigger cities – could determine change in the future in the upcoming decade.

After a break with coffee and tea, the Questions & Answers -session began. With every speaker answering each question from his own perspective and the following debate between the speakers about the given answers made it very clear that the complexity of the situation in the Middle East and Iran within that, is highly difficult to overview. Outlining scenarios for the future of the Middle East is not easy. One unexpected turn, the diversity within the country, the (possibly) underestimated power of women in the state or ignoring the usage of innovative technologies by younger generations, could make the Iranian position and therefore the perspective on the Middle East change.

Shervin Nekuee is Editor-in-Chief of IranGeo.net. Anna Yeadell-Moore, editor of the website, published a broader report of this event: http://irangeo.net/irans-role-and-position-in-the-middle-east-a-debate/