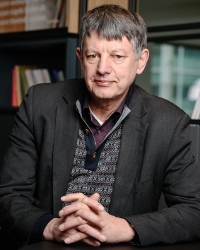 Dr. Abels is professor by special appointment of Governance of Intelligence and Security Services at the Institute of Security and Global Affairs (ISGA) at Leiden University. Before that he worked as an analyst for the Domestic Security Service (Binnenlandse Veiligheidsdienst – BVD), the Civil Intelligence and Security Services (Algemene Inlichtingen en Veiligheidsdienst  – AIVD). He currently works for the National Coordinator on Counterterrorism and Security (Nationaal Coördinator Terrorismebestrijding en Veiligheid – NCTV) where he is part of an advisory committee on terrorism prevention. He is the author of the new book ‘Spionkoppen’. Herein Dr. Abels brings forward a theory on intelligence leadership based on eleven in-depth portraits of the eleven heads of the Dutch civil intelligence and security service (AIVD). The book examines who these people were, what their impact and legacy was. In addition he takes a critical look at their life before and after joining the AIVD and much more.

Editor’s note: In this part of the interview we discuss Dr. Abels’s career as a national security expert and analyst, the evolution of security matters, how intelligence and security services operate in the current climate, popular misconceptions and fake news/misinformation.

David
With the appointment of Dick Schoof to the AIVD, the concepts of national security and Schoof are inseparably linked. I would say with your record, the same could be said about you. You’ve seen the development of national security from within. And you’ve also shaped it. How did you experience these developments regarding events, actors, trends?

Dr. Abels
I can start in 1984. That’s the year I started in the strange world of intelligence and security services. I started as an analyst at the BVD, as it was called in those days. Those were the final years of the Cold War. It was becoming increasingly apparent that the main threat from the Soviet Union was eroding and that new threats were arising.

I started as an analyst. One of the most impressive things I experienced in those years were, of course, the Tiananmen uproar, the fall of the Berlin Wall and the killing of Ceausescu and his wife all in one year in 1989. Those were the years when I was supposed to analyze all the events happening in Europe and the implications of these events for the national security in the Netherlands. So that was my first experience in this field. After that, the world changed. The [Berlin] Wall fell. Russia, China and communism itself seemed a threat from the past. We concentrated on emerging threats. The new threats came from all kinds of security problems that were connected with the presence and integration of ethnic minorities in the Netherlands. There were imported conflicts in the Netherlands, like the Kurdish PKK problems, the Palestinian Israeli conflict, the Armenian (ASALA) conflict  The IRA was still active at that moment as well.The same could be said for far-right extremism and foreign interference within certain communities. These were the threats we were combatting in those days. Moreover, the threat of the radical islam was also gaining traction . That turned out to be the main problem for the next decades. It was also the problem I was confronted with most intensively because I was an analyst tasked with examining these problems, which I did until 2004 for the BVD and the AIVD.

On November 2nd 2004 you had the famous murdering of Theo van Gogh, which was really a black day in Dutch history, but also for the service itself. I remember it like it was yesterday You can call it an intelligence failure; we were closed in on the person who committed this murder. But we were more busy fighting the last attack than preventing the next one. We had the idea that there was a threat from a group as the attacks in Madrid (March 2004). That is why we thought that an attack would be committed by a group.

Then it turned out to be one person who killed one specifically chosen target. Who happened to be the son of a man who worked  at the BVD his entire life. On that day, I was sent to the nationale crisis center as advisor to the head of the service. When I arrived there I met the new Dutch coordinator on counterterrorism (NCTb), Tjibbe Joustra. He had just started a day before. He didn’t have an office at that moment. He asked me if I could help him with setting up an analysis department. And that’s the day when I started to work more in The Hague on the coordination level. I had the opportunity to create a new analysis group with experienced people. They were recruited from all surfaces of society. We started to analyse what was happening in regard to the situation surrounding the terrorist threat that occurs here. So that was the moment I switched from an intelligence producer to an intelligence consumer.

For 36 years now, I have been busy in this world. I have seen a lot of threats, a lot of intelligence successes, preventing attacks, preventing all kinds of threats for national security. But you always know you will miss some of these threats. That’s also a part of the business that you do. You have to take into account that new problems arise and that something occurs that you didn’t expect. That’s part of the deal when you work in intelligence. You make prognostic analysis. What do we expect in the future? We’re not historians, but forecasters, as we used to wear in the days of the Cold War t-shirts with ‘the prognostic team’ printed on it. That’s what we do; we try to predict events that still have to happen. Predicting is something difficult for people to do.

David
You mentioned that back in the days, certain international issues and events were imported into the Netherlands. For example, you talked about the Kurds and Islamist terrorism. This transnational aspect of security threats appear more present than ever today. Threats don’t respect national boundaries. Moreover, state actors no longer automatically present the primary threat. What does this entail for national security today – for the NCTV and the AIVD? Was it easier back in the day? How do you combat an enemy that you don’t know?

Dr. Abels
Yes, that’s always difficult. Nowadays, I often have the impression that I’m back in the years when I started during the Cold War, because state actors’ threats are back on center stage. For a long time, we thought these threats were a thing from the past. There was little attention for state threats, with a few exceptions like Iran. Nowadays, actors such as Russia, China, Iran, but also other actors are pushing significant threats towards the Netherlands. All the knowledge we built on countering terrorism is still important, but we have to build new knowledge about how these new state threats will occur.  We call these hybrid threats. In the old days threats consisted of  a lot of violent confrontations. What they try to do now is to weaken the enemy differently. Cyber didn’t exist in the Cold War. But now cyber is an important domain in which these hybrid conflicts evolve.

Another actual subject is fake news and disinformation What we see is that actors like China and Russia try to influence the public opinion, They try to influence the trust of the people in their own government in a negative way. Thereby they weaken their enemy. So no weapons, but just information. An example: at the moment, there are two journals which publish a lot of fake news distributed in the Netherlands: De Andere Krant en de Gezond Verstand Krant.

A lot of mistrust in the authorities and conspiracy theories undermine, for instance, the way we are dealing with the COVID crisis). So you see how important it is that we can discover these activities, and – even more – can disrupt these activities. This is complex. We don’t have a real answer to how we can disrupt this apart from raising awareness. That’s the one thing you have to begin with, but you have to counter these threats in other ways as well.

Dr. Abels
There’s a lot of misinformation, a lot of misunderstanding regarding what services do. For instance, about the law on intelligence services. There is an impression that services want to collect as much data as they can (so-called bulk data). As a colleague of mine stated this week in his oration at the University of Utrecht: services suffer from “data hunger”. I think that’s a misunderstanding because the more data you have, the more difficult it becomes to see what is going on. You need smaller details to figure out where the threat is luring, what actors are involved, what the targets are etcetera. That’s one of the main mistakes. They think that we have services that want to know all about everyone and everything. That’s not true. Analysis is just focusing on where the threat really is. The American NSA mainly contributed to this misunderstanding. In their project, they tried to gather as much information that they could. By the way: without any effect or result. Now everyone thinks that every service works in this manner. That is not correct.

In the next part we discuss Dr. Abels’s new book on Intelligence Leadership: ‘Spionkoppen’, the Dutch perspective, future threats and challenges to conclude with some words of wisdom on the validity of sources and information.