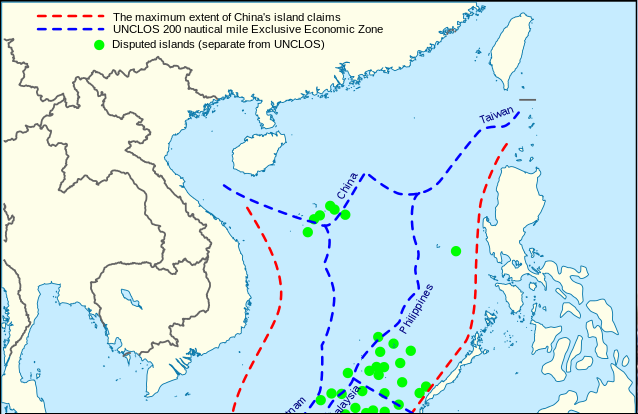 This past week the South China Sea maritime disputes regained public attention when China’s Foreign Minister Wang Yi declared that the People’s Republic of China (PRC) expects Japan to comply with the 1943 Cairo Declaration and the 1945 Potsdam Treaty and return the Chinese territory it took during the war, including the Nansha Islands. With no foreseeable solution ahead, the disputes are far from being settled: bilateral and multilateral mechanisms have failed, and so has the decision issued by the Permanent Court of Arbitration (PCA) deemed by Beijing as “null and void and has no binding effect on China.”

The contemporary territorial disputes in the South China Sea are traceable to the 1951 San Francisco Treaty which failed to address the sovereignty issue regarding a chain of 200 islets, coral reefs and sea donuts that constitute the Spratly Islands or Nansha Islands covering approximately 250,000 square kilometers, including an ample continental shelf, potentially rich in natural oil and gas. Under Chapter II of the Treaty, “Japan renounces all right, title and claim to the Spratly Islands and to the Paracel Islands”, provision further reinforced by Article 2 in the Treaty of Taipei of 1952. Nevertheless, these treaty provisions equal a territorial renunciation, not cession, thus not necessarily an attribution of sovereignty to the PRC, to Taiwan or to any of the four ASEAN contenders which joined the dispute in the 1970s. True, the 1943 Cairo Declaration invoked by Yi demands that “that all the territories Japan has stolen from the Chinese (…) shall be restored to the Republic of China”, while the 1945 Potsdam Declaration, Article 8, reiterates the same terms and limits Japanese sovereignty to a predefined set of islands. But, the lex posterioris rule according to which a later law repeals an earlier law, frees Japan from any duty as imposed by the Chinese. As a matter of fact the San Francisco Treaty refers to the Potsdam Declaration, but requires that only Article 9 dealing with the return of Japanese military forces to their homes to be carried out.

If not esoteric, the question of what international law means to China, and how China wants to employ it and interpret it, is worth a reflection. In the decades during which the Chinese government under the leadership of the Chinese Communist Party was developing its perspectives on international law, China was a middling power with significant security concerns directed at the maritime domain and the areas of friction between it and the United States as the dominant global power. In an effort to reap the benefits of compliance, China accepted as much of the international law norms as it could without compromising what it believed to be its vital interests. Similarly, as it emerged as a rising global power, China has also cooperated extensively without compromising its interests. Despite these efforts, the country has failed to fulfill the implementation of international law and norms based on the belief that this system favors dominant global powers while disadvantaging China. The PRC uses the language of international law to justify its claims and its right to use power to pursue them, selectively and opportunistically, as in the declaration issued by Wang Yi. Regrettably, so far, China has chosen not to formally conform its claims to relevant international law or to use international legal mechanisms to help resolve its maritime disputes with neighboring states. Thus, current operationalization of China’s strategy includes the use of power and even low levels of force, but not international law or its institutional mechanisms. With regards to the South China Sea disputes, China showed constant unwillingness to shed light on its position under international law, or understanding of it. Beijing specifically denotes the nine-dashed line to be an undefined boundary in its domestic maps and a provisional one in its international filings. No office or ministry has ever published a law or decree giving the line a legal personality.

China has already faced a number of challenges, if not damages. To begin with, China’s continuing shortcomings in reaching a negotiated settlement with its neighbors has exposed the country to international litigation, making Beijing lose the strategic initiative encompassing combined strategy of diplomatic stalling. Second, the PRC is in serious disadvantage because several Chinese assertions about their South China Sea rights have not survived the scrutiny of international law and of the PCA, losing even the illusive legal credibility for some of its important maritime claims. China is faced with the embarrassment of the formal international rejection of its claims and a clear reinforcement of the rules and norms concerning rights and obligations at sea that UNCLOS and international maritime law establish. The continued failure to participate in the process and the decision to ignore the unfavorable results, could be interpreted as a signal from Beijing that no amount of international disapproval will sway its position on the matter. In the future, this attitude could encourage others in the region and beyond to enhance coercive capacity and engage in accelerated balancing activities in order to reinforce their claim strength and their overall security in the face of a more powerful China.

But, every nation must try to advance its position as much as possible in the eyes of the law. China is placed in a dilemma from which it cannot extricate itself except by complying with the law. The only way to realize one’s national interest in a stable international environment is to utilize, develop, and comply with international law. The behavior of the PRC is no more questionable than that of other global powers, that, in sought of prestige and assertiveness break international law and avoid compliance with its norms. As one scholar put it “the law and politics create their own particular pictures of reality (…), sometimes they overlap, and sometimes they differ, more or less strongly.”