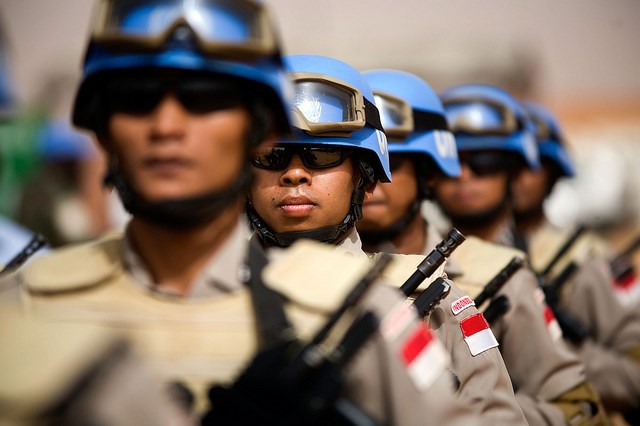 Will Indonesia continue to step up its engagement in UN peace operations, and fulfil its potential as an emerging country in the realm of peace operations, or will the country be engrossed with internal conflicts, and lose credibility as a UN troop contributing country? This article is an edited version of Roderick’s Bachelor thesis on Indonesia and the UN.

There has been a striking decline in the proportion of troops provided to UN missions by Western states (See Figure 1). Concurrently, states that have traditionally been cautious, or sceptical of, peacekeeping operations have currently come to play a larger role in peace operations. Indonesia, the world’s third largest democracy, Southeast Asia’s biggest economy, and the world’s largest Muslim majority country, is one of such states. The most important factors influencing Indonesia’s increasing engagement are, first, peace operations allows Indonesia to reassign missions to its armed forces. Second, UN peace operations are seen as a means to enhance the legitimacy and the fostering of a positive and ‘democratic’ international image. Third, peace operations are considered as a way to consolidate cooperation with important international and regional partners. Fourth, Indonesia regards peace operations as a means of capacity building of its National Armed Forces.

A New Player in the Realm of UN Peace Operations

According to the Stockholm International Peace Research Institute (SIPRI) Indonesia is- along with Brazil and China- one of peacekeeping’s “new players”.[1] Indonesia’s role as peacekeeper and as a contributor to peace operations on the global stage has increased substantially over the past years. (See Figure 2)

In 2000, while being in the midst of an economic and political crisis, and subjected to the installation of an UN-authorized force in East-Timor, [1] Indonesia merely deployed 44 troops to peace operations internationally. Currently, Indonesia contributes a total of 2,854 troops to 10 UN missions on 3 continents [2], making it the world’s 12th largest, Asia’s 6th largest, and the largest troop contributor to peace operations in the Association of Southeast Asian Nations’ (ASEAN).[3] In early 2015, the Indonesian government pledged to reach the UN’s top 10 contributor list with 4,000 troops deployed by 2019. [4] So why has Indonesia stepped up its engagement in UN peace operations?

Why is Indonesia Engaged in UN Peace Operations?

Indonesia views UN peace operations as a viable way to pursue regional and global roles on the world stage. This coincides with Indonesia’straditional foreign policy guideline, which is bebas dan aktif (free and active). [2] The foreign policy pursued by Indonesia seeks to, first, “avoid the meddling of external powers, and anchor the country’s independence in a non-aligned strategy.”[5] Second, the doctrine implies that Indonesia should adopt an active stance in the international system, and “establish itself as a driver in international affairs.”[6] These same principles are guiding Indonesia in making the decision to increase its engagement in UN peace operations, through which Jakarta seeks to establish itself as a legitimate, and democratic player in the international system.

Indonesia’s engagement in UN peace operations reflect that Indonesia is indeed playing a larger role regionally and globally, and also it shows that it wants to project an image of democracy, development, and a dedication to international law on the international stage. However, domestically, Indonesia is going through turbulent times. Several Indicators over recent years show that there is rising religious intolerance in the world’s largest Muslim-majority country, including mounting discrimination against religious minorities, the latest example being the Jakarta governor Ahok blasphemy trial.[7] Furthermore, there is growing tension between Jakarta, and the secessionist movement in West-Papua. It could be argued that the West-Papua issue has tarnished Indonesia’s credibility and democratic image globally.

Roderick T.J. Buiskool holds a Bachelor of Arts from the University of Groningen where he studied International Relations and Organization. He is currently doing an internship at the United Nations Fund for Population Activities (UNFPA) in Dili, Timor-Leste.

1.East Timor was a Portuguese colony from 1702 until November 1975. The Revolutionary Front for an Independent East Timor (FRETILIN) declared the territory’s independence when the Portuguese left. Nine days later, Indonesia invaded East Timor and subsequently declared it its 27th province. The Indonesian occupation of East Timor was characterised by a highly violent, decades-long conflict between separatist groups (especially FRETILIN) and the Indonesian military.

2.This doctrine was coined by then-Vice President Muhammad Hatta in 1948 to respond to the bipolar world order in the Cold-War era. The doctrine has remained the foundation of Indonesian foreign policy ever since.