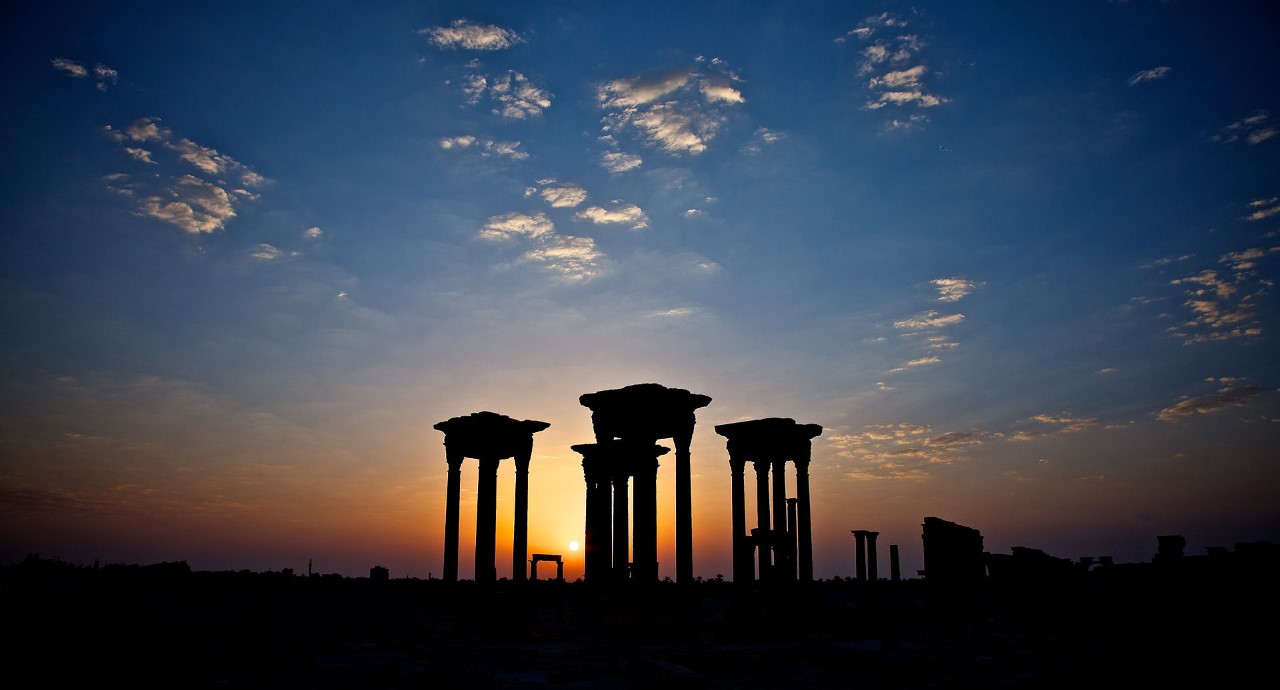 The Strategic Use of Cultural Heritage on a Global Stage

The destruction of cultural heritage in conflict areas has been a recurring theme throughout history. In modern conflicts, which are characterized by more complex, asymmetrical warfare, our ideas of these destructions have been challenged. Terrorist groups nowadays do not only intend to destroy these symbols of identity, but place these destructions within their ‘global propaganda’ strategy of shock and awe.

Cultural heritage is an important element of identity formation. Since architectural constructions – for instance libraries, churches, mosques and cemeteries – can stand the test of time, they physically embody memories of former generations. However, history has shown that the intentional, often symbolic destruction of cultural property is a continuous act of warfare. The Reich Kristallnacht in November 1938, the destruction of the Old Bridge of Mostar during the Balkan War in 1993 as well as the 9/11 attacks in New York can all be seen as case studies of the same phenomenon. Political discussions that deal with this topic often focus on the legal dimension of punishment and preservation. However, one other problem is less researched: what are the precise motivations behind these destructions?

New wars, and the importance of (sub)identities

Most conflicts during the earlier decades of the twentieth century were characterized by a clear overview of warring parties. This changed at the end of the twentieth century; conflicts between states moved to conflicts within states, classified by Mary Kaldor as ‘new (civil) wars’. More often, national insurgency groups challenged the political leadership of their own state. During these conflicts, identity was of crucial importance. Because the individual actors were not always looking for a specific political or economic goal, and just as much empowered by ideological, ethnic or religious divisions, identity created a cornerstone of political mobilisation. This mobilisation required a clear framing of the enemy, that eventually justified violence as the only logical solution.

This is the point where cultural heritage gets important. In these new wars, where identity serves as a catalyst, violence does not limit itself to physical confrontations. The destruction of symbolism attacks the feeling of continuity, national cohesion and democratic governance. Therefore, the destruction of cultural property serves both a contemporary goal, the intimidation of the enemy, as well as a historical goal,  the ‘destruction of memory’ that burdens future generations, who are limited in their ability to connect and reconstruct their cultural history.

Terrorists have made the destruction of cultural heritage an important part of their international strategy. Religious fundamentalist violence by groups such as Al-Qaeda and IS connects identity to the global level through transnational linkages of kinship and new digital technologies. Violence takes place on a regional level, but transcends that same region by spreading fear to a larger, not physically connected crowd. As a result, the destruction of cultural heritage becomes multivocal: the same message of destruction communicates different information to different audiences. A video of a beheading can both attract allies and repulse enemies.

Following this reasoning, videos that show the destruction of cultural heritage serve the same purpose as videos displaying human violence. In many short, mostly grainy recordings, the leaders of these terrorist organisations justify their destructions as purifications in name of the Islamic faith. At the same time, heritage is a useful global target, since it also touches upon internationally shared feelings of ancestry. By destroying pieces of history that are centuries old, terrorists enrage the international community but also show the lack capability of that same community to act against it. This intentional display of destruction by religious fundamentalist groups is part of what Claire Smith calls ‘global propaganda’.

Cultural heritage in the MENA-region is a useful target, since these temples, churches and embody internationally shared feelings of ancestry. The multivocal processes were shown in 2001, when the Taliban blew up two 30 meter high Buddhist statues in the Bamiyan valley between Afghanistan and Pakistan. The internationally acclaimed pieces of architecture were, according to the Taliban, destroyed because of their non-Islamic nature. This destruction was a precursor for the violent politics that would terrorise the region in the years after. Surprisingly, Western journalist were invited to report live on the destruction by leaders of the Taliban. Again, this shows that the global impact of destructions is an important element of the framing campaign. By targeting statues that have an international character, the resonance of the destruction exceeds the borders of regional/national identity.

Conclusion: an urgent call for a more complex view

The biggest effects of digital media is the fast distribution, repetition and generalisation of narratives. Terrorism, with its specific global propaganda of shock, awe and fear, paradoxically reiterates the belief that all acts of violence in the MENA-region are related to the Islamic ideology. To conclude from this article, the destruction of cultural heritage very well fits this story. Terrorists use the imagery of cultural heritage destruction because they anticipate the reaction. It almost works like a reinforcing cycle: the destructions lead to shock; the shock leads to anger against the terrorists, that showcases itself in essentialist claims of the Islam; this angers Muslims who as an answer join terrorist organisations that later on use that same destruction technique again. It is important to break that cycle, and recognise that although the global propaganda of cultural heritage destruction is working, it needs to be challenged as part of more intense efforts to safeguard these treasures of history. m