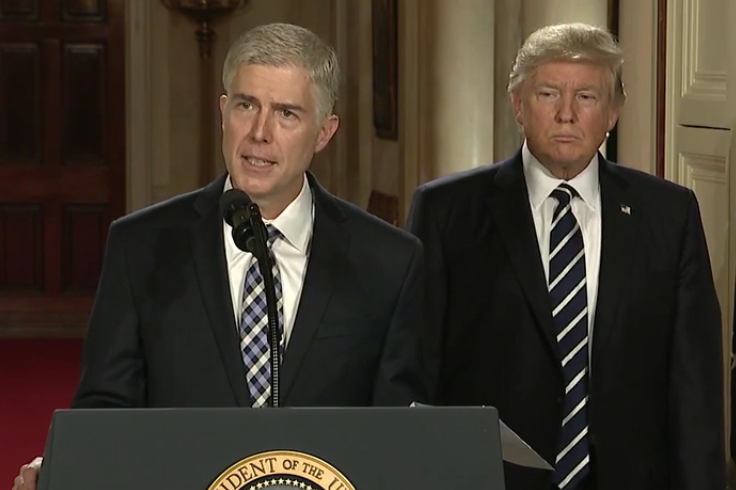 In February 2016, Associate Justice to the Supreme Court of the United States (SCOTUS) Antonin Scalia passed away. With his death, a seat opened up in the highest federal court of the country, which normally consists of nine justices (eight associate and one chief justice). It is the sitting president’s job to pick a nominee which the Senate then confirms. Who the SCOTUS justices are is especially important because they are appointed for life—unless they resign, retire or are impeached.

After Scalia died, Republicans blocked then-President Obama’s nominee Merrick Garland for the full remainder of his tenure to prevent a left-leaning ideological shift. Senate Republicans refused to hold hearings for Garland, effectively blocking his appointment. Initially, the Republican party claimed Obama was not entitled to choose a new justice because he had only a year left in the Oval office. They said the next president should be the one appointing a new justice. Later, probably nervous about Trump’s perceived chances of winning the election, they proclaimed they would continue to block any Supreme Court nominee put forward by any Democratic president, no matter who the nominee was.

TYRANNY OF THE MASSES

On January 31, 2017, President Trump named Neil Gorsuch to fill the seat left vacant after Scalia’s death. Although many—on both sides of the political spectrum—claim Gorsuch is capable and qualified for the job, Democrats should oppose his appointment. After all, this seat was stolen from the Obama administration. The way the Democratic Party can obstruct, or at the very least delay, Gorsuch’ appointment is through a filibuster.

The word filibuster is derived from an old Dutch word for pirate: vrijbuiter. The term, to describe efforts in the Senate to prevent a vote on proposed legislation, was first used in 1837. Since a change in law in 1806, an individual senator—or a few senators consecutively—are allowed to speak for an unlimited amount of time on the grounds that “any senator should have the right to speak as long as necessary on any issue.” [1] The underlying idea is that the opposition party can continue the debate long enough so that the majority of senators might agree to amend the proposed legislation. Filibustering allows for minority opinions to be expressed, avoiding a tyranny of the masses, or a mob rule.

Filibusters were frequently used when Southern senators attempted to hinder civil rights legislation. The longest individual speech to date was performed by South Carolina senator J. Strom Thurmond, who filibustered against the Civil Rights Act of 1957. He spoke for an impressive 24 hours and 18 minutes straight. Together with his supporters in the Senate, they managed to block the bill by talking for 57 days in a row. Some of the senators folded in the end, leading to a successful cloture vote.

Talking for a prolonged period of time is not required for a filibuster in every case. When the opposing party has more than 40 senators on its side, it does not need to continuously keep on talking. They simply need to inform the majority party they would need a cloture vote. The majority is able to remove the filibuster in a move called the nuclear option. When a party goes nuclear, it means filibusters can no longer be used under similar circumstances in the future.

Although filibusters can be a source of great frustration to senators on the receiving end, the nuclear option is rarely used, because most senators are reluctant to give up their own ability to use this political tool. There is justified criticism to the use of filibusters in that it undermines democracy by allowing a minority to dictate to the majority. In addition, it wastes valuable floor time in the Senate. However, sometimes the means justify the end. With a Republican President and a majority-Republican Senate, the filibuster is the only power Democrats currently hold.

Importantly, the notion that Republicans would do anything in their power to block any SCOTUS nominee put forward by any democratic president is not a mere theory. Soon after Scalia’s death, Senate Intelligence Committee Chairman Richard Burr claimed that “if Hillary becomes president, I’m going to do everything I can do to make sure that four years from now, we’re still going to have an opening on the Supreme Court.” [2]

Senator John McCain agreed: “I promise you that we will be united against any Supreme Court nominee that Hillary Clinton, if she were president, would put up. I promise you.” Ted Cruz was a bit more cautious, suggesting he would “debate” with his colleagues about the issue if Clinton would win the election. In any case, until the next president is sworn in “eight justices will suffice.” [3] Republicans are effectively saying they alone should hold the power to appoint SCOTUS justices.

When the opposing party shows this level of disregard and lack of respect for the law and the constitution, there is no sense in continuing to be polite and goody-goody. Even though the chances of winning may be slim, Democrats need to stick up for what is right and oppose any SCOTUS other than Garland: the nominee rightfully and lawfully appointed by then-President Obama.