ERDOGAN’S NEW USE OF HISTORY; CONSTRUCTING A NEW TURKISH PAST ON THE FOUNDATION OF A ‘GLORIOUS’ OTTOMAN LEGACY 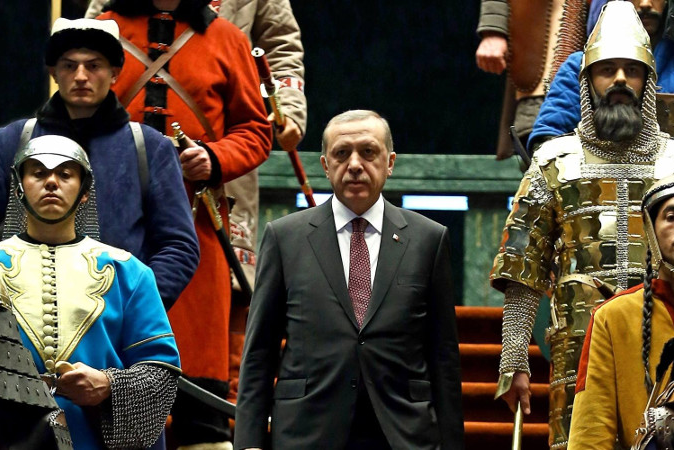 When standing in front of thousands of people in Istanbul celebrating the anniversary of the Ottoman conquest of Constantinople on May 30, 2015, The Turkish president Recep Tayyip Erdogan referred back to the moment of his election as mayor of Istanbul in 1994. His subsequent tenure, he stated, ‘was to serve Istanbul and the legacy of the Sultan Mehmed the Conqueror. The conquest is to make Turkey stand up on its feet again.’ ‘He is the army, he is the commander,’ the crowd then yelled. In this article, I will try to argue that these words by the president are part of a broader pursuit by the Turkish state to revive its Ottoman legacy and regard it with pride.

Another example of this attempt follows: when Turkish soldiers crossed the Syrian border in February 2015, the state claimed it had to protect the tomb of Suleyman Shah, who is considered to be the founder of the Ottoman Empire. This action sparked a sense of pride among the Turks, as they monopolized the Ottoman heritage and portrayed themselves as its defenders. But why would Erdogan try to revive the Ottoman history? And why would he stress its greatness?

In all societies on earth, people draw on shared history, whether the society is literate or not. Therefore, referring back to the past is to be considered ‘logical’. Yet the question remains why Erdogan would stress the glory of the Ottoman Empire in particular. Why, for instance, did Erdogan not emphasize the prosperity during the period in which Atatürk’s reigned?

The way in which the Turks regard their Ottoman legacy varies from time to time. To illustrate this point, let us consider a switch that occurred in the view of Ottoman heritage when Erdogan was elected president in 2014. Whereas up to that point, discourse focused on the failures and shortcomings of the Ottoman system in the period of its decline (as opposed to the prosperity in ‘glorious Atatürk times’), Erdogan increasingly focused on stressing the euphoric moments the empire had experienced, such as the capture of Constantinople in 1453.

This different view of Ottoman legacy, I would argue, reflects a broader development in Turkey, wherein Erdogan increasingly pushes the country towards the East, thereby actively fostering Islamization. Indeed, Atatürk, with his secular laws, was honored in times when Turkey oriented itself on the West. Then, when Turkey switched its course, more attention was paid to the Ottoman Empire and its greatness. Of course, I do not intend to argue that Atatürk is now reduced to the periphery of either scholarly or public attention in Turkey. Yet a clear shift in discourse may be observed from around the moment of Erdogan’s presidential inauguration.

In short, the changing dynamics of Turkey’s international political orientation have paved the way for Erdogan’s new use of history, in which the Turks proudly deem the Ottomans to be their ancestors. This ‘neo-ottomanism’ contributed to the emergence of a new (Islamist) Turkish identity. This new use of history might look innocent, but can be dangerous, for instance when it is used to justify Turkish interventionism (as in the case of the tomb of Suleyman). Furthermore, historiography, which often pretends to be objective and universal, can be slightly altered or selectively consulted by the Turkish state apparatus, in order to serve the needs of the latter. Therefore, historians need to be aware of the way in which Turkey seeks to construct its identity while using its history and to be critical when the authenticity of the past is challenged.

Maarten Lemmens is a student of history at the University of Amsterdam (UvA) and specializes in the subject of European Nationalism.