ELECTIONS AND JOURNALISM IN A DIVIDED AMERICA: AN INTERVIEW WITH NOS CORRESPONDENT WOUTER ZWART 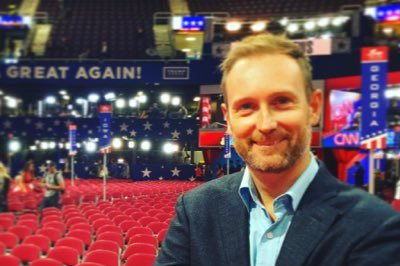 This interview will appear in the upcoming edition of JASON Magazine, which is all about the US Elections. Make sure you do not miss it!

In an exclusive interview for our American Election Special journalist and NOS correspondent in the United States Wouter Zwart was kind enough to enlighten us with his views on the presidential campaign and the role of the US media in the polarization of American society. Also we touched upon the changing role of journalists in the social media era and its effect on politics.

To start off, what did you think of the first debate?

Four years ago I experienced my first presidential debate here in the United States right before I took over for my colleague Eelco Bosch van Rosenthal. The contrasts with 2016 are enormous. Not only because the two candidates are completely different and not only because these are probably the most hated politicians in the country but also because the times have changed rapidly. We live in a time of 140 characters, of lightening communication. Debates have become awkward, an anomaly, in this age. We no longer take the time to listen to each other, to talk for 90 minutes about the most the subjects that are important to us. It was not really a debate. While one candidate tried to explain problems and tackle them through proposed policy ideas, the other spewed short one-liners without any clarification. It was entertaining but also awkward to watch.

I became a correspondent to provide the public with analyses on events, to explain the how and why of a phenomenon, to explain the reasons behind a development.. However journalism in this age has shifted more and more towards being only a messenger of fast-spewed rhetoric and sensationalism, which is a dangerous development. Luckily the NOS still gives us the room to analyze the why but we also notice this shift in our work.

Journalists are being trapped in a almost paparazzi kind of style of reporting, being expected to report on every juicy detail?

People ask us to report the situation to them but also to explain it. And we have to compete with Twitter. When bombs go off in New York maybe you’ll know about it faster than I through social media. This is how fast news goes these days. We are then expected to give a explanation on the bombing on the moment it happens, preferably even before it happens, this is difficult.

Because you’re a correspondent you have a wide social circle here. How do people perceive the shift fact-free politics? Are they concerned or also enticed by such rhetoric?

Yes, but there is a divide. In the more educated communities of America there is a concern that they are losing their grip on politics. That their analyses of more than five paragraphs are no longer being read. On the hand, and we have to honest about that too, a large portion, also in the Netherlands, who felt they could not participate in the debate because it was either too complicated or too elite, now feel that they do have a voice through internet, through Twitter. Sometimes it is not always not as nuanced but it is a way for them to express themselves. We can be negative about that but it gives them the opportunity to voice their opinion.

They are being used but that is not something new in politics. This dissatisfaction is being used right now. Let’s not forget that fear is the most important tool to force people to the voting booth and there is now an opportunity to exploit that fear. But the Republican leadership is very uncomfortable with Donald Trump because he stampedes on some traditional Republican values. He is not really a conservative, he has some very leftish ideas, much like Geert Wilders in the Netherlands. However since Trump draws so many voters to him, Republicans are being opportunistic. They fear that they stand to lose not only the presidency but also the Senate, which is important since it decides the successor of the late Justice Antonin Scalia, who was a conservative. They feel that their values are being further undermined if they lose.

On the NOS website you said In China you experienced the rise of a world power. Do you see the opposite in the US, a world power in decline?

I think there are two realities. One, America is not doing badly at all. The economy is growing again and crime is going down as well. Incomes have risen for the first time and poverty is declining, even if many people don’t see it. But then there is the reality of sentiment and people are still scared of what happened during the economic collapse in 2008 and of the growing inequality. But also about what America’s position in the world should be against a more aggressive Russia. Republicans saw Obama’s more cautionary foreign policy as something they could exploit, portraying him as weak and indecisive, an image that resonated with people. and there are people, even though it is not entirely true, who wonder if America’s best days are behind it.

“America is always losing” is Trump favorite sentence when talking about international trade deals. And recently also Clinton is no longer in favor of the new TPP (Trans-Pacific Partnership). Globalism as something that squeezes America, where does that idea come from?

The economic crisis that is almost a one-on-one connection. it is something that has set in the minds of people. And there is no denying that in some parts in the US, such as the Rust Belt and Coal Country [1] are in very bad shape economically and where many people lean towards Donald Trump, certainly on his economic perspective. And he has a point, there is a part of America that feels neglected. Not only because of 2008 economic meltdown, in which president Obama had no role, but also because of the War on Coal and Oil which he definitely started. And Hillary Clinton who in a campaign speech propagating renewable energy clumsily stated “we’re going to put a lot of coal miners and coal companies out of business/”[2] Of course these people are not against NAFTA or TPP, many are not even interested in those deals but they are scared of losing their jobs and that is being used by politicians.

A lot of the manufacturing industry has left the Mid-West and cities like Chicago and Detroit are shrinking and are poorer. Those people feel left behind.

Yes, and that is something politicians should do something about. However journalists, we are sometimes also guilty of doing it, romanticize the idea of desolate cities in the Mid-West as the symbol of America’s downfall. While in Silicon Valley an even larger economic power is stronger than ever. I certainly do not wish to play down the problems in the Rust Belt but we tend to romanticize the image. the auto-industry is largely saved. But those optics are heartily being used by politicians and the media.

The media and politics in America have become more interwoven. Trump has Fox News and Clinton CNN. Is the polarization in the US so deeply rooted that people no longer meet each other even on cable news?

Well Fox News in a number of programs has appointed Clinton as winner of the debate. Also because Fox is quite harsh on Trump, especially the editors. But what we constantly notice when we interview people is that they almost never watch the ‘other side’s’ news. Its unbelievable, on both sides, how badly informed they are about the other side. People are no longer interested to be broadly informed and are unwilling to empathize with people from the other side of the political spectrum.

There is only a small group that can still be swayed and they are undecided about voting at all. They have to energized to come out and vote and in that regard Trump hurt himself by being so disruptive in that first debate.

The American media is no longer interested in giving their viewers an objective analysis but are searching for conflict. Is that also why there are so many controversial people in politics, because they do well on TV?

Yes it is all interwoven. Firstly all major American news outlets are owned by large companies which have high political and financial stakes. The best example may not be political but when MH370 suddenly disappeared CNN reported non-stop on the tragedy. Ratings soared and the board demanded that the network only cover the lost plane, forbidding reporting on other topics, driving its journalists mad.

One more thing about the media. The fact that so few Americans are actually interviewed through journalist’ reports is ultimate proof that the media is no longer interested to inform its people but to represent political and business and interests. It is repulsive. And European media is slowly moving in that direction. More and more we focus on conflict and opinions. I find it astonishing that an average Dutch newspaper has seven or eight columns. Its opinion journalism, one thing happens and every media outlets want to vent its opinion. It’s completely unnecessary.

Turning to foreign policy, this election NATO and America’s bases in allied countries are suddenly being drawn into the debate. How does the public perceive these topics, do they resonate?

American do not pay a lot of attention to these subjects actually. The whole idea of NATO is not really an issue since it perceived as an organization that is led by the US. It also the way Trump talks about it. America decides what the organization should do and no one else. It is not really an issue because there are no large military operation with American soldiers. This could change if an Article 5 clause should into play or if the crisis in Syria expands any further. But at the moment it is not a big issue among Americans.

Do you think that Clinton, who is an expert on the Middle East, will put her focus on the region or try to follow Obama’s Pacific Pivot?

As the former correspondent in China I dare to say that the Pacific Pivot is a failure. The strategy to form a bloc against China with the Asian partners died in political struggle. China can expand its power in relative peace, such as its navy bases in the South Chinese Sea while America’s Asian partners feel neglected.

With the revival of the Islamic terrorist threat, China has disappeared from the minds for most Americans and doesn’t play a role in politics anymore. This is worrisome. The military but also economical developments of China and Russia should play a large role in the debate in the United States but they do not. We should be more concerned of the future role this region is going to play in global politics and the United States should be ready for that.

After completing the School voor Journalistiek in Utrecht Wouter Zwart started his career as a reporter. In 1999 he joined the foreign department of the NOS and in 2006 became known to the wider public as the NOS correspondent in China. In 2012 he succeeded Eelco Bosch van Rosenthal as the NOS correspondent in the United States, where he works together with Arjen van de Horst.

[1]The Rust Belt is the term for the region of the upper North-Eastern United States, the GreatLakes, and the Midwest States. [1]