We Are at the Eleventh Hour in Repelling Transnational Organised Drug Networks: Countering Cocaine Trade in Western Europe 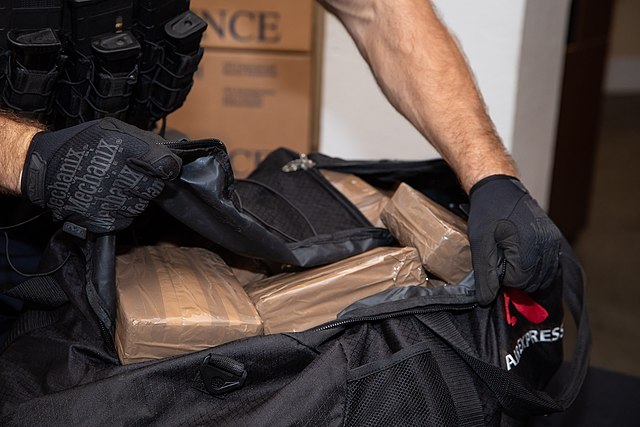 In an age when the speed of information can often outstrip the speed of verification, the COVID-19 pandemic has taught us that it is crucial to cut through the noise and focus on facts, a lesson that we must heed in order to protect societies from the impact of drugs (UNODC, 2021)

Drugs affect everybody, one way or another. Some are highly aware of this, others not at all. As a result of drugs impacting societies at large – with or without common conscience – governments have increased efforts to tackle organised criminal networks involved in drugs business. This so-called ‘War on Drugs’, is very much like the ‘War on Terror’; it is a costly, vast, and extraordinarily difficult undertaking. Although the United States has been the primary export market for cocaine, West European harbours are turning into a 1980s Miami. A similar drug business which scourged Miami forty years ago (with visible aftershocks to this day) has now reached Europe’s shores. The corollaries of contemporary drug trade undermine the very foundations on which our societies are built. Money earned in this lucrative business is increasingly invested (and laundered) in legal goods, services, and companies. This uncontrollable and dangerous amalgamation of the criminal world and the legal society includes, but is definitely not limited to, investments in real estate subsequently used to generate a legal income stream, purchasing of bars, restaurants or sports clubs to launder money, corrupting and murdering of lawyers and notaries, and mass-scale tax evasion. Despite counterefforts, the battle in its current shape and form is an unfeasible endeavour – but giving up is no alternative either.

The dominant approach of battling drugs as a public health issue and crime catalyst finds its roots in President Nixon’s America, with 2021 marking the 50th anniversary of the ‘War on Drugs’. Starting in the 1970s, an assortment of policies was implemented with several main targets: warding off illegal drug production, supply, and consumption, as well as issuing treatment and increase prevention [1]. Through globalisation and subsequent increasingly transnational drug trade, the ‘War on Drugs’ internationalised. Fast-forward to today, the drug trade business is extremely well-organised, highly lucrative, and its focal point moved to Europe.

For transportation into Europe and beyond, Western European coastal regions form a crucial gateway for drug import and export. Through ingenious ways, cocaine started arriving in bulk and the business quickly began to grow exponentially. Moreover, the Netherlands and Belgium are also home to the production of synthetic drugs such as ecstasy and speed which are exported across the globe. The two states play a pivotal role as a global hub for drug trade as both transit and export countries. Their infrastructure, connectivity, favourable laws, and the general commercial spirit additionally serve as a magnet for transnational drug trade.

Zooming in on the cocaine trade, the sheer size of the industry (estimated total value of 9.068,96 million in 2017) impacts and undermines societies at large [2]. Cocaine also disproportionately affects marginalised and vulnerable people. The various enabling factors such as infrastructure and local production leads to residents of poverty-stricken areas easily getting entangled in drug trade. Compounding the existing problems is the fact that those with lower incomes tend to get addicted to illegal substances more easily [3]. Moreover, drug money injects societies with cash used by criminals to gain foothold through buying up real estate. Real estate may be used for criminal activities, as a money laundering instrument, or to slowly generate streams of legal income. This directly undermines the legal economy. Oftentimes these illegal activities run in parallel with legal commerce, complicating the singling out of those involved in illicit activities. These multi-layered circumstances facilitate a mushrooming of illegal companies as a result. Think of luxury car dealers, companies selling encrypted phones to be used for communication within and between criminal networks, or transport and logistics firms to convey drugs – hidden between legal goods – from entry points to destinations across continental Europe. Essentially a self-reinforcing mechanism, drug money becomes deeper and deeper embedded in society.

The surge in undermining developments revolve around the growing attractiveness and favouring of Europe over the US as an outlet for cocaine. A 2021 report claims the price of one kilogram of cocaine in the U.S. to be around $28.000, while being valued at $40.000-$80.000 in Europe, depending on the country [4]. This goes hand in hand with a demand increase for cocaine in Europe, perpetuating the trade destructive for both human health and the environment. Time and again, governments have attempted to dismember criminal networks involved in the cocaine business. However, decades of retrospectively ineffective policies and lax action against the drugs business has diversified the involved parties. These entities are now deeply embedded into societies and communities operating in a seemingly organised chaos. Offensive violence is consequently on the rise as well [5]. Personnel is in no shortage of supply either with voids quickly filled up as in any other lubricated supply chain. The current situation resembles an ever-expanding cobweb which is deeply ingrained in society. Solely increasing penalties – as is regularly done – is therefore an ineffective instrument on its own.

Although seemingly distant for some, the cocaine-induced trouble can be directly observed: undermining of the (legal) order, addiction, widespread violence between rivalling groups, corruption at all levels, and government budgets being diverted to battling drug trade. These include just a few examples but raise numerous questions. Perhaps most importantly, what is the solution? Can the drug problem be eradicated from society? And if not, what does the future hold? The Netherlands has even been referred to as a “narco-state” by some, illustrating the extent to which drugs dominate different parts of society [6]. Not all legitimate institutions are controlled by drug wealth, but it penetrates most to various degrees. Furthermore, the labelling of the Netherlands as a narco-state implies a certain direction the country is headed in.

As transnational drug trading networks continue to penetrate society, European economies – predominantly in the Netherlands and Belgium – have been warped by drug money. Despite deep societal embedment of drugs, several policies may offer recourse and mitigate the effect of perverse drug policies. Although sometimes a seemingly endless battle, learning from past experiences leads to development of new strategies. Upholding both legitimacy and governmental authority as well as the inclusion of all societal groups to prevent further exclusion of those already in the grip of criminals is paramount; not just acknowledging this but actively taking steps in this regard is required.

Spread across the continent, Europe enjoys numerous different policies for drug use, production, and trade. This diversity should be embraced and learnt from rather than seen as an obstacle. Today one coherent controlling framework is lacking and would require using the same definitions and data collection methods, including sharing of results. Europol can serve as a facilitative platform. While the US enjoys considerable presence in Latin American countries in which cocaine originates, European countries lack liaisons and attachés in Latin America [7]. This impedes tackling the problem directly at its roots. Using the structures of intelligence-sharing in place, for instance via Europol, would unite the governments of source, transit, and destination countries. Using this to identify intervention and focus points is imperative for drug trade has distorting, multidimensional effects on European countries. The contemporary growth of European criminal networks are the infants of this neglect.

‘Follow the money’-type of investigations into high profile individuals are another worthwhile avenue of resolve. Despite some minimally efficacious counterefforts, criminals continue to find ingenious ways to hide money through offshore accounts, shell companies, or the hawala banking system. These act as getaway vehicles for criminal money. However, proper methods to tackle offshore companies are lacking as are coherent policies to follow digital money traces despite existing tools to do so. Well-functioning methods are a prerequisite to thwart money laundering directly tied to drug crime. Time and again national banks, tax authorities, and notaries are caught not reporting unusual transactions. Confiscating houses, cars, or other expensive items linked to drug criminals as well as monitoring people purchasing thousands of euros worth of booze in high-end clubs should not be the sole focus of contemporary policies. Throwing money around and flaunting is merely the tip of the iceberg and tackling it will not foil criminals engaged in illicit drug trafficking. The real profit is hidden in deeper trenches elsewhere. More resources should be diverted into following money trails leading to criminal leadership. This requires both upscaling in financial (forensics) teams and cybercrime units, potentially through public-private partnerships and the issuing of investigatory licenses. Tax authorities and notaries must be more strictly held accountable for not reporting unusual or suspicious monetary activity.

Although several other policies can be proposed, the important takeaway here is that a multifaceted and consistent approach is required to stagnate the current growth of cocaine trade in Europe and subsequent undermining effects.

Conveying the impression that drugs – in whichever fashion – can be eradicated from societies is a false pretence. But it does not have to be discouraging as such. Embracing that no realistic option of full eradication exists, leads to other venues. Some (perceived) losses must be accepted to resolve the issue and direct focus to that most impactful. In no possible way can every single freight container entering West European harbours be inspected for hidden cocaine. Neither can corruption within customs units be entirely eradicated.

Rather, resources can be invested worthwhile new avenues such as ‘following the money’ to ultimately take out those responsible for the substances ending up in those containers in the first place. Mitigation rather than eradication must be the core focus of law enforcement and governments. Taking heed of this, tangible policies can be drafted to counter drug-related violence, money laundering, and corruption. This calls for taking active steps instead of favouring passive defence and do away with inconsistent policies. Treating the issue as purely one of crime is long-overdue. All of society is now facing the undermining effects of drugs. This necessitates scrupulous and consistent regulation, putting governments back in control. Repression in this realm, however, must be avoided. In recovering control, more resources and manpower must be diverted to financial forensics including in the cryptocurrency domain. Contrary to the common belief of complete anonymity, tools which can trail cryptocurrency wallets exist. International cooperation is vital for this. Likewise, transnational intelligence-sharing and other forms of law enforcement cooperation add to identifying possible points of intervention. Police units in Western European countries must also be involved to ensure successful policy execution, tackle systematic inefficiency reverse currently misplaced foci.

Despite the inability to fully eradicate drugs from society, determination and perseverance of governments and law enforcement is crucial. As much in international cooperation as in national and local collaboration. Today is no time of giving up and let organised criminal networks prevail. Neither is tomorrow. But West European countries are at the eleventh hour to begin altering and universalising realistic policies. Equally crucial is steering towards mitigating the impact drugs have on societies and the sway criminal networks hold over governments and societies.

Curious to read more from Ivo Dekkers? Make sure to check out the following article concerning the Captagon drugs business in Syria.

[5] UNODC and Europol. Cocaine Insights: The Illicit Trade of Cocaine from Latin America to Europe from Oligopolies to Free-for-All? Vienna, Austria: United Nations Office on Drugs and Crime, 2021. https://www.europol.europa.eu/sites/default/files/documents/cocaine-insights-1.pdf