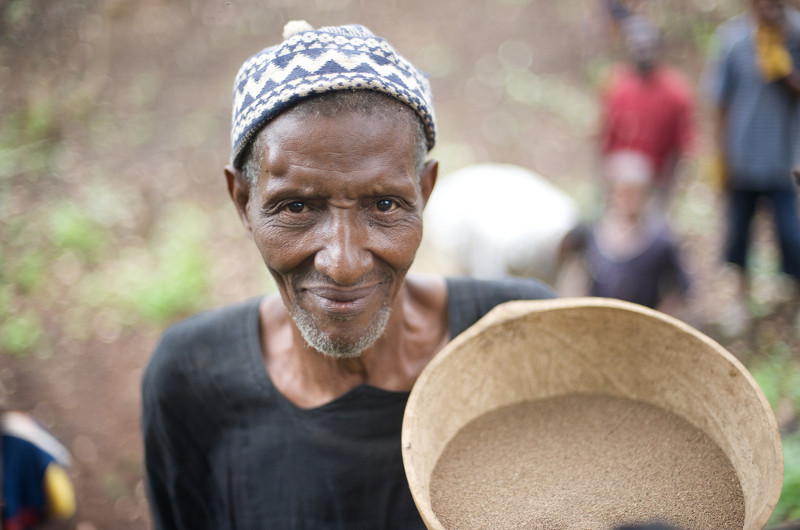 “The silent hunger crisis — affecting one sixth of all of humanity — poses a serious risk for world peace and security.” [1]

The world population is growing, and the arable land is decreasing. For example China has to feed 1.3 billion people, but only has seven per cent of the world’s arable land of which it is losing over a million hectares per year to pollution and desertification.

“Recent academic reports identify that current food production is still sufficient to feed the world’s population today, but lack of investment in infrastructure, logistics and cold stores is leading to massive and irresponsible wasting.” [2]

Even though there is enough food today to feed the world’s population, a part of that population, located in the developing world, is getting neither enough nor the right kind of food, leading to under-nutrition. The reasons for food insecurity are manifold. Gabriele Zimmer [3], member of the European parliament and rapporteur on food security challenges in developing countries, highlights the most significant causes:
• High food prices and price volatility due to excessive speculation on food and agricultural commodities markets;
• Huge land acquisitions by foreign investors in developing countries;
• Trade distortions to the detriment of the poorest;
• A run on fertile land caused by an increasing agrofuel production;
• Underinvestment in agriculture in the global south;
• The negative effects of climate change.

In the following article, some of the initiatives taken and solutions proposed to diminish this problem will be discussed.

This goal is at the top of the list of the Millennium Development Goals (MDGs). The MDGs were drafted during a high-level meeting of world leaders at the 2000 Millennium Summit. Other goals are universal education, gender equality, child and maternal health, combat HIV/AIDS, environmental sustainability, and global partnerships. With the deadline merely three years away, the international community is scaling up the initiatives and efforts to reach the MDGs by 2015.

Some of these goals are interconnected. The eradication of hunger and poverty are already linked to one another, even though they could easily be two separate goals due to their magnitude. Hunger and poverty can also be linked to child and maternal health, which are two separate MDGs. The goal of global partnerships can also be linked to the previously mentioned goals. Kristalina Georgieva, European commissioner for international cooperation, humanitarian aid and crisis response, states that the fight against hunger and under-nutrition “will help tremendously to achieve six of the eight millennium development goals”. [5]

Hunger is one of the consequences of the global food and financial crises. Another consequence is malnutrition. As explained by UNICEF chief of nutrition Werner Schultink, there is a difference between hunger and malnutrition: “Crucially children, particularly in their first 1000 days, will never recover from malnutrition unless they receive targeted intervention.” [6]

SCALING UP NUTRITION
One of the initiatives taken by the international community with regards to the eradication of hunger is the Scaling Up Nutrition Movement (SUN). “SUN brings together over 100 organizations and governments committed to work together to fight hunger and under-nutrition.” [7] It was launched in April 2010 and its roadmap includes taking stock of the national nutrition situation, developing plans for scaling up nutrition and addressing the need for financing of these programmes. The SUN Road Map costs annually $12 billion in order to help 36 countries battle the most serious forms of malnutrition. Compared with the costs of the consequences of malnutrition, meaning disease and lack of economic performance, which amount to $80 billion for the global economy annually, this initiative is worthwhile paying for.

The international community has come together not only by drafting the MDGs and by partaking in the SUN- and 1000 days initiative. Efforts are also made at top level, meaning the G8/G20 and at the regional level such as EU leadership.

Together with EU leadership, SUN has brought child nutrition to the top of the priority list in over 20 countries. “Food security and nutrition were at the top of the agenda of the French presidency of G8/G20.” [8] SUN is supported by another initiative that focuses on the group that is affected the most by hunger and malnutrition, namely children. The 1000 days advocacy initiative focuses on the 1000-day window of opportunity between pregnancy and a child’s second birthday. [9]

CHILD MALNUTRITION
Hunger and malnutrition especially affect children. Therefore, a special initiative targeting this group called Save the Children has been launched. Eglantyne Jebb, an Oxford-educated teacher and sociologist, founded the Save the Children Fund in England in 1919 to aid children in war-ravaged central Europe. Today it “serves impoverished, marginalized and vulnerable children and families in more than 120 nations.” [10] Alex Rees, head of Save the Children’s hunger reduction policy names examples of efforts that are currently improving child nutrition and efforts that could be undertaken in the future:
• Increase the coverage of high impact nutrition interventions, such as breastfeeding, improved hygiene practices, and iron fortification of staple food;
• Tackle the underlying causes of under-nutrition through nutrition sensitive development.

In an open letter calling for an EU policy on nutrition, published in the Parliament Magazine of December 2011 and supported, amongst others, by Unicef, WFP, and several members of the European parliament, the problem of child malnutrition is laid out.

Right now, across the world 925 million people are starving, 178 million of which are children. Over 40 percent of children aged under five in Africa and 35 percent in Asia suffer as a result of hunger and malnutrition. The largest number of children affected by stunting – reduced growth among 74 million children in total – live in south-central Asia. There are three major causes:
1. A world population growing to seven billion in 2011 and to nine billion in 2050, in combination with decreasing arable land, lower agricultural production, diminishing water supply, and a fewer number of farmers;
2. Manmade or natural disasters depriving human beings of essential food and nutrition;
3. A ‘silent crisis’, robbing 178 million children of a life of physical and intellectual accomplishment due to major nutrient deficiencies in their first 1000 days of life.

“If you had an airplane full of children crash every 20 minutes on your television-screens, how long would it be before somebody did something about it?” [11]

The World Food Programme (WFP) is working together with a range of partners, amongst which governments, other UN agencies, civil society, and important private sector companies like DSM.

PUBLIC PRIVATE PARTNERSHIPS AND CORPORATE SOCIAL RESPONSIBILITY
As stated by Stephan Tanda, member of the managing board at Royal DSM, “businesses cannot ignore this catastrophe” [12], referring to numbers of people who are affected by hunger and malnutrition. DSM, a global science-based company active in health, nutrition and materials, has developed many solutions, including the MisMe micronutritient powders sachets or NutriRice fortified rice that have proven very effective to help alleviate malnutrition.

The minister for industry of Indonesia, Mohamed Hidayat, underlines the importance of public private partnerships (PPP) and corporate social responsibility (CSR). Indonesia is one of the few countries that has a special law on CSR, although it does not provide a specific definition of what it actually is. A high-level conference in Brussels, organized by PA International, launched a new, science-based, CSR definition: Corporate social responsibility starts where all existing laws and regulations end; it is an organic link between enterprising, profit-making and social development that is conducted as a win-win solution in areas where a company requires something from society that cannot be bought and requires investment through a business model for the company and a business plan for the society.

83 percent of the EU’s top policymakers and experts would like to see an increase in the role of CSR, while 76 percent seek PPPs in nutrition as part of development assistance. [13]

CONCLUSION
“The proportion of people going hungry has plateaued at 16 percent, despite reductions in poverty.” [14] This would mean that the third item of the first Millenium Goal – halve, between 1990 and 2015, the proportion of people who suffer from hunger – is not on track to meet its goal. The 2011 report shows that in 1990-1992, 20 percent of the people in developing regions was undernourished. In 2005-2007 this percentage has stabilized at 16 percent. Thus, in the coming years, this has to go down to 10 percent. In a period of seven years (1990-2007) the percentage only went down 4 percent. The second half is always the hardest part, for example in sports, and it always goes by much faster than imagined.

It is therefore time for action. In the words of PA International’s chairman Mark Eyskens:

“We must act now, to stem the tide of malnutrition across the world. (…) Successfully combating malnutrition is possible. There is consensus. (…) So let us act, before the end of the year; before the next plane crashes loaded with our children.”[15]