Bolivia’s crossroads: The aftermath of an election gone wrong 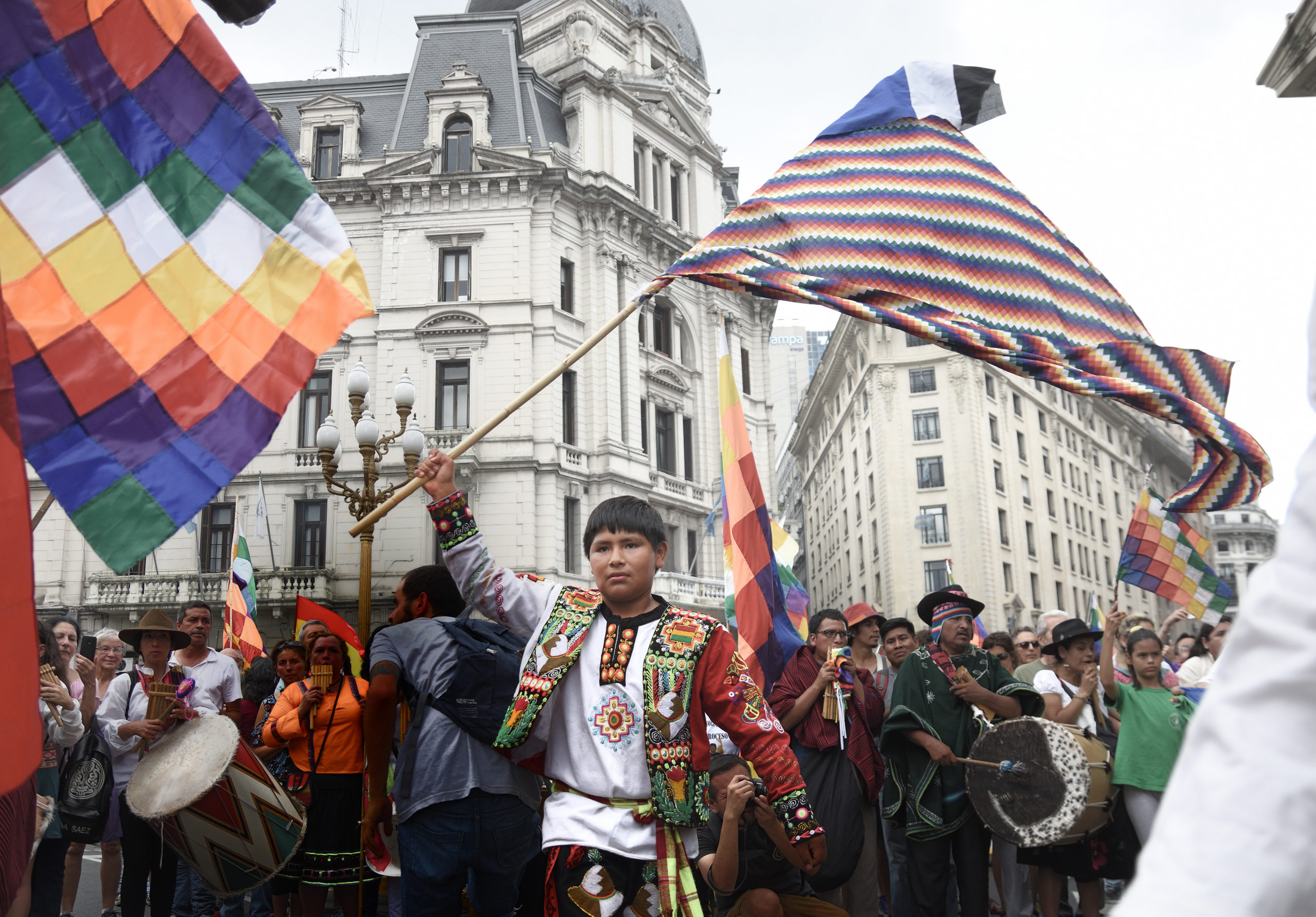 The fall of 2019 saw widespread political unrest in Bolivia, culminating in the ousting of sitting President Evo Morales by the military amidst evidence of electoral fraud. A new right-wing interim government led by Jeanine Añez has taken over until new elections can take place. In the aftermath, Morales fled to Mexico where he sought political asylum. Protests and clashes between Morales supporters and the military have resulted in 33 fatalities. Since the removal of Morales from office, Bolivia’s interim government has cut ties with several traditional allies, while diplomatic relations with Mexico and Spain have taken a turn for the worse. In order to understand the gravity of what happened and the background of recent events, we interviewed Soledad Valdivia Rivera, a lecturer at Leiden University and an expert on the topics of (de)democratisation in Latin America and state-social movement relations in Bolivia. She came to the Netherlands 20 years ago and has retained a connection with her home country, Bolivia, ever since.

Could you give us some historical background on who Evo Morales is, including his indigenous background and the indigenous people in Bolivia?

“Indeed, the indigenous component is very important in understanding the political processes in Bolivia and certainly to try to understand the leadership of Morales. Bolivia went through a period of dictatorships before democracy returned around 1984-1985. A big part of the Bolivian population is indigenous, and this part of the population has historically and structurally been marginalized from social, cultural and certainly political domains of society and was also continuously postponed, rejected and excluded. This has been a constant element that really explains why the indigenous people have struggled for so long. With the return of democracy, many thought: ‘Now is the time, we will have democracy and we will get to vote,’ but unfortunately the opposite happened. Democratic institutions were installed, but these institutions were never consolidated and never became strong. In particular, the situation of the indigenous population remained one of marginalization and exclusion. The division between a small economic elite, usually of Spanish background, was very diﬀerent from the situation of the indigenous people and of the largest sections of society.”

“This changed when Morales arrived to power. It is my perception that from the outside, much is attributed to Morales, as if he did it and as if he was the change. But if you look more closely, as I have tried to do in my research, you see that it is the indigenous movements who are behind this leadership. In 2005, new elections were organized after two presidents went home and Morales was elected as the first indigenous president. He was the product of this process of indigenous mobilization and indigenous political articulation. So, he comes with a very strong and clear agenda to power and very much determined by indigenous movements and organizations.”

“The economy and state almost collapsed in 2008, but eventually a new constitution was implemented. The role of indigenous organizations was very important and this new constitution set a framework from which a lot of indigenous emancipation could take place. At the same time, the Morales administration also implemented a very good economic policy. It was first seen as a misstep to nationalize all natural resources, in which the country of Bolivia is very rich. The nationalization by the Morales administration was also a demand from the indigenous population and the popular movements. Eventually it became widely acknowledged that his administration did very well in terms of economic policy. The third element of the Morales agenda is the implementation of a social agenda as a left-wing leader, also because of the demands from the population. He implements a very large social agenda that immediately has eﬀects on poverty and inequality.”

Could you explain what happened in Bolivia during the past months?

“The recent elections on the 20th of October were said to be rigged and fraud had supposedly taken place. It was interesting to see that days before the election, people were already saying that the election was going to be rigged. This was already in the minds of the people. Then elections took place and there were indications that things went wrong. Facing increasing protests on the streets, Morales issued an audit by the Organization of American States (OAS) and said that if it concluded there was fraud, there would be new elections. That was his way out.”

“Then the OAS came out with their preliminary results, which said that large-scale irregularities had taken place in the process, so it was not possible to trust the results of the election. The people concluded that fraud had definitely taken place. Morales issued new elections, but sentiments were so high, and people were on the streets, that even new elections did not appease the population. Then, the military came in and told Morales that they thought it was a good idea to step down, which basically means: step down. This military intervention certainly is an indication of a coup. Many high-ranking people from Morales’ party started to resign as well. Stories started to come out that these people had been threatened, that their houses had been set on fire, or their families had been taken into custody in order to press them to resign. This also indicated a coup. Even if that has not been the case, one of the first things the new government of Jeanine Añez did by decree was to give the military over 4.5 million euros to buy equipment.”

After years of having stable relations, ties with Venezuela were cut by the new interim government led by Jaenine Añez. Could you explain why that is the case?

“Morales was a left-wing leader and he was part of the Pink Tide, a wave of progressive, left-wing governments that came into power in Latin-America around the turn of the 21st century, with Chavez in Venezuela, Correa in Ecuador, Lula in Brazil, the Kirchners in Argentina and even Michelle Bachelet, a more moderate left-wing leader, but left-wing after all. This interim government, instead of trying to be a middle ground in order to bring people together, very quickly took a position. Añez is a leader from the right-wing, and the cabinet she installed was very right-wing. This was a clear statement.”

“Only when her cabinet was criticized because it did not have one woman or indigenous person in it did they put forward an indigenous woman. The decisions of the interim government are very political and very clear in breaking with everything Morales had done. In a way they are answering to a part of the population that really wanted to break with everything the Morales administration had done: with Venezuela, with Cuba, with US relations and even economic policy. All the directors of the strategic national companies of oil and the national airline have been replaced. The directors of the central bank have been replaced by new ones that are more aligned with the interim government. It is very political and taking very far-reaching decisions that are not what you would expect or desire from an interim government which has no mandate.”

With the new government shifting to the right, alienating some left-wing partners and cutting ties with Venezuela, are there any consequences for Mexico granting political asylum to Morales?

“Mexico has played an important role in recent events. Even before Morales requested asylum, Mexico was very eager to facilitate bringing Morales from Bolivia, and I know from what I have read in the press that the President and his company have received criticism from some sectors of society for giving asylum to Morales. But this was to be expected, so I think that the Mexican government had considered this already. They defend their position by referring to their long tradition of granting asylum to politicians in the region, so in a way Mexico is not doing anything special from what it has always done.”

“Mexico also has a very large indigenous population and a strong indigenous movement, so this is another reason why it was important for Mexico to bring Morales in. He was called the ‘leader of the indigenous people in the world’ and when Morales arrived in a press conference, people were asking the Minister of Foreign Affairs and the President if they were not afraid of the repercussions for their relations with the United States. I think it has been proven that in the days after, their answer was that Mexico always has had a very respectful relationship with the US and that both countries respect each other’s sovereignty, and that the US will respect this too. Mexico sees that this is an opportunity to project itself in wider Latin America, because they have both right-wing and left-wing governments. They can take some sort of leadership, especially now that Brazil, the other giant in Latin America, is so weak. I think Mexico sees that as an opportunity to project itself. In the Venezuelan conflict, Mexico took the opportunity to mediate and did not take a side, as others did.”

The 2019 political crisis in Bolivia brought widespread instability, revealed the tensions between indigenous and non-indigenous groups and led to a radical change in Bolivia’s political alignment and international relations. The question arises how permanent these changes will be, especially considering the outside interests Bolivia has opened itself up to. The interim government has already appointed an ambassador to the US and has cut ties with Cuba and Venezuela. However, on 3 May 2020, a general election will be held to select a new ruling party and president. According to the latest polls, Morales’ Movimiento al Socialismo (MAS) party is poised to win this election. Morales himself is not running for president and has since moved to Argentina to be closer to his home country. Only time will tell if Bolivia will return to a situation resembling the status quo under Morales, or whether the country’s political balance has forever been altered.