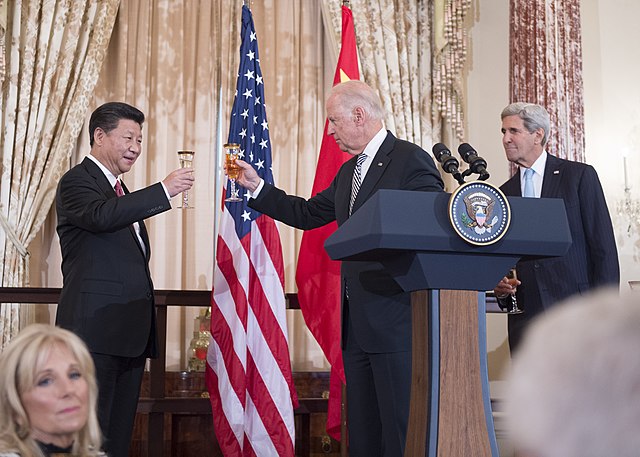 On January 20, 2022, Biden celebrated his first year in office. The start of 2022 has been tumultuous for the Americans. Their eyes are on the East: what is happening in Kazakhstan, what will happen at the Ukrainian border and what will happen in China? The United States is focusing on dealing with the challenges that lay ahead and how to protect western, democratic values. In Biden’s January 6 speech for the anniversary of the Capitol attacks, he drew an image of what the future of the US will be like. “From China to Russia and beyond, they’re betting the democracies’ days are numbered […] democracy is too slow, too bogged down by division to succeed. They’re betting America will become more like them, they’re betting in America is a place for the autocrat, the dictator, the strongman. I do not believe that. That is not who we are. That is not who we have ever been. And that is not who we should ever be”.

On the other side of the globe, the situation is just as interesting. Within a few days, hundreds of athletes will be in China to participate in the Olympic Winter Games, with a few crucial diplomats missing due to the boycotts. Reports of airplanes flying over Taiwan have never been as high and the world is watching hesitantly to see what will happen. Again and again, President Xi seeks to highlight his Chinese dream, also in his 2022 New Year’s speech. For his 2022 prospective, Xi highlighted specific events and objectives: the Beijing Olympic Games, the stability of Hong Kong and in reference to Taiwan, the “aspiration of complete reunification of the motherland”. Next to that, he is seeking to rejuvenate socialism and build a “modern socialist country” to achieve the Chinese dream. As opposed to Biden’s plan, the other superpower in the world is seeking to achieve a political antonym.

The events of 2022 are unpredictable and extremely important for determining the course of history. However, they have been in the works for a long time already. So, to look ahead, we must first look back. How has the US-China partnership evolved in 2021, and what will this mean for 2022? This article will seek to provide answers to these questions by paying special attention to Biden’s China policy in the first year of his presidency and discussing how this built on Trump’s legacy.

At the beginning of 2021, the American public had a clear opinion of China according to a Gallup poll: the public believed that the economic power of China is a critical threat to the interests of the United States (63%), the overall opinion of China is extremely unfavorable (79%), and China is considered the US’ greatest enemy (45%). These perceptions laid down the foundation of Biden’s China policy: he needed to take a strong position against China to fulfill the public’s wishes. Especially after his predecessor had been so assertive in his positions and actions towards China. So, what is Trump’s legacy?

Trump is infamous for his tough attitude towards the Chinese, an attitude which some might consider racist and xenophobic. He was known for his harsh words, and he was similarly strong in his policy. In July 2018, Trump started the notorious trade war against China to eliminate the US trade deficit and promote domestic manufacturing. This war also restricted Chinese access to high tech US products and further limitations on Chinese foreign investments due to security concerns. Despite criticism, Trump went ahead with the plan, which inevitably caused higher costs for manufacturers, higher prices for consumers and other financial difficulties. Between 2018 and 2020, the new tariffs led to a total of 550 billion dollars renewed tax income on Chinese goods. On 15 January, 2020, a new trade deal was signed between the two powers. In the deal, planned new US tariffs would be lifted, and the Chinese would buy billions worth of American products. For Trump, this was a way to “America First”. For Biden, this is a “battle between the utility of democracies in the twenty-first century and autocracies”. But how has Biden dealt with the trade war?

Before being inaugurated as president, Biden confirmed that he would not make any “immediate moves” to lift tariffs. Instead, in a New York Times interview conducted just before his inauguration, Biden claimed that the best strategy was to get their “allies on the same page” regarding China. Next to that, he made it clear that his trade policy would be even more aggressive than Trump’s: his goal would “be to pursue trade policies that actually produce progress on China’s abusive practices – that’s stealing intellectual property, dumping products, illegal subsidies to operations”. To do this, the Americans needed more leverage towards China in the forms of “good old American industrial policy – massive, government-led investments in American research and development, infrastructure, and education”. In April 2021, Biden proposed a 325 billion dollar plan to do this. According to the accompanying analytical perspective plan, the coming R&D investments would include “land, building and fixed capital equipment, regardless of whether the facilities are to be sued by the Government or by a private organization”.

Seemingly, Biden sought to make up for the mistakes that Trump made. However, rather than fulfilling the negative prophecies of analysts regarding Biden’s China stance, he remained firm. He kept the tariffs in place and seeks to fill in the gaps to make the American economy more resilient and future-proof. Whether this slows down China’s rise to power is impossible to answer, but lots of attention (and money) has been allocated to strengthening those areas that have lacked behind.

After passing the National Security Law in Hong Kong, there remained one large eyesore in Xi’s ambitions: Taiwan. The small island in the Pacific has created quite a lot of international tension and the last years have been more nerve-wracking than ever. Like other previously mentioned policies, Trump was also aggressive when it came to Taiwan. For 2019-2020, the Taiwan Assurance act highlighted that “Taiwan is a vital part of the United States Free and Open Indo-Pacific Strategy” and that it should be US policy to help advocate for Taiwan’s participation in international organizations. Furthermore, it also sought to support Taiwan’s defense strategy of asymmetric warfare and encouraged the country to increase defense spending. Similar sentiments were reinforced through Trump’s spending bill for the year 2021, which allocated significant funds to the goals of the beforementioned Taiwan act. Overall, Taiwan received significant support under the Trump administration even though it has a harmful position in US-China relations.

Despite fears from Taiwan that the strong support would decrease, Biden did not disappoint them. For the first time since 1979, the Taiwanese representative in the US received an invitation to the inauguration of Biden. On the third day of his presidency, Biden also used strong rhetoric against the Asian superpower: “we urge Beijing to cease its military, diplomatic and economic pressure against Taiwan” and “we will continue to assist Taiwan in maintaining as sufficient self-defense capability”. All in all, it seemed that Biden was ready to become a clear diplomatic spokesperson on the international stage in favor of Taiwan.

In October 2021, the “most serious” military tension between China and Taiwan arose in more than forty years. On October 1 and 4, a total of nearly 150 planes flew in Taiwan’s Air Defense Zone as part of a “demoralization campaign” towards the Taiwanese population. Yet this demoralization campaign would only lead to heightened tensions between the US and China as well. In an interview with CNN, Biden said that the US has committed to coming to Taiwan’s defense in case it were to be under attack from China. This was a significant shift from previous US policy, which would only provide Taiwan with defensive weapons rather than actual intervention. Despite the White House rectifying that the US had not changed its policy, Biden has made a strong commitment to Taiwan. Many experts wonder: Is this a sign that Biden is willing to change US Taiwan policy from a stronger commitment to actual intervention, or has he simply misspoken himself on numerous occasions? On the other side, China wonders: will the US actually pay attention to our actions in the East China Sea, or will it be weakened and distracted?

Where Biden has been active in restoring and repairing Trump’s effect on diplomatic relations all over the world, he has decided to step into Trump’s footsteps when it came to China. In the first year of his presidency, Biden has proved expectations to be wrong: a “hard” China strategy is on the table. The trade war has been extended and possibly made more future-resilient by pushing more money towards R&D investments in the domestic American market. This might help reduce the damage of the “war” on the American economy and drive more damage towards China. When it comes to Taiwan, Biden has provided a lot of ground for speculation by raising the idea that the US could possibly intervene on behalf of Taiwan in case of an attack. Seeing that these are possibly the most damaging and important topics in US-China diplomatic relations, it can be said that the first year of Biden’s presidency has proved many wrong. US-China relations might come closer to the infamous “Cold War” expectations, as Biden will surely refuse to back down, just like his predecessor.