BETWEEN ALEXANDER AND THE WHITE TOWER 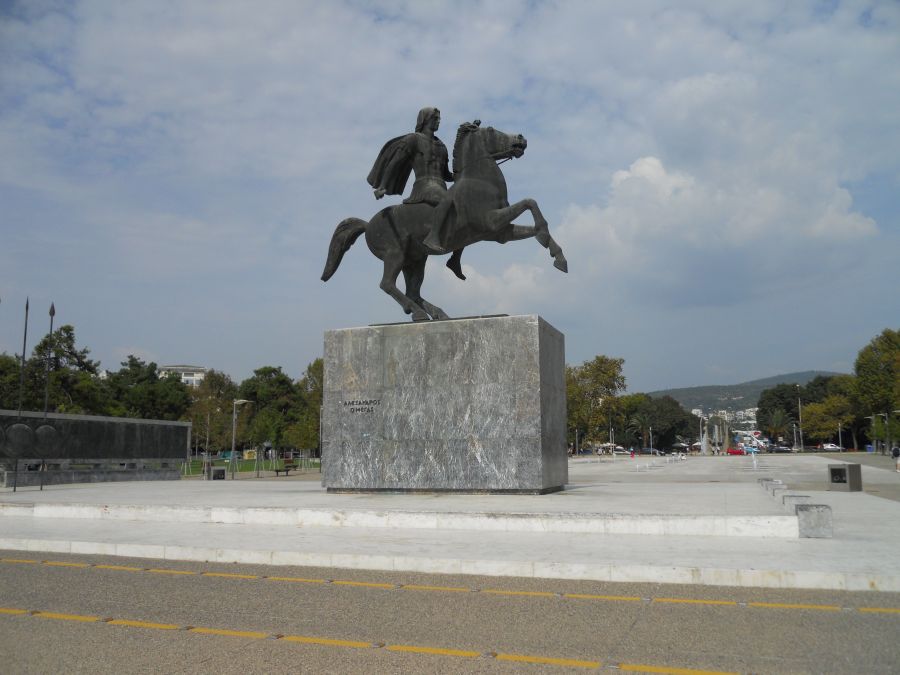 The monuments of Northern Greece and what they tell us about the modern state.

Walking along the promenade on Thessaloniki’s harbour is an eclectic sensory experience. The water lapping beside you is greasy and dull blue with pollution from the nearby shipping yards.  Beyond that lies a pure blue sky and a clear view of unsullied hillsides miles away on the other side of the country’s wrinkled coastline. Immediately on the other side, trendy bars and cafes are full to bursting at all hours of the day. You are frequently assailed by smiling migrant salesmen flogging concert tickets and bracelets.

At various points on the way one is confronted with monuments dedicated to a glorious past which, as such monuments often do, also serve as reminders of present disputes. Until its recent move to a different port, the first you would come across was the moored armoured cruiser, The Georios Averof. Though not much to look at by modern standards, the ship was the pride of the Greek navy when it was launched in 1910. Two years later it would go on to trounce the Turkish fleet during the First Balkan War.

Such a symbol of Greek naval dominance is no mere curiosity at a time when Greek/Turkish confrontation in the Aegean is growing by the day. The tables have turned somewhat now, with an increasingly truculent and obnoxious Turkey throwing its weight around at the expense of a weakened Greece. The former flagship of a bold new nation, obsolete from the moment of its launching but still capable of chasing away a decrepit Ottoman navy, now bobs powerlessly in its dock. Meanwhile, the Greek army, also armed with heavy but obsolete weapons, has to sit tight as Turkish troops menace its islands [1].

Further down the shore, Thessaloniki’s main landmark, the White Tower, stands as a permanent reminder to Greeks of the danger of foreign domination. Built by the Turks on the ruins of a former Byzantine site, the tower is indisputably impressive, an example of Ottoman greatness. Time and the elements have not been kind to the building’s exterior, but amid the weathered greyness, dark patches still stand out beneath the battlements. Local lore would have it that these are the stains left behind by the frequent executions carried out by Turkish rulers in this one-time prison.

The White Tower is not the only place in the city where a graceful exterior hides a more sinister truth. The bars and markets are alive and vibrant wherever you go, but essential infrastructure and services are in permanent disrepair. Where once Greeks seethed under the constricting yoke of Ottoman bureaucracy, now they chafe under the crippling austerity measures imposed upon them by an equally alien power in Brussels.

Amongst locals, the most evident attitude is a deep sense of resigned cynicism towards the country’s leaders, who have never missed an opportunity to betray campaign promises and enforce EU rulings. A careless glance around the local watering holes shows one that young Greeks are not abandoning the habit of relaxed socializing on temperate evenings. Talk politics with them however, and the same motifs of sad resignation inevitably come through.

For hundreds of years the Ottomans purposefully robbed the country and other dominions of its most promising youth, pressing them into service as Janissaries and concubines at the Imperial court. In a mere decade the austerity measures of Europe’s banking class have done a far more efficient job by depriving Greece’s educated youth of any promising future at home. The subsequent brain drain, with over half a million young Greeks emigrating, is robbing the country of those who could drive economic recovery, or indeed resistance [2].

The cruel, predictable swing of the scimitar is long gone from Greece. Instead, ordinary Greeks live in fear of the cruel, arbitrary sweep of financial instability and ruin, aided and abetted by a petty and unaccountable officialdom. Rather fittingly, next the old symbol of Ottoman repression on Thessaloniki’s coast, a replica pirate ship offers tourists rides around the bay.

Beside this monument to great power, an unassuming statue stands. It’s subject, Pavlos Melas, was a hero of the war to reclaim the territory now divided between Northern Greece and the Republic of Macedonia. In retrospect, the symbolic legacy of ancient Macedonia’s name is far more important to most Greeks than control over a patch of Balkan land. If the nearby colossal statue of Alexander the Great overshadowing Thessaloniki’s shoreline isn’t enough to convince you of this, then the size and universal political appeal of the recent protests all over Greece should. Many Greeks are rightfully bitter about the usurpation of their heritage. They also remember its swift acceptance by ostensible allies like the United States, who briskly recognized Macedonian independence [3].

The connection with an age when Greeks mastered the known world and bent history to their will is strained enough at a time when the beleaguered country and its citizens are trapped at the mercy of greater powers. A fight with a small neighbour over its name may appear to be a waste of time and energy, both for Greece’s government and people who should really be protesting that government, but it is understandable when one considers the sheer insurmountably of the other forces ranged against them.

Walter Benjamin traced the sources of fascism to the failure of revolutionary progress. The constant restrictions and humiliations piled upon Greece, and the haemorrhaging of a young generation capable of enacting positive change, could empower those who would seek national dignity via reckless foreign confrontations. The intermingling of seasoned anti-establishment leftist figures with far right politicians at the protests against Macedonia were a clear sign of the latter’s creeping acceptability. As other voices disappear from the scene, the more influence such people will have. Should Greece confront Turkey, whose military leadership has been truly gutted of restraint by a tyrannical, expansionist ruler, this development increases the possibility of violence [4].

The breeze hitting Thessaloniki’s shore is welcome with the daylight, but leaves one shivering when the sun goes down. The bars remain active long into the night. The statue of Alexander lies dark and silent down the coast.