AUSTRALIA’S DELICATE BALANCING ACT BETWEEN CHINA AND THE UNITED STATES 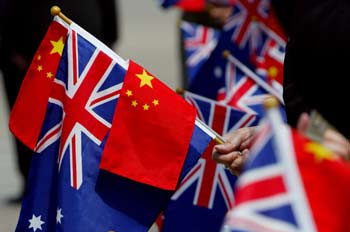 When one thinks of Australia, the initial thoughts that usually come to people’s minds are endless beaches, perpetual sunshine, exotic animals and a country far removed from the turmoil of for instance the Middle East and North Africa. However, Australia is finding itself in a region with growing strategic importance and increasing tension.

With the announcement that France won one of the world’s most lucrative defense contracts worth $40 billion to build a new fleet of 12 submarines for the Royal Australian Navy in April 2016, Australia was in the international geopolitical and –strategic media spotlight [1]. However, the submarine deal should not be viewed as an isolated defense procurement project, quite the contrary. The country is increasing its overall defense spending on a range of various advanced weapons’ platforms such as: Air Warfare Destroyers, frigates, F-35 Joint Strike Fighters and heavy lift aircraft [2]. The rationale behind the decisions is to safeguard the nation’s strategic and trade interests in the Asia-Pacific region as the United States and its regional allies are increasingly trying to contend with China’s growing power [3]. However, Canberra is walking a fine line and needs to strike a delicate balance between its long-term ultimate security guarantor, the United States, and its largest trading partner, a more assertive China.

The Australian Defence White Paper of 2016 is more forthright than its predecessors in that it accentuates that the bilateral relationship between the United States and China will be the most important factor in shaping the country’s strategic future during the upcoming two decades [4]. Australia’s strategic relationship with the United States is underpinned by longevity and familiarity and built on mutual interests and principles; the aforesaid attributes can hardly be used to describe the Australia-China relationship [5].

The term “rules-based” is used repeatedly throughout the Defense White Paper in order to describe a robust U.S. presence in the region, which has come to underpin Australia’s strategic thinking for the last 70 years. Paragraph 2.8 states that “the U.S. will remain the pre-eminent global military power for the next two decades”, however the previous Defence White Papers had predicted a U.S. military supremacy for the “foreseeable future” [7]. To put it more bluntly the “rules-based order” is coming under challenge and permanent U.S. dominance cannot be guaranteed as we are moving towards a different era characterised by intense great-power competition and challenges to the “rules-based” system which Australia has been accustomed to for so long [8].

Australia’s economic relationships in the past have predominantly been with the British Empire, the United States and Japan. The relationship with China is a first in its history in that its most important economic relationship is with a nation with very fundamentally different views in relation to governance, politics and values [9]. The political relationship, from an Australian viewpoint, is permeated with concerns pertaining to Chinese investments in Australia, ongoing disputes over territory in the South China Sea and the arrest of ethnically Chinese Australian citizens in China, just to name a few. Australian Prime Minister Malcolm Turnbull labeled Beijing’s action in relation to the South China Sea as “counterproductive” and the litmus test was mainly whether China “as the big rising power”, was “promoting harmony or […] creating the potential for tension”, accentuating long held Australian views [10].

However, there have also been zeniths in the political relationship; in 2013 there was an agreement between Australia and China to establish a prime-ministerial level dialogue between the two nations, making Australia one of only a handful of nations to enjoy such a dialogue [11]. The aforementioned developments accentuate the intricate relationship which exists and is likely to continue to be one imbued with complexities between the two nations for the conceivable future.

It is evident that even if the latest Defense White Paper does not explicitly state so, Canberra is subscribing to a strategy which bears the hallmarks of a continuing engagement with China while at the same time also hedging its bets [12]. It is a strategy which is intricate and arduous in its nature however the right one moving forward as the U.S.’ “rules-based” system cannot be guaranteed for the “foreseeable future”. By adopting the outlined strategy, Australia is aligning itself with almost every other country in the Indo-Pacific region, which views China’s increasing assertiveness with growing suspicion and is subsequently altering their strategic calculations to meeting the new realities.