AN UNSTABLE PATH: RECENT US INTERVENTION IN LATIN AMERICA 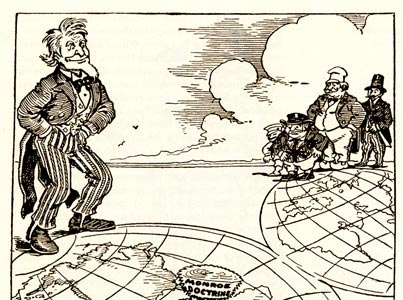 The current US administration, led by Donald J. Trump, has made no effort to hide its animosity and perhaps even disdain towards Latin America. Mexico, due to its porous border with the northern giant, has been at the receiving end of most of the remarks; from the ‘bad hombres’ who had moved north to rape and loot, to the ‘Build the wall’ chants that could be heard at Mr Trump’s rallies. Nevertheless, while a small segment of public opinion may be mobilised by these remarks, the consequences of policy are the real issue for the continent.

On 18 May, the US government announced sanctions against eight judges at the Venezuela Supreme Court who are loyal to President Maduro. This freezes any assets in the United States belonging to them, and also bars US businesses from engaging with them. In this way, the US government is trying to pressure the Court into stopping its obstructive measures against the Venezuelan National Assembly. While in principle this sounds like a worthy measure, it could backfire: it could be seen as another example of US interventionism in the country, a throwback to the days of Latin American Banana Republics. [1] And it may make other countries wary of applying similar measures or pressuring the Maduro government for fear of being seen as following the US lead. In the end, the measure could just be seen as an example of the ‘tough leadership’ model of the current US president, but the lack of understanding of the fundamental issues that have plagued countries like Venezuela means these measures may have unforeseen and undesirable effects.

As for Mexico, the so-called Mexican war on drugs has, by conservative estimates, cost at least 80,000 people their lives since 2006. [2] It has been argued time and time again that the spiral of violence is at least partly due to the thirst for drugs in the United States, but poverty and youth unemployment certainly contribute to making the cartels an attractive, if fickle and dangerous, employer. The first push of Mr Trump towards re-negotiating the North American Free Trade Agreement (NAFTA) has done nothing to reassure Mexicans that their country will be better off. While attempts have so far failed, a closing of the borders of the sort that Mr Trump proposes, with higher import tariffs for Mexican agricultural products, would only exacerbate the dire economic situation in those states hardest hit by violence.

And then there is the wall. Should the US President get his wish, it would again hit those most likely to live in impoverished areas, with few prospects of work and of a decent future for them and their children. The first effects of such a border policy were already felt under the Obama administration, when Mexicans and Central American citizens who had committed crimes were deported as a matter of policy, and have only become more visible with the latest wave of deportations that target all undocumented migrants, not only felons. [3]

The unpredictability and acerbity of the measures enacted by the current US administration have been oil to the already burning fire of discontent in those countries. Further, the lack of clarity about the purpose of such measures helps to fan the flames. US actions show a lack of basic understanding of the delicate threads that give shape to US-Latin American relations, and they could put more pressure on already taxed political lifelines. It could well be that this type of US intervention would lead to the situation in these two countries deteriorating further. The US has been a constant in the political lives of Latin American countries and, because it is still the most powerful actor in the region, its actions carry weight. The current US administration should learn to exercise that power carefully. Whether his happens, only time will tell.