What the science of planetary boundaries means for environmental policymaking

Posted at 18:47h in Online Articles by Jason Institute

International ecological treaties do not adequately consider the interconnectedness of the Earth’s ecosystems. This is illuminated through the science of planetary boundaries, a framework [2] that outlines key ecological processes and the current level of their transgression by human activity. Developed by 28 scientists under the guidance of Johan Rockström from the Stockholm Resilience Centre [3], the framework outlines nine processes crucial for maintaining conditions favourable to human life, among which climate change is only one. Two of the nine boundaries are currently more transgressed than climate change but receive less attention. In the rare instances that policymakers turn their attention to the lesser-known environmental challenges, they tend to take a siloed approach and treat the challenges as separate issues. By not accounting for how ecological processes interact with each other, such an approach risks undermining the effectiveness of the little [4] climate action that there currently is.

As populist politicians painfully exposed [5], easy fixes to complex policy problems sell well, even if they are far from reality. Today, most of humanity is already impacted [6] by the reality of an environmental crisis, one that encompasses much more than an increased concentration of the wrong gases in the atmosphere. To ensure that humanity can live happily ever after 2100, environmental policymaking needs to take an integrated approach.

A singular problem in a web of connections

The research [2] on planetary boundaries, first published in Nature in 2009, came from a scientific observation that the past ten thousand years have been marked by unprecedented climatic stability. During that period, known as the Holocene, the Earth’s conditions allowed for a thriving and resilient development of human life. However, since the Industrial Revolution, climate scientists have started noticing disruptions to climatic stability, driven mainly by the reliance on fossil fuels and industrial-scale agriculture. The disturbances became so great that geologists now talk about a shift to a new geological epoch – humanity has left the Holocene to enter Anthropocene, where human activity is the main driver behind ecological changes.

Planetary boundaries are a quantitative attempt to establish the level of human activity within which the Earth’s conditions remain favourable for human life. The study’s authors identified nine key processes ensuring optimal conditions to support human life on Earth. Such conditions are called a “safe operating space”. The 2009 study and its 2015 follow-up [7] managed to quantify this space with previously unknown precision.

The group of 28 scientists measured the state of our planet’s ecosystems and the extent to which human activity has impacted them. The crucial nine processes are climate change, biosphere integrity, biogeochemical flows, ocean acidification, ozone depletion, freshwater use, land-system change, novel entities, and aerosol loading. Each of them has a threshold – a boundary that, upon crossing, causes a given process to enter a new state, potentially less friendly to humans. 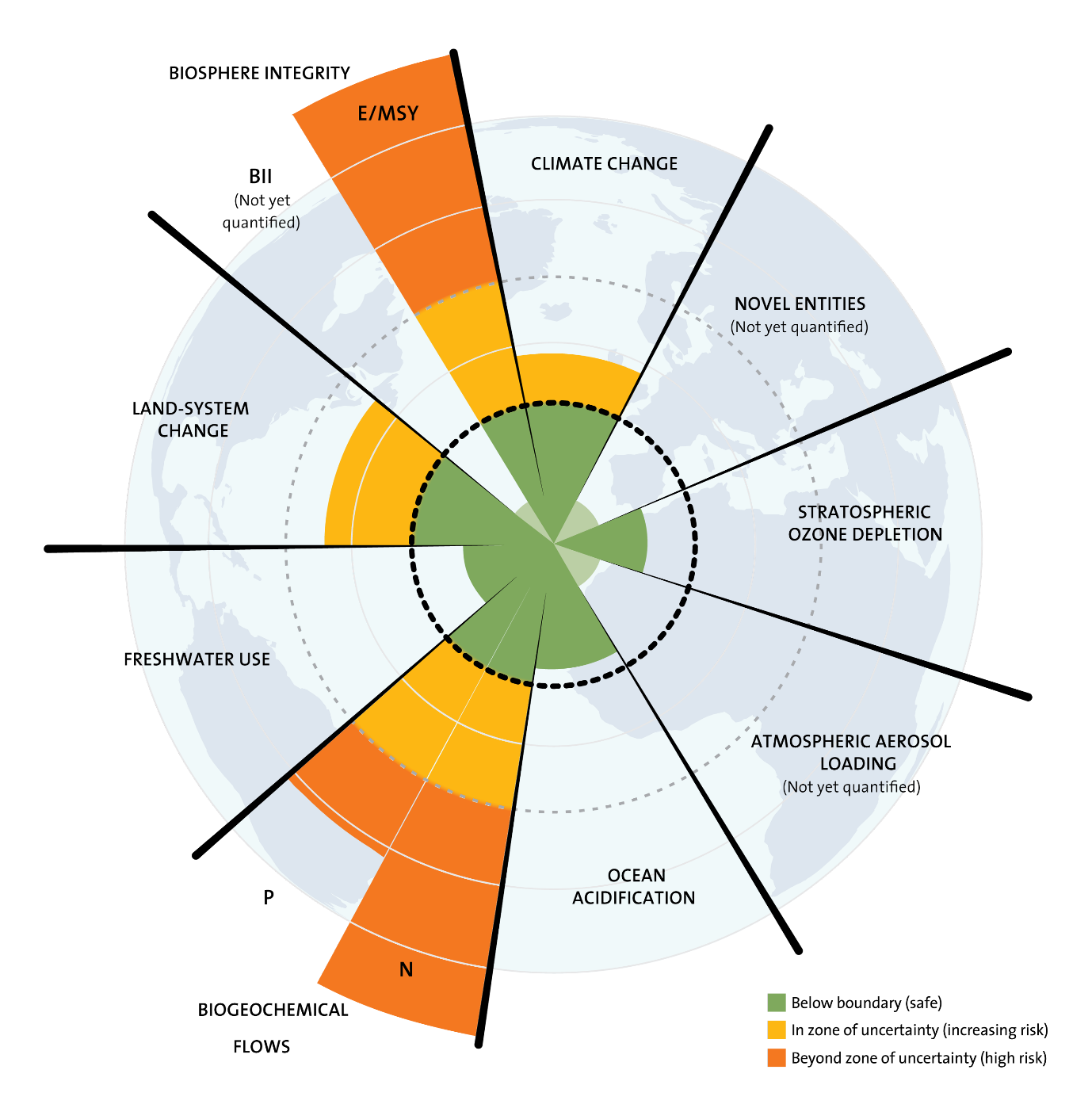 The sheer number of crucial ecological processes reveals how misplaced the policy focus on climate change is. Climate change is just one among the nine, and its boundary is not the most transgressed. For reasons of scientific uncertainty and strategic communication, the study’s authors placed [8] the proposed boundaries well before reaching the maximum threshold. This placing means that crossing the boundary between “safe” (marked green) and “uncertain” (marked yellow) should be regarded as an early warning system rather than an indication of reaching an environmental tipping point. This “buffer zone” gives humanity some time to adjust our actions before the intervention into the ecosystem becomes irreversible.

Once a boundary crosses the zone of uncertainty, the process’ state becomes more pressing than an early warning. If boundary transgression is taken as a criterium, there are more urgent environmental challenges than climate change. Biogeochemical flows and genetic diversity, part of the biosphere integrity boundary, are in high-risk [7] zones (marked orange). On the other hand, climate change is only the fourth most transgressed boundary, measured as an “uncertainty zone” behind land-system change.

Not all boundaries are equal – climate change and biosphere integrity are considered [2] “core” because each can potentially change the ecosystems on their own and substantially if transgressed. Yet, while the biosphere integrity boundary has entered the mainstream debate, in part thanks to its mediatised, dramatic title of a “sixth mass species extinction”, the biogeochemical flows one remains little known. The action gap between climate action and any other environmental activity is so broad that the ongoing inaction can do severe damage despite the transgressed boundary not being a “core” one. Even more so once the interconnectedness of the processes is accounted for.

More than the sum of its parts

The impacts of any boundary transgression impact some of the other boundaries, triggering a complex reaction whose consequences can be predicted only in a limited way. The biogeochemical flows, the most transgressed boundary to date, illustrate such a potential chain reaction. The flows refer to the concentration of two naturally occurring elements: nitrogen and phosphorus. Both are crucial for producing food, yet mass-scale agricultural food production has led to the transgression of their boundary. Artificial fertilisers caused more [9] nitrogen to be pumped into the natural cycle on Earth than all natural processes combined.

The increased proportion of the element starts to interact with other processes in a cumulative and often unpredictable way. Among other consequences, it creates new, potent greenhouse gases, such as nitric dioxide, which strain the climate change boundary. As climate change is a core boundary, its transgression triggers further deterioration in different processes. The might of the boundary lies particularly in its ability to trigger the so-called “runaway effect” – a self-reinforcing process that forces [10] Earth systems into a freefall. For example, climate change drives additional species extinction, crossing the biosphere integrity boundary. It does the same to the ocean acidification boundary. This transgression can cause ocean acidification and climate change to get locked in a feedback loop. Ocean acidification enhances global warming by reducing the ocean’s capacity as a “carbon sink,” which further enhances acidification. A higher concentration of nitrogen-based gases in the atmosphere may also trigger the novel entities boundary, which deals with chemical pollution. The subsequent unpredictable transgressions are the gravest threat to the stability of the Earth’s conditions, which is not considered enough when all eyes are fixed on climate change.

Dangers and opportunities of climate focus

If systems interconnectedness is not accounted for, climate change-focused policies may have the unintended side effect of worsening a different boundary. For example, carbon neutrality efforts may prove detrimental to the biosphere integrity or novel entities boundaries. The former can be impacted through excessive yet unbalanced re-forestation – planting a forest monoculture in an area of, for example, biodiverse meadows. Large-scale investments into “green” energy, such as solar or wind, may help deteriorate the novel entities boundary if done with only climate change in mind. Renewable energy technologies require large amounts of rare earth metals. The metals are sparsely located and contaminated with heavy metals, so if they are extracted – as they are now – as cheaply as possible, they are likely to contaminate the environment for the price of “saving” the climate. Each of these actions can potentially lead to a future where the temperature is kept to a liveable level, but air pollution or lack of genetic diversity continue to threaten humanity’s survival.

However, the interconnectedness of the Earth’s systems brings potential opportunities alongside challenges. Understanding climate change as a non-singular, interconnected policy challenge opens doors for new solutions to tackle it. If policymakers embrace the idea of planetary boundaries, preventing, for example, ocean acidification will become as high a priority as reducing greenhouse gas emissions. Such an approach offers interconnected improvements – in this case, preserving marine biodiversity. Simultaneously, switching to sustainable agriculture should be framed not as a food production choice but a climate change necessity that can prevent further straining the boundary of the biogeochemical flows. The improvements in land-system change will be an added beneficiary.

It is not environmental issues that shape geopolitics, but rather [11] geopolitics that decides the future of the environment. During this unprecedented ecological crisis, the search for geopolitical security needs to start with mitigating crises, not barely reacting as they happen. Therefore, heads of government and national environmental policymakers must play an active role in keeping their national environments within the planetary boundaries to prevent disasters.

Accounting for complex interconnectedness promises the most effective outcomes. The world needs environmental, not climate policies – flexible and adaptive rather than focused on efficiency or optimisation. Designing policies with complexity at their heart means looking for leverage points instead of linear solutions. Such points are elements of a system that cause a chain reaction – positive or negative, depending on the intervention – on several systemic aspects at once. Focusing on leverage points will allow policymakers to discover new ways to mitigate climate change while improving other environmental challenges. To do so, however, policymakers need to work closer than ever with environmental and systems scientists.

An integrated environmental approach will require a reform of environmental organisations. They will need a transformation from single-focus departments to holistic nets that share information and understand the impact of one alteration on the whole Earth system. The required organisational change is profound but not as great as the economic, demographic, and political changes that will follow a failure to act on the environmental crisis. There is still time, but the changes need to be implemented swiftly. The most recent prediction shows [12] that the Earth’s temperature will reach +1.5 degrees Celsius above pre-industrial times in 11 years. Some ecosystems, such as the coral reefs, have already underwent [13] irreversible changes, and many animal species are lost [14]forever.

The story of stratospheric ozone depletion offers a glimpse of hope that transgressed boundaries can return to an optimal state. After phasing out freons under the Montreal Protocol, the ozone layer is slowly coming back to within its safe boundaries. Now the success needs to be repeated on a planetary scale. The city of Amsterdam is a useful example. The Dutch capital embraces [15] a novel economic model, called “Doughnut economics” [16], to guide its post-COVID recovery. This model is based on planetary boundaries and systemic interconnectedness. It assumes, for example, improving the city’s housing situation through implementing sustainable building regulations. This way, a systemic social intervention accompanies environmental mitigation.

To paraphrase Antonio Guterres’ address to the UN Climate Action Summit in 2019, it is time that policymakers transform beautiful speeches into concrete plans. A world in a crisis needs a holistic crisis emergency response.