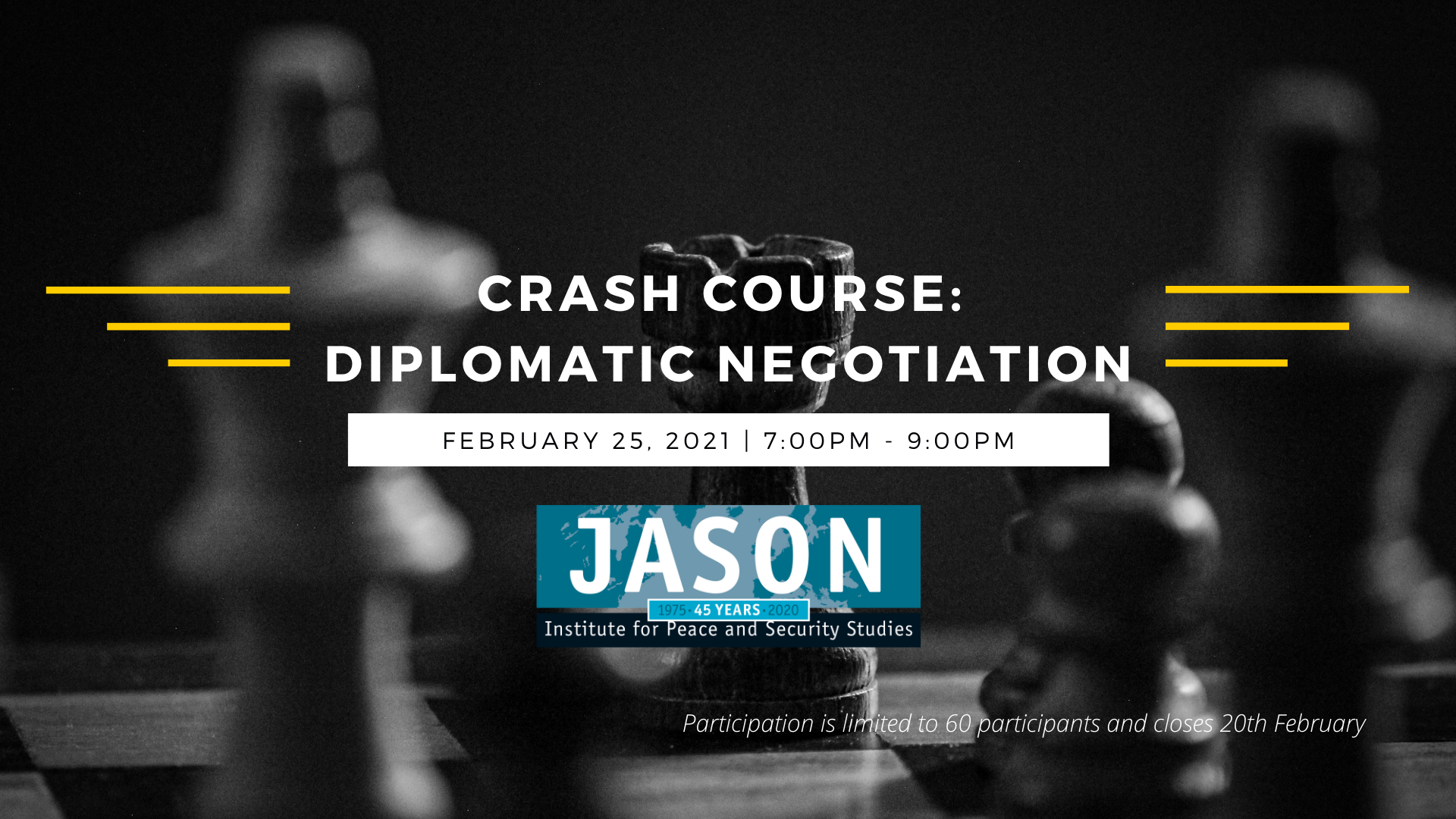 Posted at 20:15h in Reports and Photo's by Jason Institute

On February 25th, the JASON Institute for Peace and Security Studies organized a Crash Course in Diplomatic Negotiation. The objective of this event was to get students and young professionals that are interested in topics such as diplomacy, mediation, and negotiation acquainted with the practice of diplomatic negotiation.

The interactive webinar consisted of two parts. During the first part, our guest speaker Dr. Sinisa Vukovic gave a lecture on the basics of diplomatic negotiation. We were very glad to welcome Dr. Vukovic as our guest speaker, as he is an expert in International Mediation, Negotiation, and Conflict Management. He is a Senior Lecturer and Associate Director of the Conflict Management Program at Johns Hopkins University, and he is a visiting Assistant Professor at several highly acclaimed universities, including Leiden University. In his presentation, Dr. Vukovic used his expertise to teach the attendees about the theory and practice of diplomatic negotiations.

After this lecture part, the attendees engaged in a simulation where they could put their newly acquired knowledge to the test. They were divided into groups of five and were instructed to participate in a negotiation about a fictional crisis situation in Algeria. The attendees were asked to represent various European countries during a meeting of the EU Council. They discussed questions regarding the evacuation of EU citizens, the suspension of aid programmes, the possibility of an arms embargo, and the provision of humanitarian aid. In order to represent their respective countries well, the attendees were provided with a guiding text and a scoresheet. During the simulation, the negotiators had to balance their personal objectives with the ambitions of the EU Council as a whole.

After the simulation had ended, all the groups reconvened for a debriefing session with Dr. Vukovic. During the debrief, the groups had the opportunity to share their experiences about the simulation. In this way, the results of the various groups could be compared and contrasted. Dr. Vukovic also provided a clarification of the results and gave advice to the attendees on alternative strategies that they could have pursued. At the end of the event, there was a Q&A session where the attendees could ask questions to Dr. Vukovic about his presentation, the simulation, and about diplomatic negotiation in general.

We would like to thank Dr. Vukovic and all of the attendees for making this Crash Course in Diplomatic Negotiation such an informative and engaging event!