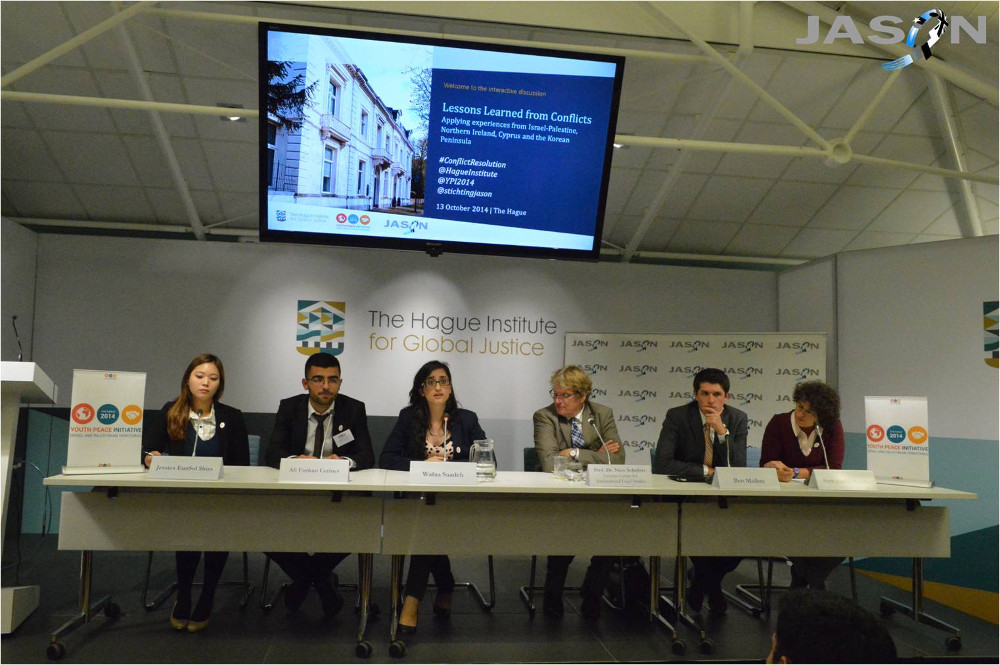 Posted at 13:06h in Reports and Photo's by admin

On Monday the 13th of October, The Hague Institute for Global Justice hosted a public event organized by JASON Institute, The Hague Institute and the Youth Peace Initiative 2014 (YPI2014). Over 140 participants from all over the world attended the discussion on finding possible resolutions for conflicts in the world’s conflict regions based on lessons learned from history.

First, prof. dr. Nico Schrijver, Academic Director of the Grotius Centre for International Legal Studies and chair of the evening, gave a brief introduction in which he stated that in the field of international relations and international law, it often comes down to the meaning of a certain word that determines the legal and political consequences of it. As an example he asked if, referring to Palestine and Israel, we speak of a wall or a fence. Additionally he stated: “The power of negotiations between (two) parties should never be underestimated.”

Dr. Abi Williams, now President of The Hague Institute for Global Justice, was the second speaker this evening. His broad experience in the field of International Relations formed the base for his speech, as the topics concerned UN missions to keep peace (or enforce peace) in (former) conflict regions Macedonia, Bosnia and Haiti. “Some countries have more history than they can digest. They, we, need to remember the past but should not be held captive by it.” The focus for resolutions should lie, according to Williams, on youth. “Progress is not inevitable in the field of International Relations as it is not inevitable in the field of Science and Technology. Each generation has to carry on in building a world of order and justice.” But, as Williams stated, to find resolutions for conflicts, there should be at least the political will to make the difficult choices that go beyond the conflict. “Peacekeeping or -enforcement can never be a parliaments solution to a conflict.”

After a short break, young adults coming from the world’s conflict regions, stated their opinions about possible conflict resolutions. They all seemed to agree on the idea of respectfully remember each other’s history and from there on build a better future. Wafaa Saadeh (Palestine) stated that she “and all the Palestinian people are done with death, hate and killing and peace can be achieved.” Perle Judith Novelle (Israel) pointed out the power of society: “Society is the key to solve this conflict. Maybe the core issue is how we can bring society together to agree on solving this problem, finding resolutions to this conflict.” A lively debate followed as the public intervened with questions on leadership, the influence of education in conflict regions, legal agreements and – as Nico Schrijver already seemed to have predicted in his introduction – about the meaning of words. What, for example, means ‘peace’?

We can conclude that it is very complicated finding possible resolutions for conflicts. Resolutions that have a fundamental political base and are spread by those who can show true leadership. To achieve that, it seems we have to start by defining the different meanings of words we use to find those resolutions, to start finding ways and time to build trust and show empathy. After all, as Novelle stated this evening: peace itself is a process. And youth might play a key part in that.