THE BATTLE FOR CRIMEA 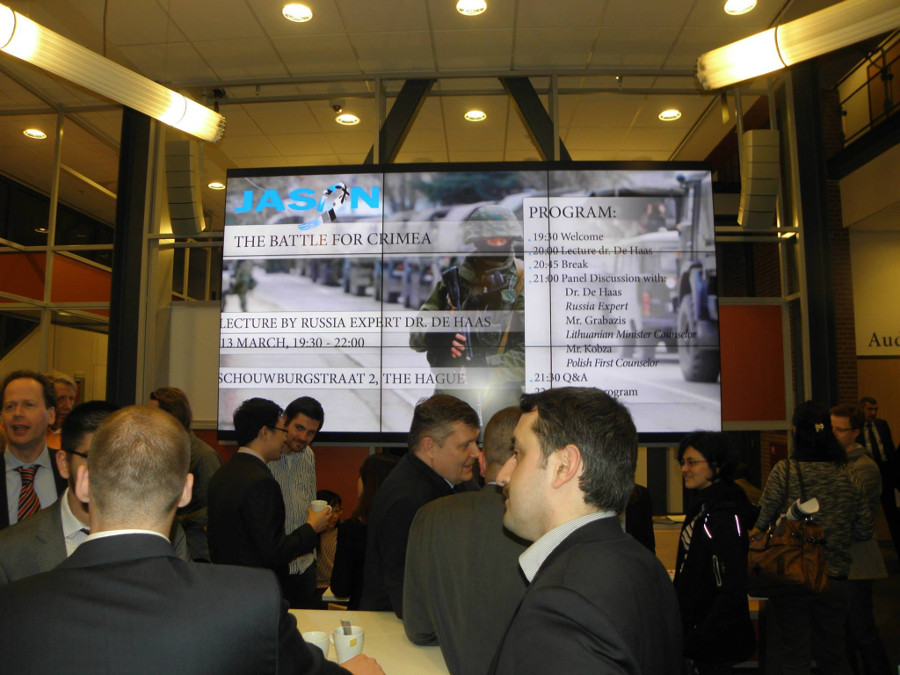 13 Mar THE BATTLE FOR CRIMEA

Posted at 13:09h in Reports and Photo's by admin

On March, 13 ‘The Battle for Crimea’ symposium took place, organized by JASON institute. It was opened with a presentation by Lieutenant-Colonel (ret.) Dr. Marcel de Haas, the Russia defence and security expert. In a very detailed presentation, packed with military figures, facts and legal excerpts, Dr. de Haas highlighted the following issues: the Russian military action in Crimea, relevant principles of Russia’s security policy and its violation of the military agreement with Ukraine and of international law. He proceeded to make a comparison with the Georgia conflict in 2008 and concluded with an overall assessment of the situation.

After the break a panel of experts elaborated on the current and future Russia-NATO partnership and analyzed the events in Kosovo as a possible precedent for the current situation in Crimea. The panel included Dr. de Haas, Minister Counsellor Ernestas Grabažis from the Embassy of the Republic of Lithuania, and Counsellor Piotr Kobza from the Embassy of the Republic of Poland. During the Q&A session with the public the experts touched upon the legitimacy of the current government of Ukraine, as well as Ukraine’s prospects for the European integration. The present Ambassador of Ukraine to the Kingdom of the Netherlands H.E. Mr. Olexander Horin also took the opportunity to answer these questions broadly. Mr. Grabažis reminded the audience of Lithuania’s experience with Russian occupation and annexation, accompanied by the illegitimate elections. During the discussion, Mr. Kobza insisted on refraining from military-influenced zero-sum game inspired rhetoric as unbefitting for the 21st century.

Due to the time constraints the meeting had to be adjourned, but the lively discussion with some beverages continued well past closing time. Representatives of Russia have taken active part in those subsequent discussions. Unhindered by the lights switched off and the building being closed for the night, the exchange of opinions went through, proving that the symposium was a timely and necessary event.