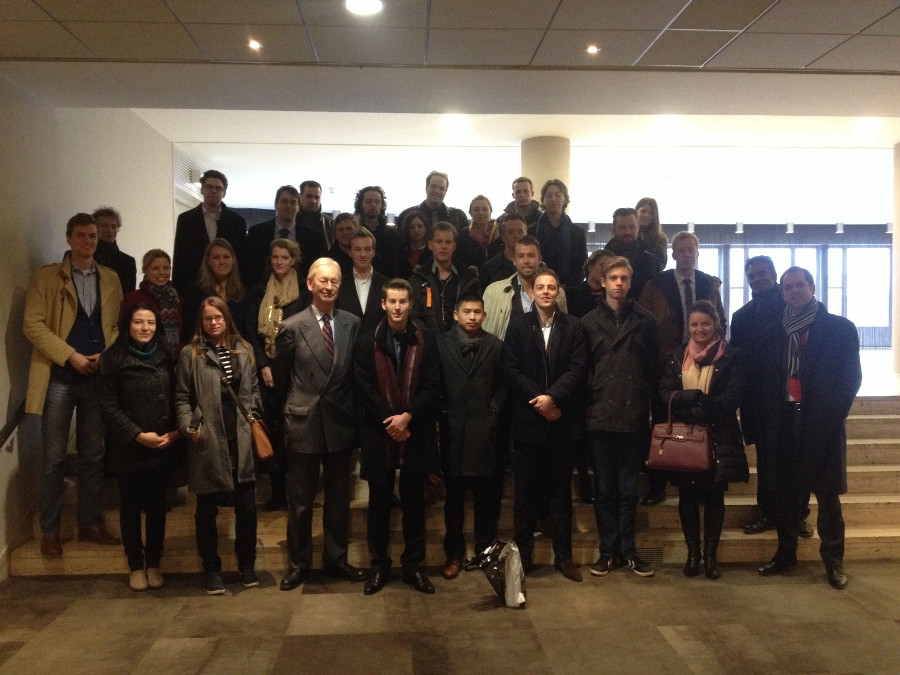 Posted at 13:10h in Reports and Photo's by admin

While the preparations in the Hague World Forum are in full swing, a select group of students and young professionals received on 14 February a special tour through this complex that will host the 57 countries and organisations during the Nuclear Security Summit (NSS) on 24 and 25 March . The group was welcomed by Kees Nederlof, Sous-Sherpa for the NSS, and Paul Wilke, Senior Research Fellow at Clingendael Institute. Both gentlemen gave a short introduction in the NSS and its meaning for the Netherlands and the rest of the world.

Kees Nederlof elaborated on his role as a sous-sherpa, a Nepalese title that connotes ‘bringer of the leader to the summit’. He explained how much this summit is prepared in detail, with a small group working on the political side (i.e. communiqué) of the summit and a large group working on its logistics. The 2014 NSS is the third summit (after Washington and Seoul), but probable not the last one as a lot of issues remain unresolved. Its goal is to enhance nuclear security and not, as some people think, to promote non-proliferation or nuclear energy.

The next speaker, Paul Wilke, explained that the International Atomic Energy Agency (IAEA) is only an observer during the summit as its task is to check whether countries adhere to the Non-Proliferation Treaty. This treaty is not about nuclear security, but about limiting the number of countries with military nuclear technology, while allowing countries to use nuclear material for peaceful and civilian purposes. However, the danger of terrorists stealing this civilian nuclear material (like radiation rods from a hospital) and creating a dirty (nuclear) bomb led to the decision of president Obama to create the NSS in order to enhance international nuclear security. However, most of the discussions during this and previous summits will be about the security of civilian nuclear material as it remains too politically sensitive to discuss the military nuclear material of countries. Bolder steps in this regard may be taken in the side events of the summit, in which the nuclear industry and NGO’s will discuss nuclear security.

After the introduction by both speakers, Bart Beltman, Senior Policy Officer at the Dutch Ministry of Foreign Affairs, gave a tour through the building explaining how the Hague World Forum will be remodelled for the summit. The building will be divided in red (for the leaders), blue (for the delegates), yellow (for journalists) and orange (for press conferences) zones, which will be only accessible by a limited number of people for security reasons, but also because the rooms are not big enough. Bart Beltman showed the different rooms in which the leaders will meet and explained how they will be refurnished. For example, the floor in the now sloping main auditorium had to be raised in order to create enough space to accommodate a big enough table for the leaders present and a few members of their staff. No detail is left unattended for the biggest summit on Dutch soil. Each delegation has its own liaison, who will accompany them during the day and will even ensure that the delegation’s leader sits in the right chair at the table. The complex will also host a 24-hour kitchen and IT-service desk to ensure that all delegates and leaders are well fed and connected.

The tour revealed a little of the enormous amount of preparation that precedes this historic summit. After years of detailed planning and preparation, the Netherlands will be ready to receive the leaders of 52 states and four organisations (UN, EU, IAEA and Interpol). They should remember that they will walk in the footsteps of the students and young professionals that visited the Hague World Forum with JASON Institute.