​CONFRONTING AND DEFENDING DEMOCRACY IN PARAGUAY 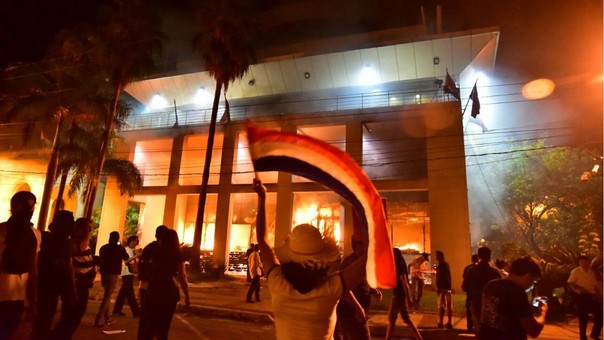 Paraguay is usually a discreet country and normally avoids the watchful eye of global Western media. The country has yet to reach the international political and economic prominence other Latin American countries enjoy. Paraguay seemingly keeps to itself. Developments are quickly glossed over, and little attention is paid to the country, something I myself am guilty of too. Hence, I was surprised to read about the riots in the capital city of Asunción and the consequential plunder of the legislative palace last month.

The news that we are usually exposed to regarding Paraguay is fairly limited and, added to the fact that I rarely give much thought to the country, I assumed Paraguay was quietly standing on the sidelines of major global occurrences, minding their own business and getting by. Little did I know that a few months ago the so-called ‘heist of the century’ took place on the border between Paraguay and Brazil, which involved the robbery of an estimated $40 million, a two-hour shootout and the death of three gang members and one policeman. Earlier in 2012, the former President saw his term cut short as he was impeached over his inability to solve clashes between farmers and police forces. Events of major importance in their own right.

His replacement was Horacio Cartes of the Conservative Party, who earlier in April attempted to sneakily adjust the Constitution in order to be able to run for re-election in 2018. This gesture divided the country and was not well received by many Paraguayans, who claimed it was an undercover coup. The capital city of Asunción soon saw itself faced with large protests, which in turn led to confrontations with the police. The disturbances happened to coincide with the annual board meeting of the Inter-American Development Bank, a supposed time for Paraguay to enjoy more international attention than usual. The uprising eventually concluded with an attack on the legislative palace, which was set on fire, and the death of a young activist, with several of injured policemen, journalists, and protestors.

The dictatorship of Alfredo Stroessner, which only ended in 1989, is still very much present in Paraguayans’ memory, and the possible threat of the return of totalitarianism quickly sparked anger. It was no minor disturbance; several Paraguayans felt it was a direct threat to democratic legitimacy, especially given the fact that Cartes hid his Constitutional amendment from the public. The masses took it to heart, as the attack and raid on the legislative palace proves. The government was hit with a direct and clear reaction, an obvious demonstration of public distaste.

Actions like raiding and attacking the major governmental institutions, in this case the legislative palace, have historically marked a turning point in social movements. From the Bastille in the French Revolution to the Chilean coup against Salvador Allende in 1973 and the siege of Colombia’s Palace of Justice in 1985, they all marked a social rift and shaped further political developments. Yet, in Paraguay, it has not seemed to have the same effect.

Soon after the popular outburst, Cartes’ government quickly withdrew their attempted amendment, even though they seemed to topple the first domino and sparked an apparent political crisis. The main political powers in Paraguay are now faced with the challenge of overcoming the social annoyance and political differences that Cartes’ administration has stirred up. Therefore, dialogue has been established and a collective approach has been taken to try and best resolve the situation. The first attempts, however, have proved fruitless due to political disparities and interests.

Nonetheless, this is a promising development given the history of political uprising throughout Latin America, which persists until this day – as current events in Venezuela show. It’s a quick turnaround from Cartes’ initial decision, and it is remarkable that Cartes and his administration were able to put their independent views aside in order to favour national development and democratic discussion. Paraguay’s cultural memory is still heavily linked to the Stroessner dictatorship and their recently founded democracy is still something the population cherishes and is desperate to preserve. The mere possibility of a violation to their democratic values sparked a rapid and direct reaction, which had an immediate effect. However the problem is yet to be resolved, and it is down to the political powers in the country to enable Paraguayan democracy to get back on track and ensure that the protests and uprising that put them in this situation do not become the only viable option for the country.